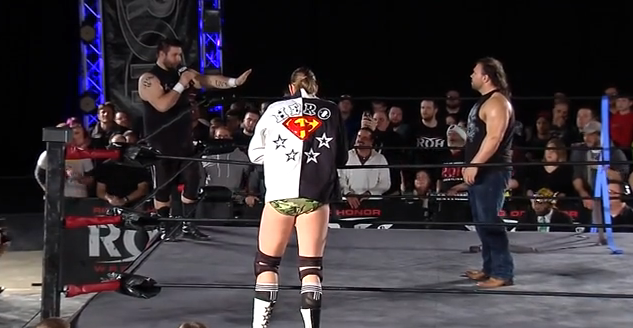 This week’s episode opens with clips from the Final Battle main event, including the closing moments where Matt Hardy showed up and assisted his protegé Adam Cole in retaining his ROH World Title and the return of Chris Hero. After the opening animation, we head inside the Nashville Fairgrounds where Prince Nana has joined Kevin Kelly and Steve Corino in the booth. They talk about the impending return of AJ Styles, which happens in three weeks time!

Our opening match kicks off the 2014 Top Prospect Tournament. Of course, Matt Taven won last year’s tourney and used the win to springboard to a lengthy Television Title reign. Rowe looks like a dude that would be tending bar at your local dive back in 2007, right down to the douche Mike Napoli beard. Hey Kongo back in the house! Kongo’s tights are… certainly something. Nana thinks Rowe is going to win the whole thing. Kongo smacks the piss out of him early, laying in some stiff shots before coming up empty on a splash in the corner. The finals of this tournament take place in Pittsburgh at the end of the month. PTBN will be representing! Corino reminds us he was the runner-up in the 1995 ROH Top Prospect tournament. But he was number one in my heart. And he still is. Kongo is busting his ass here, taking it to Rowe on the floor and then coming back in and dropping a muscle buster. Rowe battles back with a release German that looked great on the big man. The fans are digging this and so am I. These guys are in hyperdrive, working to impress and it makes for a fun atmosphere. Rowe charges but bounces off Kongo and goes flying to the mat. Rowe locks in a full nelson and lifts Kongo for an Uncle Slam but knees him in the back on the way down for the win. Poor Kongo. Great showing by both men with limited minutes to work with. Rowe could be a player, but we shall see.

Michael Elgin marches to the ring, where Kongo is gathering his bearings. They have a staredown that ends with a backlist and powerbomb (!) to take the big monster out. Elgin looks like he dropped some weight. Break time.

When we return, Elgin is still with us, cutting a promo. He calls out Cole, vowing the chase is far from over. He puts more pressure on and says Hero is just another guy in his way. And right on cue, the man himself saunters out to the ring to a very warm welcome. Hero talks about their upcoming elimination tag team match in Pittsburgh, but after that it will be every man for themselves. Kevin Steen then decides to join the fun. He is still pissed that he never received a rematch after he lost the title way back in April. Steen promises to kick Hero’s ass in tonight’s main event. Everyone heads out as we hit commercial.

After a break, we are told the Benchmark Bill Daly will be competing in a tournament match. However, when he emerges from the curtain, he is wearing a suit. He also has a smaller dude with him. His name is Will Ferrara and he is wearing tights and carrying a large placard. He says Daly has changed his life forever and officially introduces him. Daly said he has suffered a high ankle sprain and has been told by his agents, trainers and sponsors to withdraw from the tournament to heal. He instead just demands a shot at the TV title instead. Ferrara’s placard has all of Daly’s sponsors on it. Apparently Cory Hollis will advance by forfeit. Or maybe not, as some other dude is in the ring with Hollis and offers to take Daly’s spot. Hollis accepts and we are on. The other guy is Mike Posey, Hollis’ parter in Alabama Attitude.

I am assuming this isn’t former ECW referee Mike Posey? Yes, I am. Odd choice by Hollis, showing some honor but possibly giving up his tournament slot. KK is ripping Daly but Nana defends the move, as does Corino. Hollis is flying early, crashing into Posey, who had bailed to the floor. Corino says Hollis is diabetic because he hates candy. Posey has gained control, dropping five rapid fire leg drops for a near fall. Corino says five leg drops is too many and that it only took one to beat the Iron Sheik. My man. There is still some debate whether or not this is a tournament match or if Hollis has already advanced. Posey grabs a near fall and is pretty locked in here as the feeling is he wasn’t happy about being left off the original tournament roster. Hollis shakes off an enziguri and clocks Posey with a clothesline from behind for a near fall. Posey comes back with a neck breaker and then comes off the top with an Alabama Jam for two.  Hollis battles back and cracks Posey with a big back elbow for the win. OK, good, I would have felt bad for poor Hollis if he lost his slot. Nana takes off and Corino admits he didn’t understand a word he said. Break time.

Kevin talks about how C&C broke up at Final Battle after losing yet another tag title match. They split amicably and now move on as singles competitors. KK talks about the adjustment Coleman will now have to make without CA in his corner. And that tough road begins tonight against Lethal. KK tells us that Lethal has actually been challenged by new TV Champion Tommaso Ciampa. He gets a lot of props for that, but as Corino reminds us, Lethal is the one that knocked Ciampa to the sidelines in 2012. Corino talks about the tough transition from tag to singles. KK refuses to do his special Eddie Edwards call after Lethal dives out into Coleman on the floor. KK tries to get Corino to admit he was involved with Adam Cole and Matt Hardy, but Corino again denies it. Lethal gets dumped to the floor but Coleman preens and gets dragged out instead. He is able to fend off Lethal and kick him in the head. Back inside Lethal gets a quick comeback but eats a boot on a charge, which allows Coleman to head up top and crash off with a leg drop to a standing Lethal. Lethal survives the cover but he is on his heels. Coleman does keep hesitating between moves, showing he may be a bit unsure in his first singles match back. Lethal goes for the Lethal Injection, but Coleman dodges it and snaps off three Northern Lights suplexes but still can’t put Lethal away. After a stalemate, Lethal hits the Lethal Combination and then scampers to the top rope but Coleman flies over and takes him down with a headscissors into in an STO for two. Coleman follows with a series of punches, but Lethal fires back and hits the Injection for the win. That was a very nice match and a good showing for Coleman as he tries to climb the ladder. Lethal grabs the mic and apologizes for underestimating CC, but he took him to the limit and knows he will have a bright future in ROH. He also accepts Ciampa’s challenge.

When we return from break, Chris Hero is making his way out for his first ROH match since January 20, 2012 in Philadelphia, where he lost to Michael Elgin. He gets a very warm welcome, adorned with streamers from the Nashville fans. Steen’s response isn’t too shabby either, so we should expect a hot crowd here. Hero gets a pretty big pop for any hold he grabs in the early going. KK speculates about Hero’s elbow pad and whether or not it is loaded, reminding us that he flattened Adam Cole with it at Final Battle. They battle back and forth before resetting and sharing another quick handshake. KK wonders how Hero may have improved or changed in his time away. Corino wonders what he has learned that could take him to the top. Steen unloads a big standing dropkick but takes a bit too long to celebrate it, allowing Hero to land one of his own, followed by a senton for a near fall. Hero stalks around Steen as we take a break.

When we return, Steen is in control and he shoves Hero off the apron and into the steel barricade. Steen is focusing on the back, which Corino points out will also affect the neck to help set up the piledriver. Steen tosses Hero back inside and flies in with a slingshot senton for two. The fans are split, as noted earlier. Hero kicks his way back into control and then follows with a running forearm to smash Steen in the face in the corner. KK reminds us how close Hero came to becoming ROH World Champion back when he challenged Eddie Edwards. Steen goes for the package piledriver, but Hero wriggles free. Steen maintains hold and hits the F-Cinq for a near fall. He then heads up top and flies off with a senton for another near fall. Both men are back up and trading blows until Hero just shoves Steen down for a near fall. Corino talks about how he competed against Paul Diamond for USWA in 1997 at these very Fairgrounds. The fans are really loving this one and are quite fired up. Hero catches a charging Steen with a roaring elbow but can’t keep him down. As they battle, BJ Whitmer, Roddy Strong and Jimmy Jacobs come out to run interference. The distraction allows Steen to stagger up and catch Hero with a nasty sleeper suplex to pick up the win. I bet Hero didn’t take too many of those moves over the last two years. Corino says Whitmer has always been a no good piece of garbage. KK plugs AJ Styles one more time as Steen walks to the back victorious. However, as he almost to the back, Cliff Compton pops out of the crowd and viciously chokes out Steen with a cable cord. Wow, that came out of nowhere but was a great cliffhanger finish.

Well, 2014 has officially kicked off in ROH and the stage is set for some pretty good storylines and pushes. The top of the card has gotten quite heavy and it will be interesting to see how things shake down as we move along. Plus, the additions of Styles and Hero will help add some fresh main eventers to the mix. If the company can also blend in some new faces in the lower mid card to start grooming, they can restock and freshen up the company quickly. OK, we are out, until next week, take care and respect the code

Be sure to tune into Place to Be Nation next Wednesday night, January 22, for the debut of the Kevin Kelly Show!