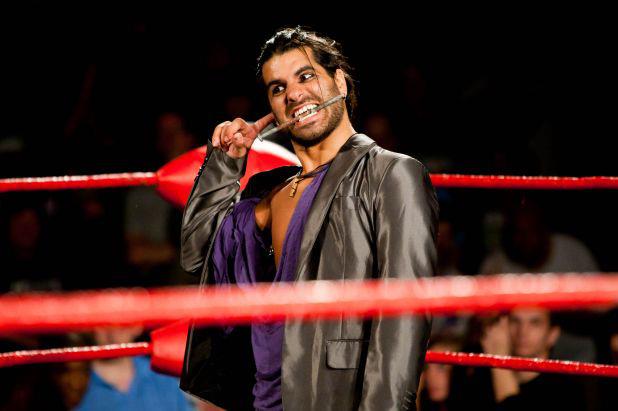 We open the show by going back and recapping the entire BJ Whitmer story, starting with the Michael Bennett piledriver that messed his neck up badly back in August, threading through to Whitmer announcing his retirement at Death Before Dishonor XI. Part of his retirement speech included him bringing out Jimmy Jacobs and asking Nigel McGuinness to give Jacobs an opportunity to prove his honor and regain his job. And with that, we hit the opening animation before heading inside the Philadelphia National Guard Armory, where Kevin Kelly and Nigel welcome us to the show and send us to the ring.

The Last Real Man, baby! Nigel tells us that Jacobs will get a five match showcase to prove himself and if he wins three of them, he will get a shot at the ROH World Title. KK details the long history between Jacobs and Whitmer, setting up the story of redemption that begins tonight. Silas cuts a wonderful old school heel promo on the Philadelphia morons that cheer Jacobs, just months after he tried to destroy the company with SCUM. Tell them, Silas! He also believes Jacobs just used Whitmer when he was at a very low point. Young keeps bringing the goods, saying Jacobs is an example of the pussification of the American male, a self-entitled, second chance seeker that always got a trophy, win or lose. Amazing. Sadly, the bell sounds and Jacobs crunches Silas with a spear for the quick win. Sigh. Poor Silas. Jacobs has his first win, just four more bouts to come before he regains his gig. The Silas promo was fantastic.

After a break, we revisit Adam Cole’s promo from a week ago, which included a visit from Michael Elgin and Jay Briscoe, leading to a faceoff between the two top contenders. We then join the American Wolves, who talk about their singles matches coming later tonight. Richards likes to deliver his promos with a Frank Costanza style inflection. A. Halting. Way. Of. Speaking.

Nigel discusses his reasons for bringing Marvin in, basically answering the requests of ROH fans. Marvin, who debuted in 1995, is a mainstay of various promotions around the world, including Japan, Mexico and a variety of South American nations. Things are a bit slow to start off as we get some feeling out and various tests of strength. KK mentions how Marvin still does calisthenics, so I assume he works out with Scott Criscuolo. Davey gets dumped outside, where he is driven back into the guardrail by a Marvin dive to a great reaction from the pro-Marvin crowd. He shakes it off and heads back inside, where he is able to turn the tide by floating Marvin on to the top rope and slams his knees up into Marvin’s gut. Davey continues to hammer away before grounding Marvin to keep him out of the air. Marvin is able to land a couple of comeback blows, but is too dinged up to take advantage. He finally does get back into it, picking up a near fall as we take a break. Upon returning, the two are fighting on the apron, teasing a German and triggering a “please don’t die” chant from the fans. They sort of ignore it, as Marvin sends both of them flying to the floor as he snaps Davey down with a headscissors takeover. Marvin continues to pop the crowd, this time with a big time moonsault off the top and to the floor. Back inside, Marvin cracks Davey with a dropkick and picks up a near fall before Davey is able to deliver an Enziguri and German suplex. Davey’s head and neck are dinged up, though, and he is unable to convert into a cover. Davey dodges a moonsault, but Marvin lands on his feet and nails Davey with a series of superkicks that the American Wolf somehow survives. The crowd loved that sequence and have been with the match the whole way through. Davey gets a close near fall with a roll up, leading to a series of right hands and kicks. Marvin comes back with a clothesline and powerbomb for two as Nigel is openly rooting for him at this point. This one may never end as Marvin survives the double stomp. We get some convoluted reversal sequence that includes the referee, but that leads nowhere. Davey cracks Marvin with a stiff clothesline and brainbuster to finally put his one away. The match was spotty and hard hitting, but both excel in that style, so it was an entertaining watch. The live crowd really loved it and led to a nice atmosphere overall. Made sense for Davey to win since Marvin isn’t sticking around.

When we return from break, Veda Scott interupts KK and Nigel as they break down the previous match. She demands that Nigel review a document and claims it must be done immediately. Apparently it is more paperwork dealing with Steve Corino. Nigel heads to the back to review further as we hit the ring for our main event.

Steen is out first, but as he is settling into the ring, he is jumped by Michael Bennett, who crunches him with a piledriver. Steen is down and out as Bennett mocks him and KK reminds us that these two argued over their respective piledrivers a week ago. After a break, Elgin is still hurting and EE is slowly heading to the ring. Steen battles to his feet and demands that Todd Sinclair start the match, which he reluctantly does. EE tries to reason with Steen, but Steen shoves and slaps him to get him going. EE finally gives in and kicks Steen to the floor. EE follows with a kick to the face and a springboard moonsault. Steen is clearly hurting as KK wonders if Sinclair should stop the match. EE is still hesitant, but continues to work Steen over. KK goes old school and mentions that ROH has a “standby match” ready to go so they can fill the hour if needed. Steen refuses to stay down, so Eddie just keeps it coming, but seems to be gaining zero enjoyment from it. After our final break, Steen lands a blow but is way too hurt to capitalize. KK continues to blame Bennett for this mess. As he does, Steen catches EE on the floor and slams him off the apron with a powerbomb, and then follows with another. Back inside, Steen hits a senton bomb off the top, but EE kicks out. EE finally slows him up with a Boston Knee Party into a near fall. After a series of near falls and reversals, EE is able to get the Achilles Lock, but Steen forces the break. He blocks a chinchecker and sends EE flying with a sleeper suplex for a near fall. Steen goes for the package piledriver, but his neck prevents it, allowing EE to roll him up for the win. Considering the storyline that had to be woven through here, these two delivered a very good match. Steen’s selling was enjoyable and EE did a nice job conveying the various emotions throughout. I am really looking forward to this Steen/Bennett feud as it continues to develop. And right on cue, KK tells us that the two will face off next week on TV.

Well, hard to complain about an hour of TV that included those last two matches. Toss in a hot crowd and some good storyline development, and this was a plus show to close out October. We took a week off from the World Title fiasco, which was nice, as it allowed some other storlylines to breathe. I am curious where the Jacobs angle is going as well. Next week, we get the first in ring stop in the Bennett/Steen feud and some more action from Chicago, so until then take care and respect the code!