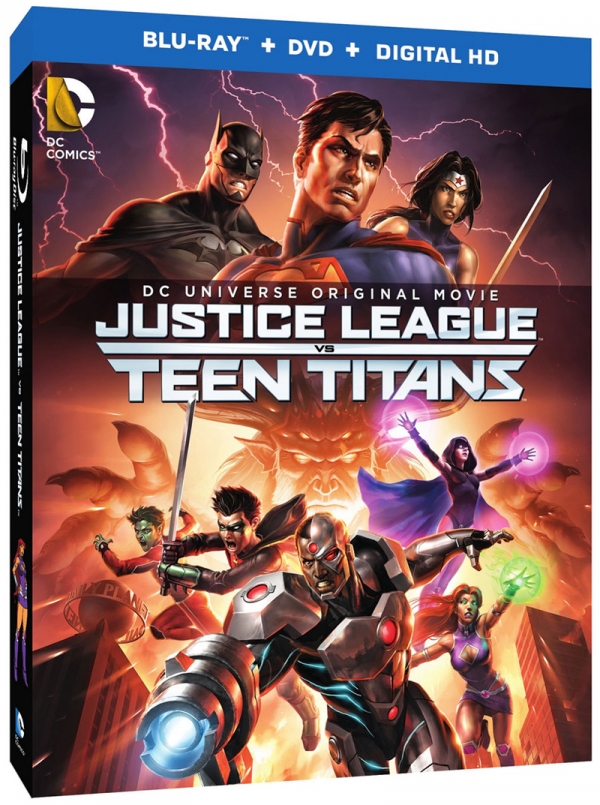 As the DC Animated Universe continues to expand its interconnected films that started with Justice League: The Flashpoint Paradox, naturally new concepts are being introduced.

When bringing in a group like Teen Titans, it’s easy to get bogged down in exposition and trying to establish who the characters are and, more importantly, their motivations.

Fortunately, writer Bryan Q. Miller and director Sam Liu craft a story that’s pleasing for both long-time Titans fans and those who’ve never experienced them before.

As an introduction to the Teen Titans concept, the movie treads some familiar territory, especially for those who watched the animated Teen Titans show and/or Young Justice from Cartoon Network. But the film manages to keep the lineup small enough to keep the narrative focused, but large enough to include some classic TT moments for more long-time fans.

This story acts as a loose sequel to the previous movies in the interconnected DCAU, including Justice League War, Batman vs Robin and Batman: Bad Blood.

The opening scene, while loaded with cool action scenes, is a bit of an odd choice. The Justice League fends off an attack by the aptly-named Legion of Doom, led by Lex Luthor at the opening of the new Hall of Justice. The attackers’ motives are never addressed, but lurking in the shadows is a much larger threat.

When a demon possess Flash villain Weather Wizard, Robin (aka Damian Wayne, son of Batman) takes matters into his own hands and puts the team at risk. Batman, on the advice of former Robin Dick Grayson, sends Damian to train with a group of young heroes, organized by Dick’s on/off-girlfriend, Starfire.

Miller’s script really starts to shine once Damian is in Titans Tower. The interactions with Blue Beetle, Beast Boy and Raven are some of the best writing this current series has had yet. The chemistry of the team is evident from the outset and while Damian seems at odds with all of them at first, he’s a natural fit for their ragtag group.

The larger plot should seem familiar to long-time TT fans, too. Trigon, voiced chillingly by John Bernthal (Walking Dead, Daredevil Season 2) is slowly escaping his prison in Hell and he’s coming for his daughter and Teen Titan, Raven.

Trigon’s forces eventually take control of the most powerful members of the Justice League and it’s up to the Teen Titans to put differences aside and work as a team to take them and Trigon down. What follows is some of the most gorgeous animation and fluid fight scenes this studio has turned out… ever!

While the plot might not be the most in-depth story every put to paper, the interactions and characterizations of both the Teen Titans and the Justice League couldn’t be more spot-on. Miller’s script might also be the funniest of the DC Animated movies. From Beast Boy’s wise cracks to Batman’s subtle questioning of where Cyborg’s food goes without a stomach, it’s never a dull moment.

Pacing is never an issue and this movie proves that even a well-worn story can still feel fresh and worth revisiting again and again.

All of the cast do an excellent job capturing their voices again, as most are returning from previous Justice League films such as Throne of Atlantis and Son of Batman. Damian is, as usual, the standout and Stuart Allan’s portrayal is becoming as synonymous with the character as his sword and hoodie.

Damian’s emotional journey has become the central part of this universe and it’s one that’s a blast to explore every time he’s on screen. His personal growth from one film to another has been astounding and he truly proves to be his father’s son in this one.

Putting Damian and Raven together as the central focus could have gone awry, but Miller’s characterizations of them makes for a natural fit. The two provide an interesting balance to one another as they both struggle with demons, literal and figurative. And it’s that dynamic that begins to inform the rest of the team’s attitude toward Damian as the film progresses.

What this movie does best, though, is give viewers a reason to care about each of the characters. Even if a ton of information isn’t given about each of them and their origins are largely glossed over (with the exception of Raven), the connections are easy to make. These characters feel real and that’s the mark of a great animated feature.

Not to mention the complete mark-out moment that is seeing Cyborg and Starfire team up with the younger heroes to battle demon forces in Hell.

Oh, and those who loved Teen Titans growing up, be it animation or comics, stick around for a mid-credits scene that’ll definitely have you excited for further TT movies.