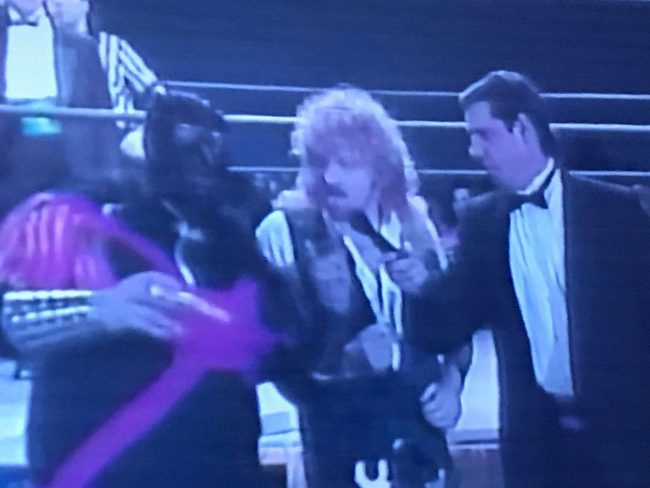 I will go with the big non title tag team match. The Suicide Blondes looked damn good in there and hung right in with the new champs. Larry Winters is continuously enjoyable each week while Tony Stetson is a bit up and down. His house of fire segments need some work, but they are a quality white meat face team. The match was solid but the post match was really good as I enjoyed the attack in the aisle. It seems like this feud isn’t quite over despite the result in the match.

Paul E. Dangerously and Don Muraco were great this week. It started out of the gate with Paul shouting down Tod Gordon and Muraco cutting a strong promo and then continued with a solid match between Muraco and Glenn Osbourne. Paul was great doing ring introductions and chilling with Jimmy Snuka at ringside too.

It wasn’t really much a surprise I guess but Max Thrasher turning on poor J.T. Smith came out of nowhere. Other than that, this was all pretty straightforward this week.

“Max Thrasher”; That fucking Larry Winters mullet, it is glorious

We start off hot out of the gate with Paul E. getting in Tod Gordon’s face while being backed up by Don Muraco; Muraco follows that up with a strong promo too; It was a good match and moment but not sure we had to watch the entire Tag Team Title match from last week again here; Good to see Max Thrasher back again this week for this big rematch; Eddie Gilbert’s tights are pretty sweet; Snuka just destroys guys with the Splash these days; Stevie forcing Jay to call Hotbody “Sir Jonathan” is pretty funny; Sal Bellomo wanders out in a mask and claims to be Super Destroyer #3 for some reason; the Suicide Blondes have looked very good in every match so far and they break out a real nice double dropkick here; Tony Stetson’s house of fire wasn’t very hot; The finish to the tag team match was really confusing thanks to Stevie throwing out random DQ comments; The Madman… From the Badlands!; Snuka standing outside with that cocky smirk was great; Sulli saying Osbourne had a “heart the size of a house” made me laugh; Muraco rally has just mastered his cool swagger in matches, slowly moving around and just taking advantage of mistakes where he can; the Dangerous Alliance/Hot Stuff International stable just looks awesome; We close the show out with a big time Heavyweight Title bout and this time the ladies are banned from ringside, much to the dismay of Stevie; Sandman is so awkward in the ring; We died up getting that catfight between Tigra and Peaches after all; We get one last visit from SD #3 and some pizza before we wrap up