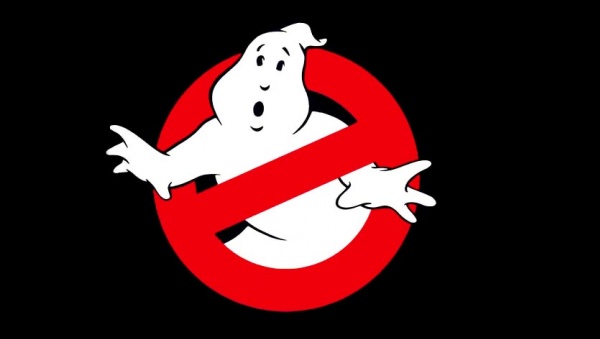 Ghostbusters Music Video (1984) Ray Parker, Jr. Ghostbusters Original Motion Picture Soundtrack Anybody that knows me well, or even more specifically listens to every episode of the Place to Be Podcast, knows I love me some traditions, holidays and themed episodes. I have always been a sucker for yearly Halloween, Thanksgiving and Christmas TV show specials and we have carried that over into the podcasts. While the Christmas music catalog features hundreds of songs done over thousands of times by millions or artists, Halloween has a very limited theme canon, but the ones that do exist are doozies. In 1984, the motion picture Ghostbusters was released worldwide and made big time box office bank. The beloved film had a loaded cast, an original concept and biting humor mixed into a wild story. And of course, what also added to the sheer awesomeness was a helluva fantastic theme song that was written and sung by the impeccably 80s looking Ray Parker, Jr. Parker was tasked with creating a catchy theme song and was only given a few days to do so. The song actually charted, hanging in at #1 (!) on the Billboard Hot 100 for three weeks and at #1 for two weeks on the Black Singles chart. Parker even earned an Oscar nomination for Best Original Song and one analyst went as far as to estimate that the popular song added nearly $20 million to the box office revenue. However, just because the song charted well and was praised and recognized for being so fantastic, that doesn’t mean the video wasn’t the perfect encapsulation of the absurdity of the mid 1980s.

The video fades up on an apartment building as night has fallen on New York City as a babe (we shall call her Candy) slowly enters inside, not sure what to expect. And then she enters. And I immediately have no idea what is going on. There is a bunch of waiting room style furniture that is highlighted by neon light tubes of various colors like some sort of futuristic seedy massage pallor front room. She obviously feels comfortable in this Jetsons atmosphere because she takes off her jacket and scarf to get comfortable. Bad timing because that is when things get uncomfortable for everyone else. The grand knight of funk himself, Ray Parker, Jr. emerges from thin air and starts scatting across the screen as the song really ramps up. 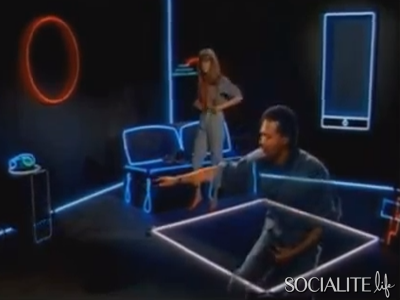 He must truly be an apparition because she doesn’t seem to notice him or his perm as he starts to belt the tune out. All of this makes sense when you consider the context of the song, but what doesn’t make sense is why we need to have three young children, who I assume are orphaned since they are milling around this joint, peer around the corner to belt out “GHOSTBUSTERS” during the hook. That bumped the creep level to a robust 6 on the Lionel Richie Hello scale. The bee-bopping continues as inanimate objects begin moving around the room on their own, seemingly possessed. Candy saunters over to a window, still aloof to the paranormal activity, and opens the shade to reveal an older woman in a library where the possessed books are flying around. This lady may or may not be Helen Seinfeld. 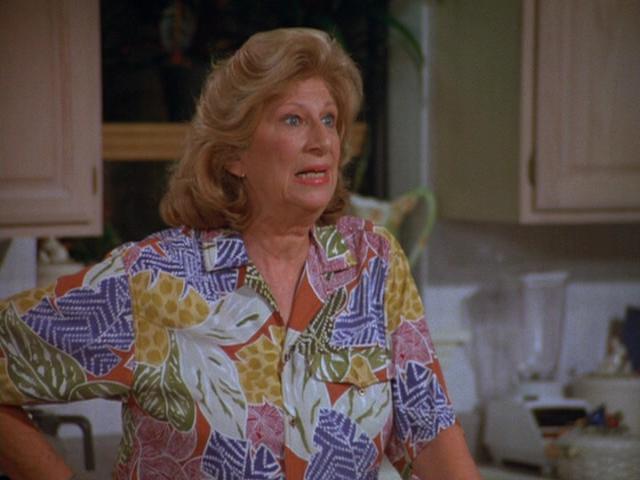 When we return to the Rub ‘n’ Tug, Parker has kicked things up a notch and is now singing into a neon microphone, and you can tell he is feeling it as all sorts of crazy spirits flash behind him. He may actually be in a country club banquet hall now. I think my cousin got married there. We are approximately one minute in and we start to have scenes from the movie spliced in to the action. Good move, add some star power. No offense, Helen. In the middle of the clipfest, Ray pops in with a swank look back over the shoulder to remind us that he ain’t afraid of no ghosts.

OK, so I was off on the massage parlor claim, it looks like this is Candy’s pad as she is sleeping peacefully in the bed. Although I guess she could live above the massage joint, as it is New York City and space is limited. I will assume she pays the owner $1,700/month to reside upstairs from his business. The creep factor pushes to a hard 8 as Parker lingers outside the billowing sheer window curtains. And finally…the moment we have all been waiting for arrives: the cameos! Throughout this treasured piece of Americana, various TV and movie stars of the time pop in to belt out “GHOSTBUSTERS” just as the orphan kids did earlier. First up, none other than Chevy Chase as entry #1. He was a big deal in 1984, so they may have blown their wad off the bat. Candy continues her slumber as an invisible man slowly pulls the sheets off her, revealing that she is wearing a sexy little number. She finally wakes up and wonders what is up as Parker slides out from under the bed to set up the next cameo: Irene Cara (FAME!), she who is going to live forever. 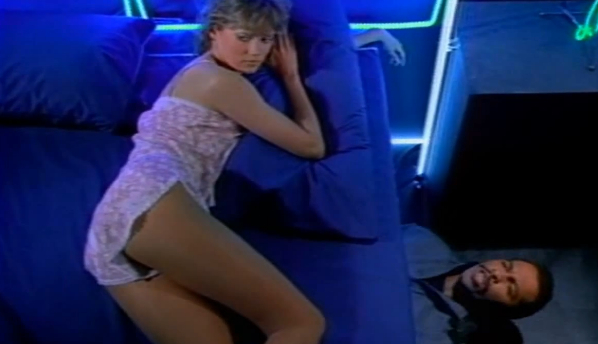 Back to the movie clips as we get a section of instrumentals, but Parker stays involved as he continues to croon the hook into the neon microphone, but now he is just floating in the air as purple lightning bolts flash in the sky behind him. Candy is finally fucking aware of what is going on and how abnormal it is as she is sprinting down a hallway filled with neon doorways. Well maybe not sprinting, more like a Prince Fielder sashay. Parker very helpfully teaches us how to dial a phone, but does so with a very smug look on his face. Look buddy, if you want to help out, help out. Don’t be a dick. 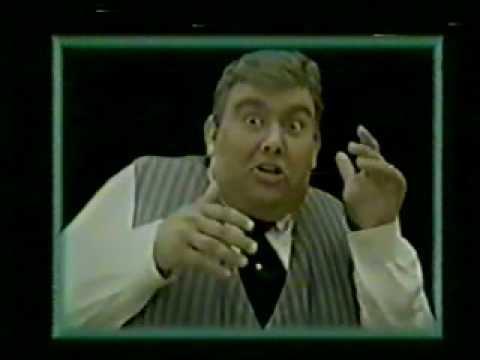 Speaking of Candy, Cameo #3 is John Candy, who hams it up a bit for us, which is nice to see. He most likely ate that ham afterwards, but that is neither here nor there. Slim Candy finds a lit up stairwell and she starts to scamper up them but Parker rises up through the landing as smoke pours out around him and he just stalks towards her before chasing her down the stairs with modified jazz hands. I thought he was supposed to be assisting her, but now it seems like he exists solely to torture poor Candy, who is still in her nightie. Ray really is a piece of work as he is calmly back at his microphone like he didn’t just attempt to assault a young woman in her pajamas. 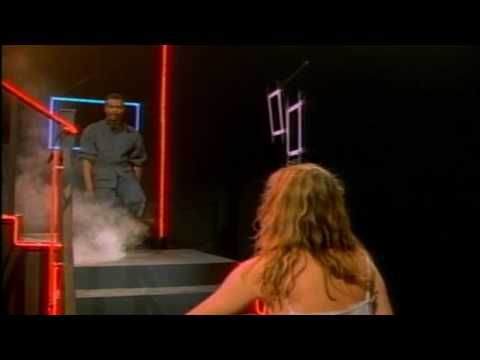 Cameo #4: Melissa Gilbert. Let’s just move on. If you have a dose of a freaky ghost? Ray is the only freaky one here. He is just two steps away from soliciting sex from his blind student. We are now below the celebrity Mendoza line as Ollie E. Brown is Cameo #5. He is a singer and a high school basketball coach, so good on him. Ray is getting funky now as he hits a high note to push this thing home. The breakdown interlude brings some more clips capped by the best line of the song, delivered with a great passion from Ray: “Bustin’ makes me feel good!” No need to tell me, Ray, I am with you on that one. 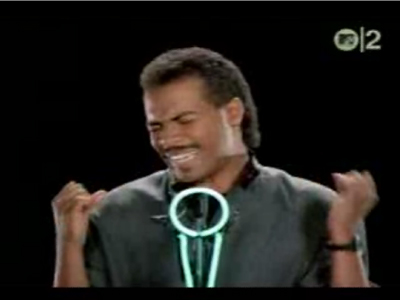 Ray isn’t afraid of ghosts…because you are one! Asshole. OK, things are taking a really bad turn here as the needle hits 9.5 Richie. Back to the apartment, Ray is backing Candy into her room, bumping up against her and warning her not to “get caught alone, no no”. Two more random people show up briefly outside the window as Ray is now being nice and explaining to Candy what to do in these situations. So was this just one big Scared Straight episode? To top this all off, Ray rips his shirt off to reveal a Ghostbusters wifebeater. Amazing. 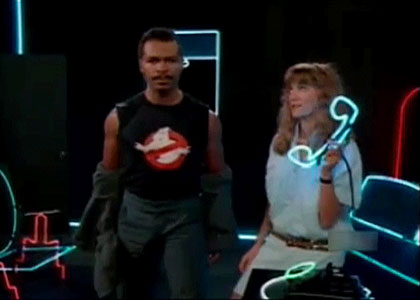 Out to the streets of New York, Ray leads the Ghostbusters in a choreographed flash mob style dance down the street. Pretty nice form all around as they stay in unison with the beat. As they are back in the New York Groove, we hit a cascading waterfall of cameos with George Bluth at #6 (or is it Oscar?), George Wendt at #7 (in case you didn’t know what year it was already), Al Franken at #8 (complete with a whole lot of sass), Danny Devito and his wild skullet mane at #9, Carly Simon at #10 (I bet you think this song is about you), Peter Falk, glasses in hand, at #11 and finally Teri Garr closes it out to cap us at 12 cameos.

In between all that, Candy and Ray seem to be an item now, as they walk off together, Candy decked out in a Ghostbusters jean shirt. The dancing has also fallen off a bit as Bill Murray has gone rogue. He is clearly getting the most shine in this video, natch. He even does some assisted breakdancing, as the rest of the crew spins him around while he is laying prone on the pavement. Chevy pops up one last time and eats a cigarette before the Ghostbusters logo shows up on a large video screen to take us home. Well, this certainly was something. It definitely had all the hallmarks of a memorable 80s video, mixing in iconic movie clips, creepy stalkers, wacky graphics, intense dancing, a sweaty premise and celebrities! If this video doesn’t get you jacked up for Halloween, you have no soul. Also, the creep factor peaked at a crazy 9.5 Lionel Richie “Hello”, so nice work there Ray Ray!

So, that is a wrap for JR’s Treasure Trove. Please come back again and join me as I continue digging through my closets full of nostalgia, exclusively here on Place to Be Nation! Bustin’ does indeed feel damn good! 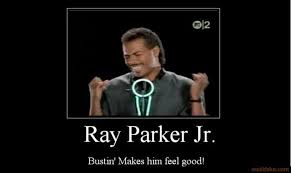