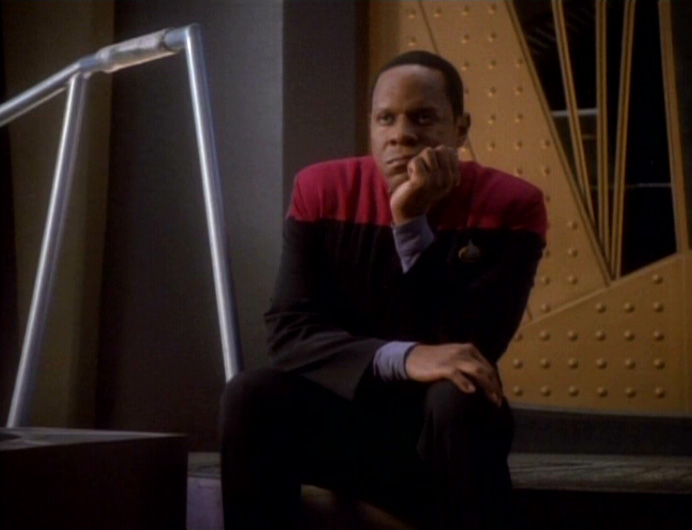 There are many ways the basic premise of Deep Space Nine could have developed. Various episodes have shown contrasting approaches to basic elements of the series, to the use of prominent guest stars, and to forming and developing the main characters. The characters have been developed directly through explicit dialogue, indirectly through their actions in typical current-day plots, and by contradiction through plot devices that force them out of their normal roles. “Dramatis Personae” is another entry in the last category, using an old Star Trek standby, telepathic possession, to define the series’ main characters by forcing them out of character.

Common wisdom states that this type of episode isn’t something a television production would typically do in its first season. The characters must be better developed and the audience must spend more time with them before their twists can be fully appreciated, according to the producers quoted in various reference guides. There is some cause for doubt here, however, given that Deep Space Nine is following a pattern set by the two previous live-action Star Trek series of featuring out-of-character turns by its main cast in their first seasons. Both “The Naked Time” and “The Naked Now” built its characters indirectly by showcasing thoughts and actions they deny themselves under normal circumstances, including romantic subplots that are still widely discussed in fandom (Chapel/Spock, Crusher/Picard, Yar/Data), in the process giving the actors an opportunity to broaden their range.

“Dramatis Personae” functions in those same ways, with an important twist. Deep Space Nine has the advantage of a unifying central premise — the Federation’s presence on the station to assist the Bajoran people — with each character having a particular viewpoint on that premise, which informs the starting points for the relationships between them. The mechanism for the shift out of character in “Dramatis Personae,” a telepathic record of an ancient species’ descent into conspiratorial recriminations, does not destroy this underlying dynamic in favor of its new matrix, but instead emulates the emotional core of the Saltah’na’s downfall in this new context. Where Major Kira and other Bajorans were previously leery of the Federation’s presence on DS9 and in Bajoran space, they now feel they must actively sabotage it; where Commander Sisko was hesitant about accepting his role on the station, he now switches between bored detachment and megalomaniacal ranting about how he will hold onto his position of authority by any means necessary. He comes to embody the worst-case scenario from the Bajorans’ perspective: the arrogant Starfleet officer who barges in to impose his brand of order. That the conflict erupts over a disagreement regarding a vessel that might be shipping weapons for the Cardassians only ties what could have been a paint-by-numbers episode closer to the background of the series.

Unlike the original series and Next Generation examples, “Dramatis Personae” does not merely loose its characters’ inhibitions, suggesting that this sort of behavior is an aspect of their characters that they actively keep hidden. (And, thankfully, it does not simply resurrect the exact same MacGuffin.) In a subtle but brilliant shift, “Dramatis Personae” presents the characters of Deep Space Nine, in the premise of Deep Space Nine, as if they were not Star Trek protagonists. The amount of interpersonal conflict among the lead characters on DS9 has been a distinct shift from the expected dynamic of a Trek series in Gene Roddenberry’s idealized 24th century, and yet the Starfleet and Bajoran Militia characters all recognize that they are ultimately working toward the same goal, and their differences of opinion amount, largely, to just that. “Dramatis Personae” temporarily takes away this amiability imposed by the format of Trek and the format of series television, replacing it with a cynical edge.

This sense of cynicism, convinced of the impossibility of Deep Space Nine‘s goal — the depiction of people with disparate backgrounds and positionalities forging peaceful bonds — is one thing that DS9 could have developed as a core value, and indeed some have accused it of doing so. It’s also an element that was sorely lacking in Star Trek‘s next progeny, Voyager. Established with another Starfleet crew integrating with another crew that brings its own goals and positionality, Voyager proceeded to iron out that conflict without ever exploring it sufficiently, briefly referring to it a handful of times before dismissing it entirely in favor of other metastories. Deep Space Nine must eventually resolve the story of the Bajoran-Federation relationship, but it does so in an altogether more interesting way before shifting to another paradigm. Neither show embraces the unadulterated cynicism that the Saltah’na story presumes — though DS9 has often been accused of abandoning the idealism of Trek, that truly would be such a betrayal, and this could be considered a case study for one reason why the makers of Voyager decided on a different direction for that series — but there are elements of long-term conflict that have come to be associated with more “mature” programming at work here.

There is also a sense of the long arm of history at work. Star Trek is no stranger to artifacts from ancient civilizations causing drama & danger in the nominal present, but the ease with which a little paranoia tilts the show’s premise into outright violent conflict emphasizes how sensitive the situation is, and how sensitive the characters must be to maintain it. (It’s also not irrelevant that the Saltah’na threat is yet another one that comes from the Gamma Quadrant. The wormhole, nominally the show’s gateway to exploration, has now repeatedly harbored threats, while off-screen Klingon ships explore the Gamma Quadrant instead of the show’s subjects.)

Of course, one of the main draws for an episode of this type is the opportunities it offers for the show’s actors. Avery Brooks benefits the most from this, but almost all members of the main cast get to stretch outside their typical bounds: as “Emissary” is the only episode to have focused on him thus far, Sisko has been featured more as a father and an administrator than anything else; while this fits the sense that Sisko is at heart a builder of communities, it offers a narrow range of expression for Brooks. When Sisko is affected by the Saltah’na, however, he seems to descend into madness, tinkering with a clock — another of Sisko’s totemic objects, an excellent design by Ricardo Delgado that stayed in Sisko’s office for the duration of the series — while expressing explicit apathy for his duties until his power is threatened, at which point he flies into a rage. It’s possible that Sisko has been held back from expressing more anger to avoid being perceived as an “angry black man” or to distance him from his role on Spenser: For Hire, but after this episode shows how effectively Avery Brooks can integrate his full range into his character, the range he’s asked to convey proceeds to grow. 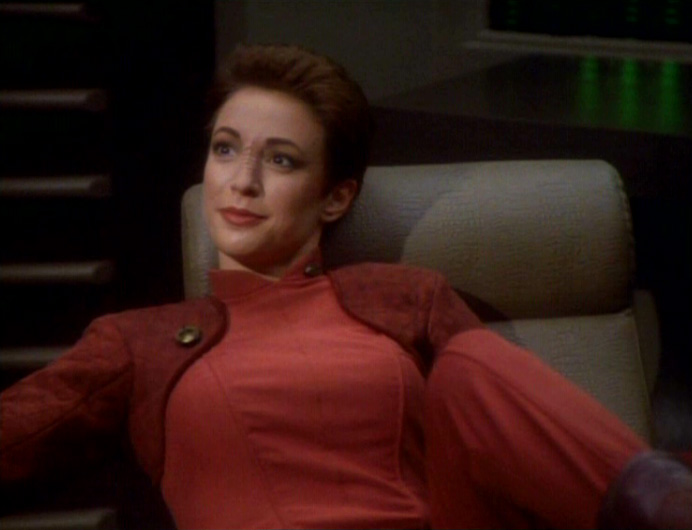 While Nana Visitor has had more Kira-focused episodes to display her acting range, “Dramatis Personae” offers a chance to explore a very different side of her character: when she tries to bring Dax and Odo into the inner circle that will help her gain control of the station, she exudes a sexual energy (most explicitly with Dax, but it does come out in the way she carries herself with Odo and the tone of her voice as she promises to allow Odo to police the station as he sees fit); this ability to use seduction to amass power wouldn’t be integrated into Kira’s character, but in another year the show would find a way to allow Nana Visitor to indulge in it regularly. The other cast members don’t get equally meaty screentime, but their changes are also profound: Colm Meaney turns the working-class O’Brien into Sisko’s consigliere; Terry Farrell plays Dax as an easily-distracted airhead, constantly playing word-association with her centuries of memories; Siddig El Fadil, playing Bashir under mind control for the second time this season, is given more toned-down material this time as Bashir asks vague questions about the growing conspiracy while remaining on its margins. Odo and Quark, as in “Babel,” are left as the only protagonists unaffected, and Odo once again shows off his new talents at pretense long enough to save everyone.

All of the actors portraying the effects of this telepathic contagion indulge in a glorious level of camp, so much so that it becomes hard to believe that this is a simple historical record — surely it must be some sort of dramatization, perhaps a Saltah’na equivalent to our historical plays and films. But, of course, history is alive: the mechanisms of portraying history differ from those of fictional literature only in their referent. History can be told in ways that are as dry, or vibrant, or campy, or ironic as any other type of literature.

The Saltah’na are dead, killed by internal division and suspicion of others. The Bajorans face some of the same issues, as do we all, and they will be all the more relevant to Deep Space Nine very soon. 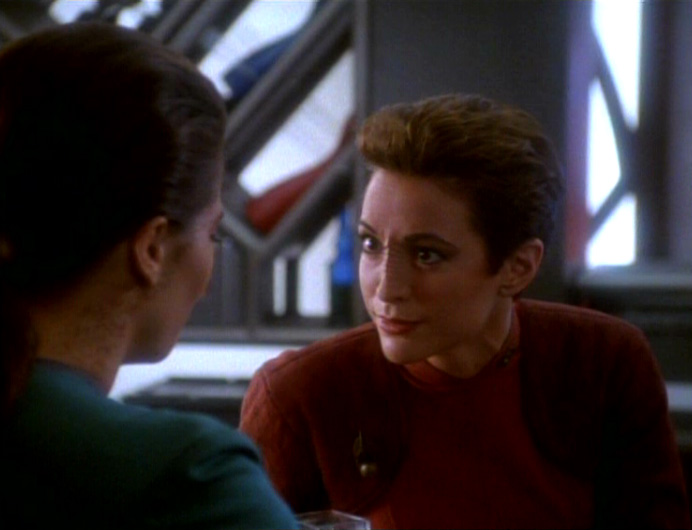