Skip to content
The Best of PTBN Wrestling
Glenn Butler

Hulk Hogan isn’t just a titanic figure in the history of wrestling, he’s the titanic figure, the engine behind two consecutive boom periods, the linchpin on which countless careers and lives have depended in the last thirty-plus years. While Hogan was treated well for a time, it’s tempting to think of a universe with an alternate history, a better history, in which Hogan’s booking reflected his talent as a performer, as a wrestler, and as a showman, one where he never left his home and was allowed to properly carry the banner of the WWF. And truly, WrestleMania is The Showcase of the Immortal Hulk Hogan.

WrestleMania
WWF Champion Hulk Hogan (w/Mr. T & Jimmy Snuka) retains against Roddy Piper (w/Paul Orndorff & Bob Orton). We can smooth out some of the rockier parts of history, recognizing WrestleMania as the pay-per-view pinnacle it would become rather than a cross-marketed house show. The War to Settle the Score, well, doesn’t settle the score, as wars often don’t, leading Hogan to call on his best buddies to support him.

WrestleMania II
WWF Champion Hulk Hogan retains against King Kong Bundy, the latest monster heel to challenge him. But what of his ribs??

WrestleMania IV
WWF Champion Hulk Hogan retains against Ted DiBiase. The Million Dollar Man has been hounding the Hulkster for months, trying to buy the WWF Title. He got his spot at WrestleMania through a combination of throttling opponents on Saturday Night’s Main Event and buying off referees; he implies that he bought off Jack Tunney, but nobody believes him. DiBiase looks to have Hogan’s number thanks to the interference of his new ally André, but Randy Savage runs out to distract the Giant and hits a well-timed chair shot to allow Hogan to hit the dreaded leg drop.

WrestleMania V
The Mega-Powers reigned supreme over the WWF after WrestleMania IV, but eventually Randy Savage’s jealousy of the Hulkster’s five-year title reign got the better of him. Now, back where it all began in Atlantic City, the Mega-Powers…EXPLODE! Ultimately, Hogan is proven to be the better man when he defeats his former best friend. 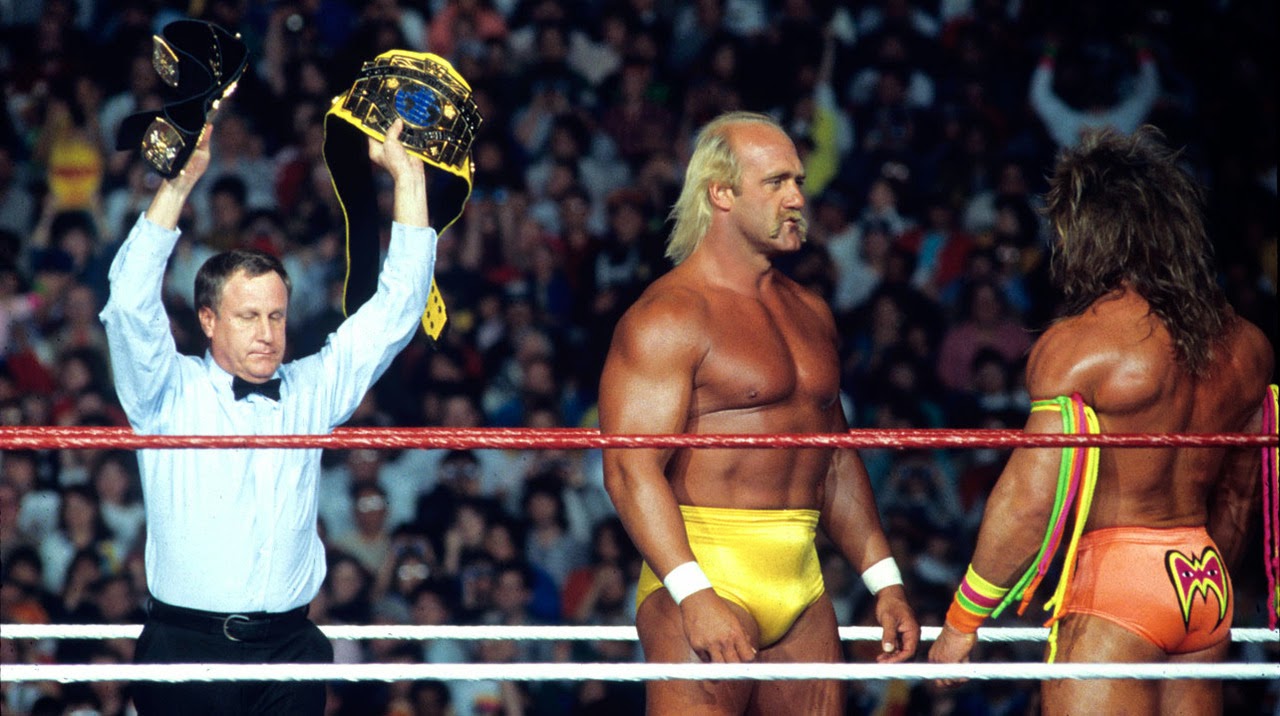 WrestleMania IX
WWF Champion Hulk Hogan retains against Mr. Perfect. This was the first year that the Royal Rumble winner was guaranteed a championship match at WrestleMania, and Mr. Perfect deviously avoided twenty-nine other men to claim the honor. Color commentator Bobby Heenan, also Mr. Perfect’s manager, is beside himself with glee at the Royal Rumble and beside himself with grief after yet another one of his charges fails to take down the Hulkster. 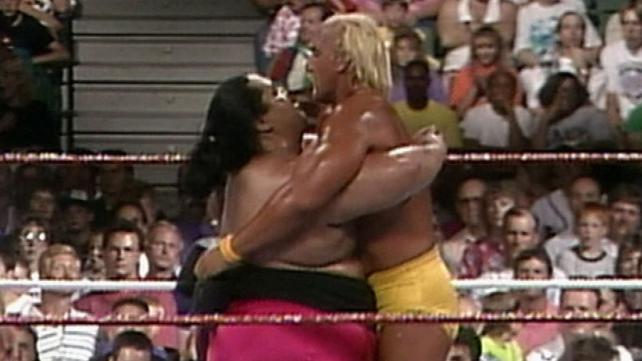 WrestleMania X
In July 1993, the mighty Yokozuna went to the USS Intrepid to issue a body slam challenge to the superstars of the WWF. Macho Man Randy Savage couldn’t slam him. Crush couldn’t slam him. The Narcissist Lex Luger couldn’t slam him. The sun started to set, and it looked like Yokozuna would carry the day, until…what’s that in the air? It’s — a red and yellow helicopter! On the Fourth of July, while Mr. Fuji recoiled in fear, the Real American Hulk Hogan picked up Yokozuna, walked over to the side of the aircraft carrier and slammed him directly into the Hudson River. USA! USA! In the intervening months, Fuji and Yoko have hounded Hogan looking for revenge, until the champ finally shuts them both up at WrestleMania. After the match, the entire babyface locker room arrives at ringside to congratulate Hulk Hogan for winning the match and to celebrate a WrestleMania ten years in the making.

WrestleMania XI
WWF Champion Hulk Hogan, having recently passed the total combined reigns of Bruno Sammartino to become the longest-reigning champion in company history, retains against Diesel, the latest huge monster to challenge him. The two had been tag-team partners and best friends, but several of their opponents slipped out of Diesel’s grasp just before a big boot arrived from Hogan. Diesel refused to accept the idea that the incidents were innocent mistakes, eventually snapping and powerbombing the Hulkster. This attack bruised several of Hulk’s ribs, which are heavily taped for the match. After the WrestleMania bout, Hogan leaves with Pamela Anderson and Nicholas Turturro.

WrestleMania XII
WWF Champion Hulk Hogan retains against Shawn Michaels in a sixty-minute Iron Man match. While Michaels is in the ring waiting for Hogan to make his entrance, the champ suddenly flies down a zipline from the top of the arena, cupping a hand to his ear as he glides to the ring, prompting commentator Vince McMahon to shout “there is only one REALAMERICANHULKHOGAN, YEAH!” 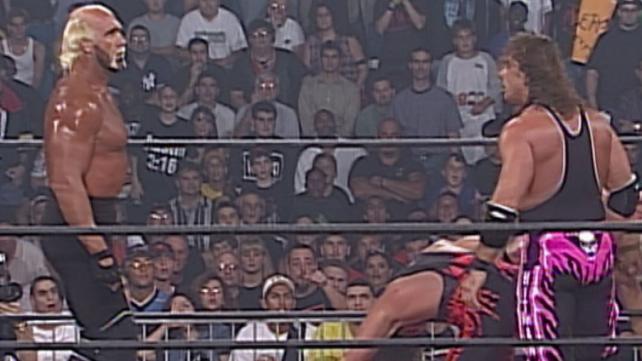 WrestleMania XIII
WWF Champion Hulk Hogan retains against Bret Hart. After beating Psycho Sid in a steel cage match to keep the number-one-contendership he won at the Royal Rumble, The Hitman went off on a profanity-laced tirade about how he’s been “screwed” out of title opportunities, earning him a new reputation as a whiner. And if there’s one thing Hulk doesn’t like, it’s a whiner. Hart appears to have Hogan locked up in his lethal Sharpshooter, used to put away so many opponents on his way to WrestleMania, until Hogan powers out and hulks up for the victory. Now we truly know who is the best there is, the best there was, and the best there ever will be.

WrestleMania XV
WWF Champion Hulk Hogan retains against The Rock, who has been declaring himself The People’s Champion during the buildup to the match. Even Gennifer Flowers agrees that we settled that one.

WrestleMania XVI
A McMahon in every corner…and Hulk Hogan in the middle! After more than fifteen years of dominance, taking the WWF from a northeastern regional promotion to a national company to a publicly-traded billion-dollar international powerhouse, Hulk Hogan suffered his biggest betrayal yet when his business partner and best friend, Vince McMahon, turned on him and started trying to seize control of the championship. Here, the champion takes on almost insurmountable odds, body slamming The Big Show onto The Rock and pinning them both simultaneously, while Triple H eliminates Mick Foley in the first Hogan-free pinfall in WrestleMania main event history. Hogan and HHH then face off, Vince McMahon’s last hopes resting on his son-in-law, but Hogan prevails against the corporate onslaught…for now. 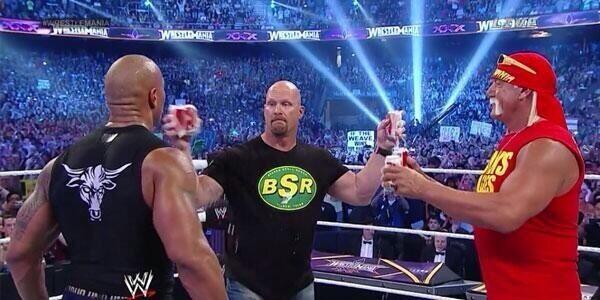 WrestleMania XVII
In a triple-threat featuring the three biggest stars of the Attitude Era, WWF Champion Hulk Hogan faces both The Rock AND Stone Cold Steve Austin. Toward the end of the match, with Rock knocked unconscious outside the ring, Austin makes a deal with the Devil himself, accepting Mr. McMahon’s help in incapacitating Hogan. He hits him with Stunner after Stunner, but the man just won’t go down for the three-count. He delivers seven hundred chair shots…but on chair shot seven-hundred-and-one, Hogan hulks up, punches Austin, and big boots him over the top rope directly onto Mr. McMahon. While Hogan is pointing at Austin and McMahon, sprawled on the ground, The Rock comes from behind with another chair shot to Hulk’s back, to be met with only the YOU!! fingerpoint and the full finishing routine. “OH MAH GAWD,” comments Jim Ross.

WrestleMania XVIII
Mr. McMahon has been growing desperate. No matter whom he throws at his champion, the Hulkster always finds a way to come out on top. McMahon finally turns to the one place nobody thought he’d ever go — and WCW invades. Ultimately, WWF Champion Hulk Hogan defeats WCW Champion Chris Jericho to become the first ever Undisputed World Heavyweight Champion. 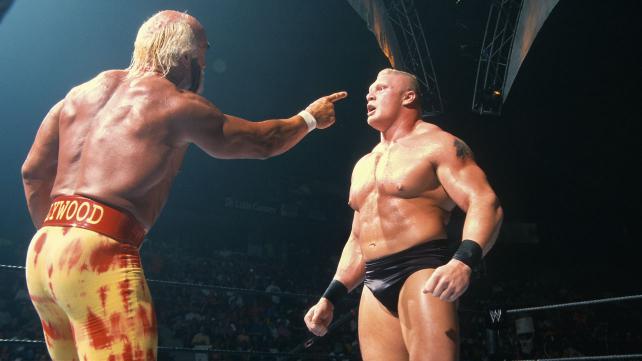 WrestleMania XIX
WWFE Champion Hulk Hogan retains against Brock Lesnar, the latest huge monster to challenge him, whose services Paul Heyman is renting to Mr. McMahon as The Next Big Thing. Not so much, as it turns out. McMahon tries to interfere on Brock’s behalf while the referee is incapacitated, but ends up being bloodied for his trouble.

WrestleMania XX
WrestleMania XX, where Hulk Hogan’s title reign begins again! This time he faces Chris Benoit and Kurt Angle in a triple-threat match that starts with long technical sequences, but turns bloody and brutal. The champ counters the anklelock and crossface simultaneously. This match will later be erased from history.

WrestleMania XXI
WWE Champion Hulk Hogan retains against Batista, the latest in a long line of huge monsters to challenge him. 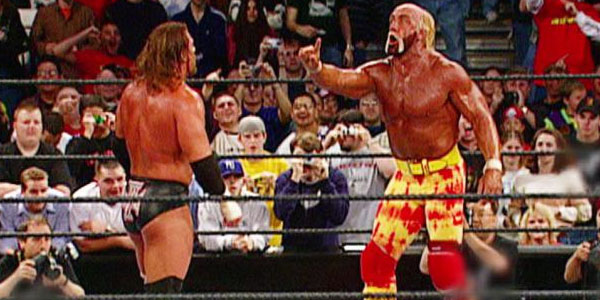 WrestleMania XXII
WWE Champion Hulk Hogan retains against Triple H, who builds up the match with a string of tedious promos about how old Hogan is and what HHH perceives as his lack of technical wrestling expertise.

WrestleMania XXIII
WWE Champion Hulk Hogan retains against The Undertaker in his gravest challenge yet. Sorry, there’s only one streak allowed here. 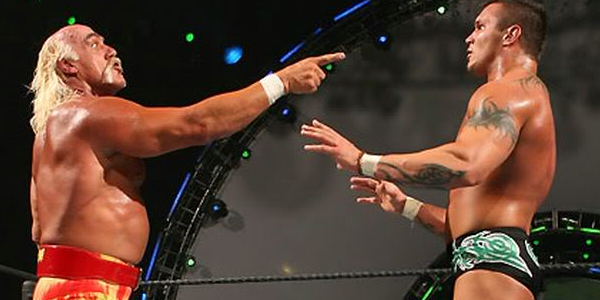 WrestleMania XXIV
WWE Champion Hulk Hogan retains against Randy Orton after kicking out of the head-punt. The voices in Randy’s head are a chorus of Randy Savage, Bret Hart, Shawn Michaels, Steve Austin, and Kurt Angle all saying “I feel your pain, dude.” It’s not that easy, though, as there were actually two Royal Rumble winners! Randy Orton and Edge tumbled out of the ring simultaneously, and because no referee could determine a clear winner and a match at No Way Out proved similarly inconclusive, Teddy Long has declared that both men are due a shot at the champ. It’s a Double Main Event! Of course it’s The Ultimate Opportunist, Hogan’s former tag-team partner and best friend, who draws a weakened Hogan fighting in his second match of the night. The Edgeheads take out the assigned referee and wreak havoc, but after Charles Robinson runs his marathon down the ramp in Orlando, Hogan finally prevails.

WrestleMania XXV
WrestleMania XXV isn’t the 25th anniversary of WrestleMania, but it is just after the 25th anniversary of Hulk Hogan’s first championship victory. Hogan has been champion for just more than a quarter of a century, longer than a large portion of WWE fandom has been alive. On the night before WrestleMania he becomes the first member of the active roster, let alone reigning and defending WWE Champion, to be inducted into the Hall of Fame. He gives a heartfelt hour-long speech on the eve of his match with John Cena. Late in the match, Cena has hit Hogan with several FUs, and Hogan keeps struggling back to his feet to give Cena the YOU!! point, but he’s growing weaker every time. He’s realizing what Cena is realizing, what the crowd is realizing. His time has come; there will be no big boot and leg drop this day, as the champ just can’t keep up with his much younger opponent any more. Hogan is crying. Cena’s crying. Most of the ninety-five thousand, three hundred and twenty-one fans in attendance, a new indoor attendance record, are crying. Cena hoists the Hulkster up on his shoulders, looks to his left, and mouths “I’m sorry; I love you” before delivering one final FU to retire his best friend Hulk Hogan and become the eleventh WWE Champion, in the first title change since The Iron Sheik dropped the belt all those years ago. The next night on Raw, Hulk is joined by all of his old partners, greatest rivals and best friends in an emotional celebration of his contributions to the business during his thirty-year career.

Hogan is named General Manager later in the spring. 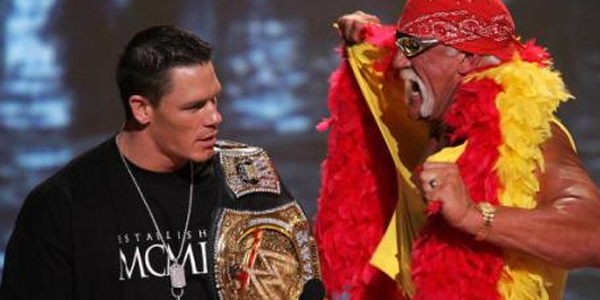