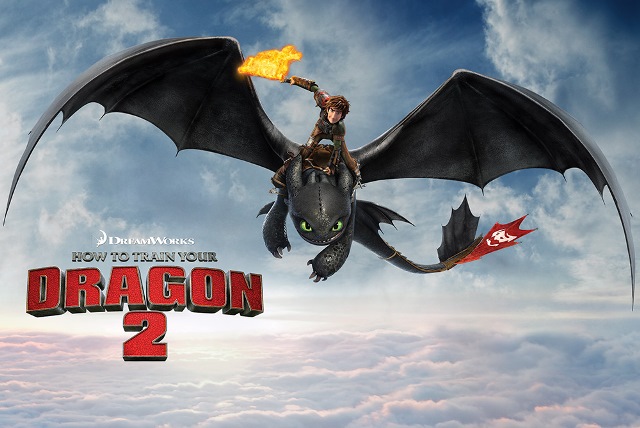 The Empire Strikes Back, Aliens, The Dark Knight, Captain America: The Winter Soldier…what do all these have in common? They’re sequels that easily surpassed their originals in pretty much every way imaginable. You can now add How To Train Your Dragon 2 (HTTYD 2) to this list.

After the first film was a massive breakout hit for Dreamworks Studios, and probably the best thing to happen to the studio since the original Shrek, and the TV series became quite popular, it was only a matter of time before a sequel dropped. However, unlike the clearly-out-for-a-cynical-cash-grab effort of certain other Dreamworks sequels (ahem, Shrek 2-whatever, ahem), HTTYD 2 ups the ante in terms of story, characterization and animation. Seriously, this might be the prettiest computer animated film yet, and is certainly better than anything Dreamworks has ever turned out.

The story picks up five years after the original and finds Hiccup, voiced again by Jay Baruchel, and the small Viking island village of Berk in better shape than it’s ever been. People and dragons living side by side and working together for the common good. And, of course, dragon races which are some of the most fun moments of the film. Stoick, voiced by Gerard Butler again, is ready to step down as village chief and pass the torch onto his son Hiccup. However, Hiccup is not feeling the whole responsibility thing and would rather keep exploring the vastness of the world and documenting what he finds along with his pet Night Fury, Toothless (most adorable and heroic modern animated creature there is). Hiccup’s hang-ups come from a place of uncertainty about who he is and his place in the world. Despite the love and confidence of Astrid, voiced by America Ferrera, and his abilities as an accomplished amputee dragon rider, he just can’t accept the position.

Then the past comes back with a vengeance as Drago, voiced menacingly by Djimon Hounsou, launches a campaign to capture and control all dragons on the planet and use them to expand his growing empire. His power over the dragons rivals that of Hiccup’s and his expansive army of both men and dragons makes him a truly terrifying conceptual villain. When his history with Stoick is revealed, the story gets even deeper and becomes something so much more than the typical kids-movie fare. Of course, that’s not the only history that comes back in this one. The moment Hiccup and Stoick find out Hiccup’s mother Valka, voiced beautifully by Cate Blanchett, is still alive after all these years believing her dead is one of the most emotionally resonant moments in modern movie history.

Most of the other characters in the film fill their roles as you’d expect and only really serve as comic relief or to casually add something other than the main plot to the story, except for new addition Eret, voiced by Game of Thrones star Kit Harrington. In Eret, this series has just found its Han Solo. He’s brash, witty, funny and an absolute scoundrel. In other words, he’s the side character you’ll remember most after the movie is over. Aside from Toothless, of course, whose own character development goes above and beyond what it actually had to be for a character with no speaking part.

The film does have some downside, though. As much build up to the character Drago that was given, his villainous moments seem a bit of a letdown. He postures very well and has a very scary presence, but when it comes to actual battles, he seems ill-equipped to actually fight. He does get in a quite a few good shots and it’s his power over dragons that gives him an edge, but sometimes he doesn’t come off quite as threatening as a villain of his stature should. We also only get a little bit of history on him and his motivations, which for a younger audience may not be clear if they don’t hang on his every word. And while Eret is a great character and fun addition to the story, his back story does get sacrificed a bit in order to add more levity to the proceedings in the form of Ruffnut, voiced again by Kristen Wiig, becoming obsessed with him. It does make for some funny jokes, though. It’s possible the adults in the theater were laughing louder than the kids.

Summer time is usually overcrowded with superheroes and sequels, but this is one sequel that manages to get all the important stuff right. It could very well be the most fun you’ll have at the movies this summer, possibly this year. It does get a bit darker and edgier than its predecessor, but it never goes over the top or pushes the boundaries too far for a kids movie. Luckily, it also manages to be highly enjoyable for adults, too. This is one for the whole family, literally.