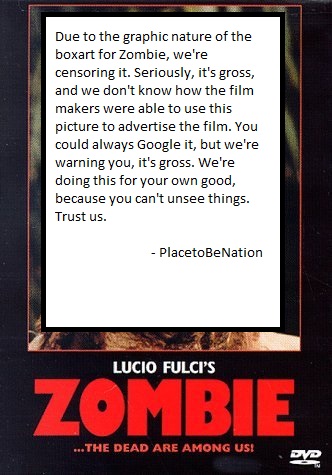 Plot: A young woman seeking her lost father heads to a Caribbean island aided by a journalist and two locals, where they meet an English doctor, trying desperately to cure a plague which brings the dead back to life.

Review: They’re going to eat you…..

This week’s review is of the infamous film Zombie, which if you’ve seen before you’re well aware of why it’s so infamous to horror fans. Those that have not seen it on the other hand are in for a gory, and gross treat.

Let’s clear up the title to the film. The original title is Zombi 2, because everywhere besides North America this was marketed as a sequel to Zombi, which was the Italian title for George Romero’s Dawn of the Dead. Although the movies have zero connection story-wise, the producers choose to market it as a sequel to capitalize on Dawn of the Dead’s success. Here in the US, they called it Zombie, just to make everything even more confusing.

The story is a fairly simple one. Anne is looking for her missing father, who’s boat shows up in New York with a flesh-eating ghoul onboard. Anne and a reporter named Peter West set off to the island of Matool (substituting for Saint Thomas, in the Virgin Islands), along with a couple to find her father whose note claims the dead have come back to life. Once on the island they find out that a Voodoo spell is raising dead Spanish Conquistadors along with others who have died on the islands. The group fend off the zombies as long as they can before escaping the island and heading back to New York.

One thing you’ll have to get used to right away is the dubbing of the film. Unfortunately half of the cast in Zombie didn’t speak English, and since the film wasn’t exactly a high budget affair, the lip sync took quite a hit. While I don’t have a problem watching movies with this issue, I know this will throw many people off.

I like the idea that the zombies are showing up thanks to voodoo, rather than not explaining it at all (which was the style at the time). I also like that the setting is a small island, as it means the situation is contained and our heroes might have a fighting chance of surviving.

One of the most ridiculous scenes you’ll ever see on film is the Zombie Vs. Shark sequence. Yes, you read that line right, it’s a shark, fighting a zombie. There’s no explanation as to why a zombie is underwater to fight a shark and it’s probably for the best. It’s as cheesy as it sounds trust me, and one of those things you need to see to believe.

Lucio Fulci did a great job as director when it comes to the setting. The island should be of the lush tropical variety, but instead it’s dark and grim helping the story immensely.  The soundtrack is eerie and moody, putting you right in the thick of the zombie invasion.

The pacing has some problems however, as the film can almost drag when the zombies aren’t attacking, and that’s a shame because those moments should be used to push the characters forward story wise. Instead, characters are just lead from spot to spot, waiting to kill more zombies. The plus side to this is when the zombies do attack, there’s plenty of action and gore to keep you going.

The ending is a bit flat, and you’ll know what I mean when you watch it. While it does set up for a sequel, and yes there is a Zombi 3 (or Zombie 2? I’m confused), nothing comes of it. The next film in the franchise is unrelated to this one, imagine that.

Zombie is one of those rare movies that managed to be gory beyond what you could imagine at such an early stage for horror movies. Sure Dawn of the Dead had it’s fair amount of gore, and the teenage slashers were ready to turn the head up on the genre, but Zombie to me has the most horrific kind of gore you can imagine. Watching the film today, if you can get past the lip sync issues and the pacing, you’ll find a stomach turning film that due to its low budget almost feels like we’re watching a home movie the entire time.

Acting: I like Tisa farror as Anne Bowles. She’s our lead and does an alright job with the material. She’s cute but unfortunately not very strong like other female leads in horror films.

Ian McCulloch is great as Peter West, gung-ho and ready to kick some zombie ass.

I like Richard Johnson as Dr. Menard, he gives a fine performance here but really doesn’t have much to work with.

Gore Factor: The gore here is downright disgusting. The look of some of the zombies is pretty gory, the zombie on the boxart in particular has maggots coming out of his eye….ewwww! Also here is on the most, no it’s THE most horrific eye gouge sequence you’ll ever see. The fact that they don’t cut away during it makes it even worse. There’s more but I’m ready to lose my lunch typing this out.

Nudity Factor: There’s plenty of boob here, along with full frontal for the guys watching. Those Italian film makers love two things, gore and nudity. Plenty of both to see here!

Overall: Zombie (or Zombi) is one of those horror movies you only hear about through message boards from gorehounds who sing its praises. I can overlook the terrible lip synching, but the choppy direction leaves a lot to be desires. There’s some downright disgusting gory effects here, which help the film stand out against its paper thin plot. Still, this is a film for Zombie fans to see and those with a strong stomach. Now if you’ll excuse me I’m going to cherish having both of my eyes intact.