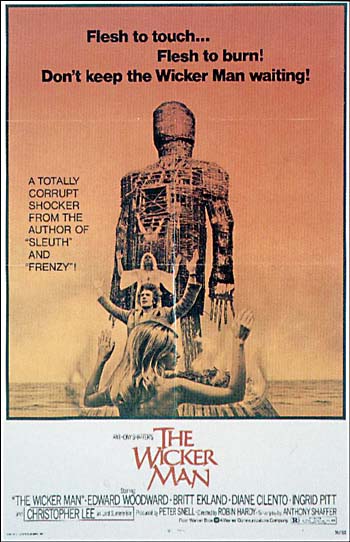 Plot: A police sergeant is sent to a Scottish island village in search of a missing girl whom the townsfolk claim never existed. Stranger still are the rites that take place there.

Review: It is time to keep your appointment with the Wicker Man.

Sergeant Neil Howie is sent to the remote Hebridean island known as Summerisle to investigate the disappearance of a young girl named Rowan Morrison after getting a letter requesting him to do so. Howie is a devout Christian, going so far as to not even carry a gun on him during his investigation.

After arriving at the island he finds that the islanders pay homage to the pagan Celtic gods of their ancestors. They practice open copulation in the fields, include children as part of the May Day celebrations, teach children of the phallic association of the maypole, and place frogs in mouths to cure sore throats. The Islanders, including Rowan’s mother, thwart his investigation by claiming that Rowan never existed.

As Sergeant Howie continues his investigation, he meets the island leader, Lord Summerisle, grandson of the island’s crop-growing champion. After looking over photographs of previous years harvest, he finds the island barely had enough food to survive the year. He also find that when there’s a poor harvest, the islanders will make a sacrifice to ensure that the next will be bountiful. With Rowan still missing, and her grave empty, Howie assumes that Rowan is alive and set to be sacrificed for the next harvest, during the May Day celebration.

Howie uses a disguise during the May Day celebration and sneaks among the islanders during the festival, eventually finding Rowan alive and well. He takes Rowan and tries to flee the island, only for the little girl to lead Howie back to the islanders and into a trap. Lord Summerisle then reveals the real sacrifice to be Sergeant Howie.

Sergeant Howie fits the criteria: he came of his own free will, has “the power of a king – representing the law,” is a virgin, and is a fool. Despite his protests that killing him will not bring back their crops, the islanders break Howie’s legs and put him inside a large Wicker Man statue, which also has other sacrifices including animals in it. They then light the statue on fire, and sing a folk song as the statue burns and Howie is sacrificed.

This is not the Wicker Man that came out in 2006 (although we’ll review that when the time is right). The whole mystery about Rowan is taking very seriously, and the film moves at a good pace throughout. We get to follow Sergeant Howie and work with him to figure out what’s going on. To me, that’s what makes this film so interesting and engaging. I like that they kept the idea of Howie being the sacrifice until the end, as it’s really a gut punch when the islanders take him and burn him alive.

The setting, the mood, it all works for the tone of the film. It’s all played seriously, and you also have to remember this was the 70’s, back before modern technology would have influenced the film. We don’t have phones, GPS’s, and other technology to help Sergeant Howie, and that helps the film a lot. The supporting characters all help give the island a creepy feeling. You knew something ominous was going on from the start, and it all builds to a great ending.

The only downside to the film is that if you’re a gore-hound, or need jump-scares to be entertained, you won’t find either here. Newer horror movie fans will wonder what the fuss was about and even get bored watching this one. Personally, I enjoyed the pace the film moved at. The setting pulled me in, the characters kept me engaged, and I was left with an empty feeling in my stomach when it was done. I put this on the same level as Texas Chainsaw Massacre in its way of scaring you through your own imagination.

Acting: I enjoyed Edward Woodward as Sergeant Howie. I think he did a great job keeping the film going and he was believable when he threw down his logic against Lord Summerisle.

The great Christopher Lee was freaking awesome as Lord Summerisle. Christopher Lee is much more than Dracula, and playing Summerisle gave him some new material to chew on. He steals every scene he’s in and Woodword had to play it hard to keep up with him.

Nudity Factor: Britt Ekland went topless for a few scenes but used a body double for the rest. She was smoking hot in the 70’s!

Overall: For those horror movie fans that enjoy a more cerebral scare, not blood and guts, The Wicker Man delivers. Stick with Howie until the end, and it’s a guy punch once the credits roll. Lee does an outstanding job as the main villain and leaves you wanting more. Absolutely worth your time and worth being in your collection.