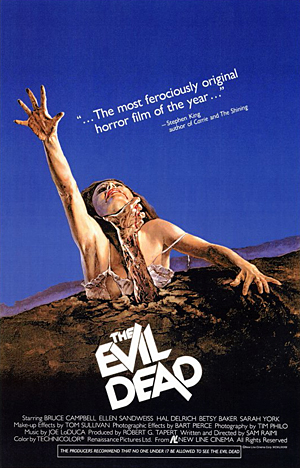 Plot: Five college students head out to an isolated cabin in Michigan for a weekend of drinking and fun. After they find an audiotape that releases a legion of demons, members of the group suffer from demonic possession, leading to increasingly gory mayhem.

Review: Ah yes, The Evil Dead, the film that launched Bruce Campbell into a long line of B movies, TV shows, and some mainstream work. While Bruce Campbell isn’t as widely known as say George Clooney, Bruce is popular amongst horror fans as a bad ass guy for his portrayal of Ashley ‘Ash’ Williams. To this day Campbell can’t escape the shadow of Ash, and I really don’t think he minds at this point.

The story is pretty simple, with these kids taking off for a weekend in a cabin and somehow opening up the demonic spirits of hell. Plenty of creeps and gore ensue, with all the red-stuff you could want to see in this kinda picture. What really helps the story is the setting, out in the woods, middle of nowhere with no help in sight. It automatically makes things creepier than they would be if this was at someone’s house or in a city somewhere.

The first time I saw the picture I was generally creeped out, with the characters being possessed by demons and the walls coming alive (it’s quite a sight to see really). Easily the best part of the film is Ash, as you can see above, he eventually starts to hold his own against the undead. The cool quotes and kicking serious ass won’t fully come out until the sequel, but his character is a blast to watch during this whole ordeal.

These days, it can be tough to watch the film due to it’s bad dialogue and wooden acting by the cast. That being said, it’s hard to hold it against the guys behind the picture, as this was a low budget affair by rookie actors and film makers, it could have been a lot worse. I’ve seen some films that will make you question if the people behind it had a clue, and this is not one of them. It’s just an early effort on the part of everyone, so it’s hard to be critical of the film.

The film did start a franchise that still goes to this day. Sure, Evil Dead 2 and Army of Darkness are more well known then the first Evil Dead, but there’s still plenty to enjoy here in spite of the films short comings. There’s also plenty of ways to see the film considering it’s been released on DVD a staggering fifteen different times, so take your pick on what special features you want.

Sam Raimi does a decent job of injecting a love story subplot into all the violence and gory that’s floating around Ash’s world. Sam Raimi would move on to directing some bigger movies in his career, with the Spiderman trilogy being his best known work.

The music is creepy and keeps you stuck in the cabin with Ash. It has an almost Gothic like feel to it, like one of those older horror movies from the thirties and forties that used music to convey the horror more then dialogue or even acting could. While there’s no catchy tune like Friday the 13th or Halloween had, the music will stick with you throughout the film.

If you’ve never seen Evil Dead, the original, not the remake, you should take a trip out to the cabin in the woods. Don’t go into the film thinking it’s one hundred percent serious business, because you’ll be let down. Just sit back and enjoy the ride. Spending the night in Ash’s world is a trip you can’t put into words; good luck making it through the night!

Acting: Bruce Campbell brings it as Ash. While the character isn’t the ass-kicking kinda guy we’d come to know in Evil Dead 2, Bruce still hams it up on screen when he needs to and drops the shit when it’s time to get serious. He may have been a rookie actor, and you could tell the rest of the cast was inexperienced, but Bruce did a great job as the lead here. Of course he’d get better as we go along.

Gore Factor: The effects aren’t top of the line by any standards, especially the climax, but there’s still some good red stuff to be seen here.  A woman gets sexually assaulted by trees (seriously), people get hacked to pieces, hands get chewed off, and more!

Overall: Evil Dead is not the perfect horror movie, but for it’s time and budget it’s not so bad. The franchise was off to a decent start here, and it’ll only get better as they move forward. I won’t say this is required watching in terms of horror films, but it’s not a bad way to spend an hour and a half.