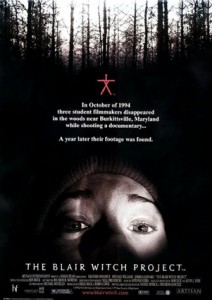 Plot: Three film students vanish after traveling into a Maryland forest to film a documentary on the local Blair Witch legend, leaving only their footage behind.

Review: The Blair Witch Project is not the first “found footage” horror film, but it did put the genre on the map in an incredible and lucrative way.

The movie takes place in 1994, with the footage being found in 1995 and then released to the public in 1999. The film centers on three people, Heather, Michael and Josh. These teenagers are amateur filmmakers who travel out into the wooden Maryland areas in search of The Blair Witch. The locals tell them of Rustin Parr, a hermit who kidnapped seven children in the 1940s and brought them to his house in the woods where he tortured and murdered them. Parr brought the children into his house’s basement in pairs, forcing the first child to face the corner and listen to their companion’s screams as he murdered the second child.

The trio make their way deep into the woods, visiting various sites like Coffin Rock, the scene of grisly murders decades ago, and an old cemetery with seven small cairns. Each night they are disturbed by strange noises and occurrences. At first it’s the sound of children playing and sticks breaking, which the three of them dismiss as people just trying to mess with them. The next night, they are attacked in their tent when it starts violently shaking, forcing the three of them to hide out in the woods until daybreak.

By the third day, the three of them realize they are lost and have been walking in circles for the last day and a half, even though they have a compass and a map. Eventually the map is lost and the three of them are constantly fighting and arguing. Heather continues to film everything since it’s her only reason to keep going. The third night they are attacked again, with Josh disappearing that night.

Michael and Heather continue trying to find a way out of the woods and Josh as well, but end up walking in circles again until that night when they hear Josh screaming for help. They follow the screams and discover a derelict abandoned house in the woods. Mike then claims he hears Josh in the basement. He runs downstairs and after what seems to be a quick struggle ,goes silent and drops the camera. Heather enters the basement screaming in fear while her camera catches a glimpse of Mike facing the corner. Heather then utters a final scream as she and her camera violently drops to the floor. The end.

It’s really easy to sit here today, in 2014, and look down at The Blair With Project. It’s a found footage film, which now has become a worn out genre that in some cases, will give you a headache and make you sick watching (Cloverfield, I’m looking at you). Also, with the internet being so readily available to everyone, today you couldn’t pull off a found footage film that is trying to pass itself off as being completely real.

I remember when the film came out, I was in a packed theater the opening night to see it. Here was a horror movie that was supposed to be 100% real. To make it even better, the footage was all handheld – real amateur kinda film making – so you knew it was totally real! The people in the film were unknowns so you didn’t see them on talk shows hyping the movie and there was no big time Hollywood red carpet premiere. To their credit, the guys behind the Blair Witch Project went the distance to sell their film and boy did it work!

There’s some good stuff with The Blair Witch Project. You have this camera Verde style shooting, which wasn’t so erratic that you would get sick and the footage does have a “real” feeling to it, without a doubt. The actors are constantly going against each other and not doing the typical “we’re in a horror movie” cliché moves. The lack of music adds to the entire experience as well, as there’s nothing to pull you out of the situation. The setting works as these three kids are pretty much trapped and you’re trapped with them. The finale sticks out in my mind and I’ll never forget the creepy ending scene.

For all the good The Blair Witch Project, there’s equally as much bad. What we’re watching here is basically three kids walking around the woods for an hour and a half. The kids continue to get lost, but as a viewer all we see is the three of them sitting and arguing about going in circles. The most interesting moments in the film are quickly forgotten about – the opening interviews, coffin rock, the grave yard – all quickly forgotten about to get back to these three fighting with each other. While I commend the filmmakers for having these three fight with each other since it does feel more real, it’s hard to watch the same arguments over and over again for the course of the film.

There are some scare tactics along the way, but nothing really interesting happens until the last two minutes of the film. We get Heather screaming at points, asking “what was that?!” but we’re never given a shot of what she’s questioning. Really, there’s so little for us to see that it’s hard to have an idea of what’s going on. Some movies want you to rely on your imagination to make it work, but in this case, we really needed to see something.

The finish of the film, as I said before, sticks out in my mind. The pacing of the film is controlled by the actors so a lot of the time it’s all chopped up and at points comes to a stand still. A great deal of the film’s strengths rely on you being a first time viewer and buying into the whole found footage idea. But once you’re past that, you’ll find a very boring film.

Acting: Heather Donahue is our lead of the film and does a pretty good job of leading us through the film. Of course, her big scene where you can see her nose and eyes while she cries and confesses on film has been spoofed and parodied, but at the time, it was pretty moving.

Josh Leonard plays the calmed down one of the group, keeping Heather and Michael from killing each other. He’s fine.

Michael Williams plays the antagonist, constantly fighting and arguing, who proves to be the most brave at the end while looking for Josh.

Gore Factor: There’s a small bit of red stuff when Heather finds a bag with teeth and what appears to be blood. That’s it.

Overall: Upon first viewing, The Blair Witch Project isn’t too bad. It’s got some creepy elements to it and the ending sticks with you. Second viewings, however, the film doesn’t hold up. We’re just watching kids lost in the woods waiting for nothing to happen. Still, the people behind the film did a great job building up the lore of The Blair Witch, with plenty of books, websites, fake news footage (which you can still find on the web today) and so much more. The problem is they claimed all of this to be real and once you find out it’s not, you lose some credibility.