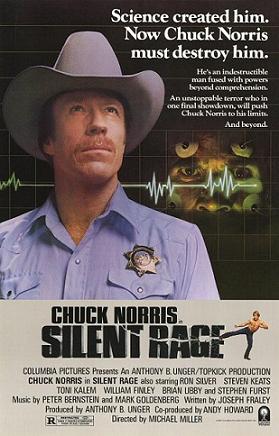 Plot: In the hospital of a small Texas town, three doctors experiment on a recently killed man named John Kirby. As a result, John becomes a mute maniacal murderer with the ability to heal automatically every time he gets injured, no matter what the injury is. When he starts killing everyone he crosses, the town’s sheriff goes after him; but how can he stop someone who can’t die, or even get hurt?

Review: What do you get when you take Halloween and put Chuck Norris into the lead role? You get a surprisingly good film.

Silent Rage is a bit of an odd movie, Wikipedia lists it as a “romantic/action/science fiction/horror” movie. That’s quite a few genres to try and cover with one film. I remember watching Silent Rage as a kid, when Chuck Norris had reached what would be his peak with the Missing in Action films and some others (Delta Force, Invasion USA). 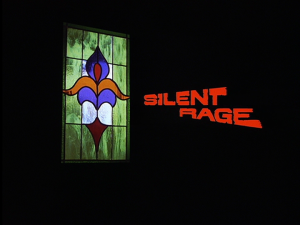 The film starts with us meeting John Kirby, a man who lives in a halfway house of sorts, as he rents a room from a mother of three. On this hot morning, John calls his doctor (Ron Silver) and tells him that he’s “losing it” and then tries to take some of his meds but fails. The screaming from the kids and their mother finally makes him snap. He takes an axe from the backyard and proceeds to kill another man living in the house along with the mother. The children, thankfully, had went off to play.

We’re then introduced to Sherriff Dan Stevens (Norris) who heads into the house shortly after everything started, thanks to a mailman who happened by and heard the screaming. Stevens enters the house and is attack by Kirby, who escapes and almost gets away. Stevens chases him down on foot, fights with him for a few moments and is able to take him into custody. After putting Kirby in the back of a squad car, he breaks the cuffs and is shot dead after kicking the police door off of its hinges.

After Kirby dies, the three doctors, who are also genetic engineers, talk about some kinda of experimental formula they’ve created, and how they need a human test subject. While Halman (Silver) objects to using the formula on Kirby due to his mental state, the other two doctors proceed with the experiment anyway. The formula works, and Kirby is back to life and indestructible. He then escapes from the hospital, killing the three doctors who operated on them and goes after Alison, Stevens’ girlfriend, who saw everything.

Sheriff Stevens ends up chasing down Kirby after finding the doctors and his own deputy dead. The chase ends up with Kirby being shot, falling from a four-story building and even being set on fire. Stevens realizes that Kirby can’t be killed, with the two eventually fist-fighting near an old abandoned well. Stevens is able to push Kirby down into the well, putting an end to his killing, but not an end to his life. 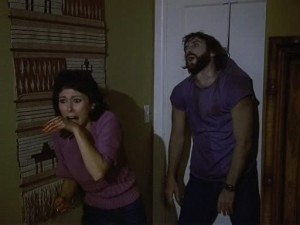 As a child of the 80’s and a huge Chuck Norris fan, I loved everything he did (even Sidekicks) but as an adult, most of Chuck’s work is hard to sit through. Silent Rage, however, is not the standard Norris fair. Straight away it’s more of a horror movie than anything, and Norris isn’t constantly fighting off bad guys left and right.

There is the standard Norris beating up seven guys at once scene, as Norris takes on a group of bikers at a bar. This is, of course, to let audiences know that Stevens can handle himself, and is a display of Chuck’s skills. There is a bit of a love scene, with Stevens and his girlfriend spending the day together. The two of them do the normal things people in love do: have sex to cornball 80’s easy listening music.

The slow build to the showdown between Kirby and Stevens is awesome. Stevens shows off by beating up a bunch of bikers and Kirby takes down victim after victim, thinking nothing can stop him. Then we start to see more of the Halloween elements, with Kirby wearing a jumpsuit, his hair being bushy (looking like the Myers mask in the shadows), and getting shot six times and falling from a high place.

The ensuing chase with Kirby getting blown up and set on fire, and then the final showdown is downright awesome. There is nothing quite like a Chuck Norris fight scene, and with Norris fighting someone who isn’t easily defeated, it’s even better. I think the finish with throwing him down the well was clever, as they had painted themselves into a corner with Kirby being unstoppable. There’s even a final jump scare at the end, which still gets me every time. 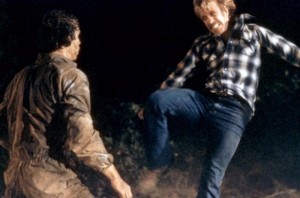 The film does slow down in the middle portion, but I think it sets up the finish quite nicely. I can see why people would get bored though, the whole love making scenes could have been scrapped if you ask me. The music, well the opening and closing theme, is pretty scary, but the love song in the middle of the movie is downright torture to listen to.

Acting: The acting is standard far for a slasher movie, and Norris brings his silent but dangerous acting here. It’s not going to win any awards, but I really enjoyed Norris playing the role straight and not dropping one-liners to try and appear like a bad ass, like he does in his later films. Brian Libby, who’s been in a number of other projects (like Shawshank Redemption), does a great job as Kirby. As a kid, I was terrified of the character, and he’s still a little creepy today. Ron Silver does a great job with his small role as well.

Gore Factor: Plenty to see here with an axe to the face, a needle through the neck, a hanging and even a back-breaking bear hug!

Nudity Factor: The ladies get a young and shirtless Chuck Norris, the guys get some decent topless footage from Toni Kalem and a biker chick during the bar fight scene.

Overall: At the time when Silent Rage came out, Chuck was just starting to gain some popularity, having starred in a number of kung fu movies like Good Guys Wear Black and Forced Vengence, both of which are not very good movies. Silent Rage would prove to be the first Norris movie with some actual teeth in my opinion. Sure it ripped off Halloween (a lot), but it’s still a creepy movie with Chuck F’ing Norris in it. Check it out!