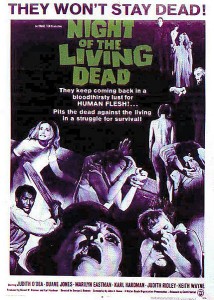 Written by: George A. Romero & John A. Russo

Plot: The story follows characters Ben (Duane Jones), Barbra (Judith O’Dea), and five others trapped in a rural farmhouse in Pennsylvania that is attacked by “living dead” monsters. Can the people survive the dead onslaught through the night and more importantly, can they survive each other?

Review: The first movie in the Romero zombie franchise is a classic for sure, but it’s not for everyone.

We meet Barbra right away at the beginning of he film, traveling with her brother to visit their father’s grave. They get to stay only for a few minutes before a man walks up and attacks Barbra. This is after the famous “They’re coming to get you Barbra” line from her brother, which was meant only as a joke. Barbra’s brother tries to fight off the man but takes a tumble, cracking his skull open on a tombstone. Barbra gets away in their car, but crashes it after a few minutes, forcing her to leave on foot.

Barbra eventually finds an old farmhouse and taking refuge there she meets Ben, our hero of the film, just a few minutes later. Ben tells her of towns overrun with these monsters, and that people are starting to realize their the dead coming back to life. Ben, not having enough gas to drive his truck any further, stopped at the farmhouse due to seeing a gas pump, but neither of them are able to find a key to unlock it.

Not long into the night the two of them meet an older married couple, Harry and Helen Cooper, along with their daughter Karen. They also meet Tom and Judy, all of whom were hiding in the basement. Karen, Harry and Helen’s daughter, was bitten by one of the monsters and she lays in the basement sick (this is important). The seven of them board the house up and fight through the night to keep the monsters out, but end up facing off against each other as to what’s important and what’s going on outside. 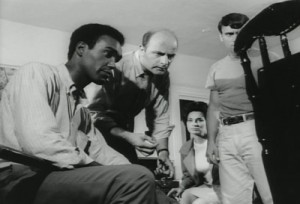 Eventually Ben, Tom and Judy make a run to the gas tank after finding a set of keys, however Tom accidentally spills gas on the truck while a torch (which scares the monsters) was in the back, resulting in the truck exploding and killing them. Ben, Barbra, Helen and Harry are left, with Ben and Harry constantly arguing back and forth. The two of them end up struggling for control of a gun found in the house, with Harry being shot. Helen is attacked by her daughter and not long after the monsters are able to break in and take Barbra. Ben retreats to the cellar and lasts through the night. He comes out the next morning only to find the zombies dead at the hands of a pack of hunters and policemen who are clearing land and houses of the monsters. Before Ben can identify himself, one of the hunters opens fire and fatally shoots him.

The ending left audiences horrified and a good portion of them believe that Ben surviving the “ghoul” onslaught only to be killed by a group of white people was symbolism from Romero. George Romero himself has denied hiring Duane Jones to play Ben simply because he was African American, and that he hired him for his acting ability. I believe him, and Romero would use his next Dead movie to push his ideals and opinions on moviegoers. The ending to me played on the fears that surviving people would have. In all the confusion of everything that’s going on, they’d shoot first and ask questions later.

Personally, I enjoy the movie even today, but for those first viewing it they may not understand why it was scary back in the day, and may not even care for it now because it does move at a slow pace. You have to put your frame of mind into the times of the 60’s, when monster movies were the norm and this was quite shocking for audiences.

I appreciate the writing and directing here, it does move slowly at the beginning, but once the monsters start coming out and you get to the middle portion of the film, things start moving along nicely. George Romero sets a good, scary tone – keeping things black and white at a time when color was all the rage. The film was low-budget, and honestly it helped in it’s effectiveness. Today the film stands as a gritty little monster flick, and, no, the word zombie is not used in the film. 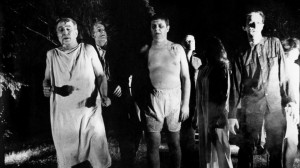 Acting: Duane Jones holds his own as the leading man. Duane being an African American leading man was a big deal at the time. Judith O’Dea did her job as Barbra well; she was constantly afraid and never took charge. I chalk this up to it being the 60’s, and maybe they didn’t believe a woman could step up and take charge of the situation. The supporting cast did well, and the monsters set the tone for the rest of the franchise.

Gore Factor: There’s some monsters chewing on bones, a hacked-up hand, and one guy has his face mangled up (with a scary zoom in shot). What little blood that is around is dried and made of chocolate.

Nudity Factor: Zero. We’ll get our fill in other movies I swear.

Overall: Night of the Living Dead is a classic horror movie and a good one. The problem it has is that it’s dated, and a lot of horror fans will have a hard time enjoying it after seeing it’s sequels and other zombie movies. Still, there’s a reason this started a franchise, and it’s worth your time to check out. Of course you could check out the 1990 remake directed by Tom Savini, but what’s the fun in that?