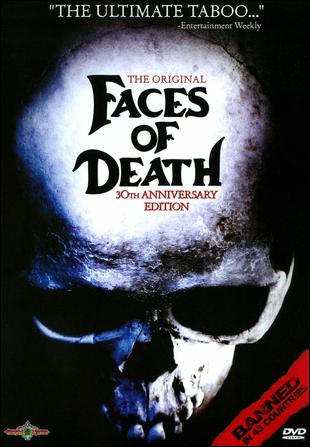 Plot: A collection of death scenes, ranging from TV-material to home-made super-8 movies The common factor is death by some means.

Review: Is it real or fake?

I grew up watching horror movies. Most Saturday afternoons were spent with my brother and mom, at the video store, picking out two movies and a Nintendo game to help pass the time during the weekend. Normally we’d rent a horror movie, and I found myself running through all of the big name franchises as a kid. One movie that we never rented, was Faces of Death.

As a kid it’s easy to let horror movies overtake you, and it’s really easy to think that the boogeyman is just outside in the woods waiting for you to go to bed. However you always knew these were just movies, put together by people just to scare others. Faces of Death however had a lore to it, a legend, that it was completely real. My mother was adamant that we not see the movie, because she said it was real. So you can imagine my willingness to rent the movie as I got older and braver about what we watched.

Watching Faces of Death quickly became a rite of passage in my neighborhood between all the guys. You had to watch it all the way, without crying or getting scared. Those that couldn’t make it of course would suffer the rest of their days being branded a sissy. I had my chance to watch the film finally and when it was over all I said was, “That’s it?”

Faces of Death is a legendary movie that came out back in 1978, during a time when snuff films were the talk of the underground movie scene and people were looking for something more hardcore then what Hollywood was producing. Faces of Death would scratch that itch for people, giving them real life death and horrible situations to face down, all “real” of course.

One scene shows a group of tourists in Egypt smashing a monkey’s head while still alive and eating its brains. There are shots of animals eating people and Satanic orgies using dead bodies. There is a segment that deals with an alligator that accidentally entered ‘residential’ waters. The local warden goes in his boat to get the crocodile back into the sea when he accidentally falls over and becomes gator bait. The are other scenes, like car accidents and people jumping off buildings to commit suicide, all stock news footage. Other scenes show the aftermath of deaths, which you can see on channels like CNN or your local news.

There is no narrative here, just a host, Dr. Carr, who talks about trying to understand what we go through when we die. He’s got a creepy sounding voice to say the least, and leads us through various news footage and other scenes. The movie starts with an open heart surgery, and goes into various news segments from around the world before getting to a few “skits” that have people killing a monkey and eating its brains for fun and a prisoner execution. The film eventually ends with no real answers about what happens when we die. It’s all been just a reason to show people and animals that are either dead or getting killed.

The film is mostly fake. This wasn’t known however until the mid to late 90’s, when people who worked on the film started coming forward wanting to claim credit for their work. Since the film was presented as a mondo film, no real names were used in the credits. In fact, the writer and director listed above is official, but they’re actually the same person using two different aliases. John Alan Schwartz handled both writing and directing duties, but just to keep the idea of the film real, he changed his name so no one would figure it out.

Thanks to people coming forward to claim their work, we know that about 95% of the film is fake. The monkey being killed and it’s brains eaten….fake. The prisoner getting executed via electric chair….fake. There’s plenty more as well. There are some real portions of the film, like the slaughterhouse scenes (which are pretty damn gross), and they can be unsettling.

To Schwartz’s credit, the film doesn’t feel disjointed. Even watching it thirty plus years later, the film does have a flow to it. It starts early with easy to handle stuff and gradually builds from there. There is no real soundtrack to listen to, and no actors to take seriously. It’s a bunch of bits, one after another, before the credits roll.

Acting: The “fake” portions of the film are almost too funny to take seriously. The actors lack any real skill and can barely stumble through their lines.

Gore Factor: Not really as gory as you might think considering the name of the film. The slaughterhouse scenes will make you cringe for sure though.

Nudity Factor: There’s a small boob shot of a mother and her baby taking a bath together. It’s weird when taken out of context.

Overall: Faces of Death was in its day an underground hit that had everyone talking. Plenty of other mondo films, like Traces of Death (which is 100% real) have come out since that put it to shame. Still, Faces of Death has its place in history as being the first movie that catered to the hidden desires that some people have of wanting to see real people die. It’s hokey at times and in some cases more of a comedy then a scary film. If you watch it, just know that in its day people were honestly creeped out by it.