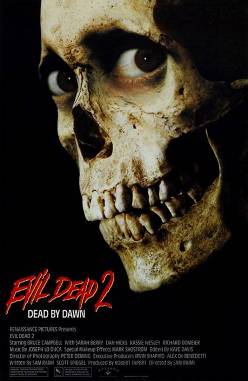 Plot: The lone survivor of an onslaught of flesh-possessing spirits holes up in a cabin with a group of strangers while the demons continue their attack.

The first Evil Dead film introduced the world to Ash and his chainsaw. Trapped in a cabin out in the remote wilderness, Ash had to fight off evil spirits and the dead after unleashing them via the Book of the Dead. Ash eventually survived the night while his girlfriend and friends were killed. However the door was left open for a sequel so of course, that’s why we’re here.

Evil Dead 2 starts off with a recap of the first film, although it changes things a little bit by eliminating the secondary characters from the first film. It really doesn’t matter to the story of the first film or the second, but this decision by the film makers caused quite a bit of confusion over this film.

I have to bring up this confusion because it’s plagued the film and fans since 1987. Some fans believe that since the recap excluded all of Ash’s friends, this film is a remake of the first one. I don’t understand the confusion since the film starts with Ash being the only one alive, just like how the first film ended. Also, we get new characters here with their own stories and the film ends differently then the first one. Evil Dead 2 didn’t retell the first film’s story, it just refreshed us on what’s happened.

Now that we’ve gotten that out-of-the-way, let’s talk about what happens this time around. Ash, still trapped in the cabin, meets Annie (whose father owns the cabin and Book of the Dead). Annie has brought her boyfriend Ed (her fathers associate) and two locals who helped them reach the cabin.

The new group believes Ash killed her father and mother and his friends, but eventually come to find out the Book of the Dead is behind it all. Of course, this means the new group has to try to survive the night and the demons/zombies from the book. We also find out more about the book of the dead, adding to the lore behind the Evil Dead franchise.

Along the way we get a number of great moments, such as Ash having to cut off his hand but replacing it with a chainsaw. Ash also gets tougher, spouting off one liners and taking demons out even though he’s still goofy at times. The character grows from the first film which is great, but unfortunately, the other characters are pure fodder. We barely get to know them, and honestly, it’s hard to care about them when they meet their end.

Sam Raimi made the second film far more entertaining than the first, but it comes at a cost. The first film was serious in tone, trying to scare you with these monsters and its setting. With Evil Dead 2, that serious tone is dropped in favor of going completely slapstick. There’s a number of Three Stooges-type moments, like when Ash’s possessed hand slams a number of plates on his head. The one liners, while cool, are fairly silly considering what’s going on around the cabin.

The film cuts a good pace, but does slow down a bit in the middle. Of course, this is to help build for the finale, which ends up being quite crazy and out of left field. The ending sets up the third film in the series, and I think it’s quite original and unexpected. Everything is shot well and sounds good. Raimi really knew his craft by this one.

Acting: Bruce Campbell was pretty much born to play Ash. Like I said during the review, it’s great that Ash finally stops running and screaming and starts kicking ass. Bruce plays the role to perfection, and nobody does it better.

Sarah Berry plays Annie Knowby, a cute and strong leading woman. There’s nothing that sticks out about her performance, but she’s also not bad in any way.

Dan Hicks, who plays Jake, is over the top in his white trash portrayal of Jake, and he often times draws laughs with unintentional comedy. He’s great.

Gore Factor: The blood is green this time around to help with the film’s rating. Still, there’s plenty flowing here, with Ash chainsawing his own hand and plenty of monsters getting chopped up. Fun times!

Nudity Factor: There’s a naked stop motion corpse running around with a chainsaw, if that’s your thing.

Overall: Evil Dead 2 is a less serious affair then the first film, and this trend would continue. Was it a wise move? Probably for the sake of the franchise. It would be hard to keep the character in the same setting and have it not play out the same way if they didn’t go the slapstick route. However, I like Ash this way. The one-liners and sawing demons in half is great popcorn fun. This won’t scare horror buffs, but it’s still a fun watch on a random evening.