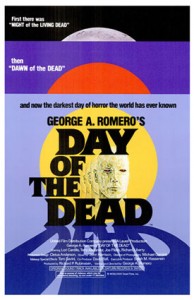 Written by: George A. Romero

Plot: A small group of military officers and scientists dwell in an underground bunker as the world above is overrun by zombies.

Day of the Dead takes place in an underground Army bunker, with the world now completely taken over by zombies, humans are few and far between. The people living in the bunker are split between three groups. One group is the Army, who are now lead by Captain Rhodes. The second group are the scientists, who are working to figure out how to stop the zombie plague, or cure it, or why it happened. The final group are two civilians who have no affiliation to either the Army or scientists, but work alongside them when needed.

Sarah, our lead of the film, is a scientist who acts as a liaison between the other scientists and the soldiers. Thanks to being underground for so long, everyone is starting to lose their minds. The soldiers are on edge from collecting zombies for the doctors experiments, and the doctors are in turn worried the soldiers are ready to stop helping them. Eventually the zombies are able to make their way into the underground base, cause everyone to turn into zombie food. Sarah along with her two friends and civilians Bill and John are just barely able to escape from the bunker.

I’ve always enjoyed Day of the Dead for a few reasons. One is that we really don’t get much of George Romero’s social commentary, and for me that’s a good thing, because Dawn was a bit preachy if you ask me. Secondly, this is a different kind of zombie movie. Instead of the zombies being everywhere and the threat being constant, here we get to see the aftermath. Seeing what happens after the zombies have invaded is something we don’t normally get to see. It’s always about how people are living in the moment and not afterwards. So while the zombies take a back seat to the plot, they are still incredibly important.

I also like the cast of characters, and how they’re all different from the previous two films. the scientists are trying to find a cure, the soldiers are pretty much on their own with no reason to act like soldiers anymore, and the two civilians, the helicopter pilots, are just trying to hang out and not go crazy. No one is really working with each other, although they are all forced to work together. The relationship is tense to say the least, and that’s what pushes the film forward.

Fans of the zombie genre, the ones that are looking for constant zombie action, will feel let down with this one. After all of the action in Dawn of of the Dead, you’d think Day would be packed with action, but it’s not. In fact there’s no zombie action until the finale, but let me tell you, when it happens it’s some of the most gruesome gory stuff you could every imagine seeing. I think the slow burn to the finale is what really helps the finish of the film, and makes it well worth the wait.

Seeing Dr. Logan, or Frankenstein as some call him, figuring out why zombies eat even without needing too was a quite a sight. In the previous movies viewers didn’t have the chance to any real explanation as to what was going on and why. Everything was just guessing by various people. Here, we get some backup to these theories, and in turn this increases the zombie lore that Romero created.

One thing that always bothered me about the film was the setting. I hate to say it like that, because this is my favorite Dead film, but I would have liked to see more of the outside world. Now that the zombie take over is complete, or so they say in the film, it’d be neat to see just how everything was. We do get a bit of this in the very beginning of the film, but it’s only for a few minutes.

George Romero once again does a great job crafting a story that keeps you engaged and characters that are memorable. Some of the dialogue between Steele and Rickles had me hoping the zombies would get them first. The film wasn’t too well received by fans when it hit, but eventually many came to appreciate what it did for the franchise. Overall, George knew what he was doing with this one, even if it’s a departure from Dawn of the Dead.

Acting: Lori Cardille did a great job as Sarah. She was strong throughout the film, never needing that moment to snap into it. She’s also hot, that helps.

Joseph Pilato was over the top crazy as Captain Rhodes, basically he was the films bad guy. I think he went over the top in places, but maybe that’s what Romero was shooting for.

Gary Kalr and Raplh Marrero as Steele and Rickles (which sounds like an awesome 80’s cop show) respectively did a great job with their characters. They were assholes and needed to get eaten quick.

Gore Factor: The gore doesn’t really kick in until the end of the film, but we get plenty. There’s zombies with half eaten faces, missing limbs, and people getting ripped apart. Guts everywhere, vocal chords ripped out, arms chopped off, a suicide, and even some fingers getting bitten off. Tom Savini really outdid himself here, and it’s amazing the film didn’t get a complete X rating.

Overall: I like Day of the Dead because it’s not chalked full of action, and has some explanation as to what’s going on with the zombie epidemic. The setting on the other hand is a little boring, even though it helps the overall story. Seeing the outside world would have been neat. However we get memorable characters and good gory stuff at the end, so it’s hard to not like the film. After this, the franchise would go down hill quick.