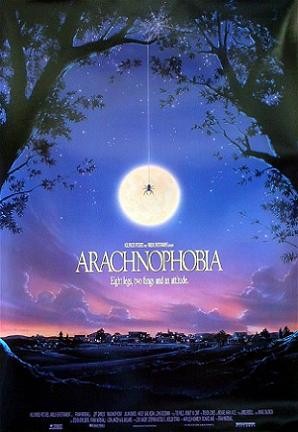 Plot:  A large spider from the jungles of South America is accidentally transported to a small California town where it mates with a local spider. Soon after, its offspring are taking over and dropping bodies left and right.

Most people are terrified of bugs, and spiders lead the pack when it comes to scaring people. Enter Arachnophobia, which I imagine had people twitching in the theaters upon its release. I remember the film hitting cable and watching it with my mother who was deathly afraid of spiders. Gives me the heebie jeebies just thinking about the movie.

The story sees a small town doctor and pest terminator go up against a deadly infestation of spiders. These spiders made their way to the States from South America, and have an extremely deadly bite where death occurs within twenty seconds of being bitten.

Of course, residents don’t believe that people are dying due to spider bites, which totally makes sense because four or five people dropping dead in a small town over a period of three days is just coincidence. To make everything worse, our lead, our hero, Dr. Ross, suffers from Arachnophobia. It’s neat that our lead is afraid of what he’s up against, because of the intrigue in watching him overcome his fear of spiders along the way.

Ultimately the nest, along with the queen and general spider are found living in barn owned by Dr. Ross, and is spreading its webbing and reproducing at an alarming rate. Dr. Ross has to get over his fear of spiders, and  teams with the awesome local exterminator Delbert McClintock to do battle with the spiders. The ending is a bit drawn out, but has a satisfying conclusion, even if it’s a little over the top.

Arachnophobia has a lot going for it. For starters, having spiders be the main villain(s) works because almost everyone hates bugs, even more spiders that look like they can kill you with one bite. The spiders here not only look scary, they jump and jump well. Watching the characters trying to find them adds to the suspense factor, and it’s great.

The writing keeps the film moving along nicely. Even though it was his first film, Frank Marshall does a great job keeping the creep factor up with spiders coming out of the sinks, being under toilets and other places that make you worried. That’s where the film becomes creepiest, when you realize that spiders could be in all these places around your own home.

However, there are some problems with Arachnophobia, besides being an annoying title to type out when reviewing. For starters, it’s pretty damn convenient that the spiders take up space in the barn owned by Dr. Ross. It’s also convenient that during the finale, when there are spiders covering the walls of the house and our lead is trying to get his family away from them, that no spiders manage to bite anyone. During the early portion of the film, the spiders are able to easy bite and kill people within a few minutes. At the end, when they are hundreds of them everywhere, they manage to kill no one.

Also during the final climatic fight between Ross and the queen spider, he flings it into the electrical box in the basement, setting it on fire. That should have been enough, but instead the spider manages to leap five or six feet, and Ross just happens to land a center mass shot with a nail gun on it. What?! I know this is a horror/comedy, and we have covered some questionable films that are hard to believe, but for Pete’s sake, did they really need to finish it off with a nail gun?

Acting: Jeff Daniels does a great job as Dr. Ross, and this was before Dumb and Dumber so you can still take him seriously as an actor and leading man.

John Goodman is great in everything he does, and Delbert sticks out as a cool customer with the best one liners in the film.

Harley Kozak does a fine job as Mrs. Ross, I remember taking a shinning to her in this and Necessary Roughness.

Gore Factor: There’s some nasty spider bites, a corpse that’s been drained of it’s fluids, and one gross out spider squash scene that looks the same as the inside of a peanut butter and jelly sandwich.

Nudity Factor: There is a shower scene but we get nada.

Overall: Arachnophobia is a fun film to watch that will make you think spiders are closing in on you. Its got the right amount of comedy and horror to keep it feeling fresh and not corny. Worth a rent, heck worth a buy.