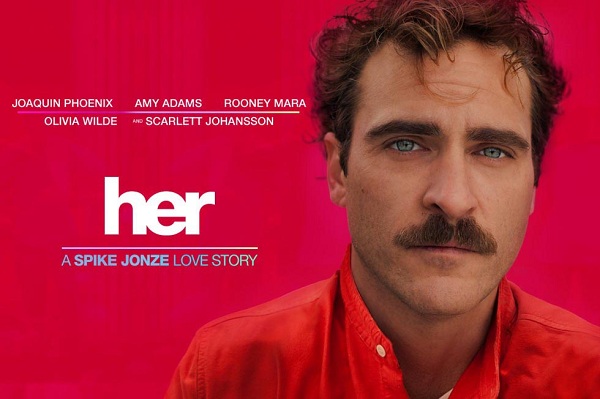 The trailer for Her was one that I was immediately drawn towards. I don’t know if I am the biggest Joaquin Phoenix fan, but I find myself gravitating to his movies because of how good of an actor he is. In Her, he joins a great ensemble of Amy Adams, Rooney Mara, Olivia Wilde, Chris Pratt, and the voice of Scarlett Johansson. As this review is written, Her won the Golden Globe for Best Screenplay. Her is also nominated for Best Picture and Best Original Screenplay at the 2014 Academy Awards. Spike Jonze should be recognized for his willingness to risk making a movie about unconventional love that makes you question what the word, and the feeling, really mean.

One of the keys to Phoenix’ success is his ability to morph into the character he is playing. In Her, his complications and vulnerability create Theodore Twombly, a middle aged man who finds himself speaking on the inside more than the outside. Twombly is almost always connected to the Internet and relies on it in so many ways; it is not outlandish to think that he could fall in love with it.

The film centers around a series of dialogues between Twombly and Samantha (Johansson) and their relationship grows into something… beautiful. Imagine the opportunity to have a “friend”, in some sense of the word, at the tips of your fingers who is intelligent and witty. This “friend” gives you positive affirmation and is there whenever you need them. That is what Her is all about. The “friendship” that develops between Twombly and Samantha is due to his reliance on technology and his need to have someone or, in this case, something. As the movie drives forward, it is at a pace that lets you feel the positive and the negative with every interaction. When Twombly attempts to humanize Samantha, it is heartbreaking and heartwarming at the same time. Twombly’s vulnerability is that of epic proportions and he is looking for something in any way, shape, or form. The movie is only half his though, Samantha is what drives the film from fantasy to hopeful reality.

I am a fan of Isaac Asimov and the Three Laws of Robotics. I tried to integrate those rules into this film and Samantha’s role and they didn’t fit. It made me wonder what Samantha’s rules for existence were. Her artificial intelligence is so much more advanced that early robotics. This could then be aligned with the idea of the film I, Robot, and Sonny the robot wanted more than his robotic way of “life.” Samantha appears to have emotions in some sense of the word and she discusses these feelings with Twombly. Samantha has visions of wanting to be real and next to Twombly. It is these visions and discussions that they share which is the most heartbreaking piece of the film. Samantha and Twombly constantly ponder whether or not the evolution of Samantha is just programming or if it is something more. The film walks this fine line of reality and fantasy and you pick the side of wanting Twombly and Samantha to see and be with one another or for Twombly to find what he has been looking for in real life.

His real life relationships don’t go over as well as his artificial relationship with Samantha. Twombly is going through a divorce in the film from his long time companion, Catherine (Rooney Mara). His best friend, Amy (Amy Adams), is also going through a separation. Twombly finds himself struggling to hold on to his marriage that is ending before his eyes while he offers support for Amy who is going through the same thing.

As the film winds down, the dynamics of the relationship between Twombly and Samantha change for better and for worse. Like most relationships, the reality of the situation sets in and both members involved want something different than the other. It is that want that is the wedge between reality and fantasy. Twombly’s realization of Samantha’s capabilities sends him into despair. The idea of Samantha being his but not his is one that he has a hard time accepting. This is the struggle that Her is all about. What is real in situations of friendship and what is real in situations of love? It is about the perception of the individual and Spike Jonze tells the tale in a masterful way.

Her is an amazing ride that has to be seen to fully understand and believe. The concept of falling in love with an operating system is something many will shutter at, but give Her a chance and you will question what it is that you are looking for. This is without a doubt a love story that will give you an emotional ride and want to spend time with that person in your life that makes you feel. I am hoping that Her will walk away with the Best Original Screenplay on March 1st and have not watched a better original movie this year. I ranked Her as the 3rd best movie I saw that was released in 2013. It was truly an inspiring work of film that made me think the entire time I watched it.

Thank you for joining me for this review of Her – You can’t shutdown LOVE. Please stay tuned to the Place to Be Nation for more movie reviews and also my look at the nominees for this year’s Academy Awards. If there is a film you’d like to see me review, please let me know. Here is to 2014 and the movies!