Greg: Don’t adjust your monitors. It’s really us! After another unexplained hiatus, we’re back, and we’ve mixed up the order of our columns to bring you this special (and long-awaited by … us) Longbook Hunt. We are taking on a book that has recently experienced a resurgence in popularity thanks to some Marvel promotional might — Mark Millar and Steve McNiven’s “Old Man Logan.” 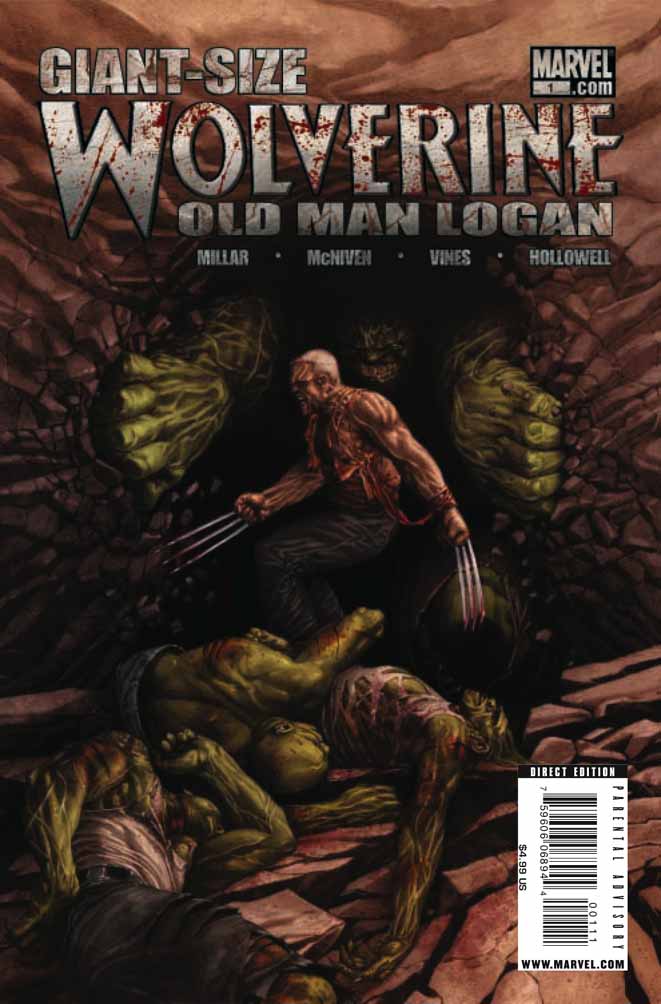 Nick: For those who may only be recent visitors to your local comic shops, this isn’t the Old Man Logan series currently being sold on shelves nationwide. No, this is the original story told by Millar and McNiven during their run on the Wolverine solo title back in 2008. The premise, as you may have guessed, revolves around Logan as, well, an old man.

Greg: This was something of a white whale for me, as Wolverine is my favorite Marvel character, yet this (arguably the most popular Wolverine-centric story of the last 20 years) had somehow eluded me. Thankfully, this column gives me the motivation and the wherewithal to solve such problems.

This story dropped during what was, in my opinion anyway, a pretty rocking time for superhero comics, what with space epics from both companies, rampaging monsters in Marvel and creative experiments at DC. Perhaps that’s why it slipped under my radar at the time, but, nevertheless, it made its mark and has only grown in reputation since its release.

Nick: I, too, had gone years without ever reading this one. I actually picked up the first issue of the new Secret Wars tie-in series and wound up loving it so much, I instantly sought out the original series. So, I was largely unfamiliar with the story coming in. I mean, I knew that we had an Old Man Logan running around in a post-apocalyptic version of the United States. Other than that, I had no real idea of what to expect. Greg, was your lack of knowledge similar?

Greg: Identical. All I’d heard was it was basically Wolverine as played by the grizzled Clint Eastwood of, say, “Gran Torino.” I knew that sounded awesome, but I knew very little about the actual plot or supporting cast.

As it turns out, the story most reminds me of a different Eastwood classic: “Unforgiven.”

Nick: Yes, the entire story revolves around the reluctant gunfighter (just go with it) coming out of retirement one last time in an effort to provide for his family. That’s right, this Wolverine is married and has two young children and as with Unforgiven, a heap of financial problems. Wolverine and his family live in a section of the country overseen by a gang of murderous incestuous Hulks (just go with it) who demand payments in exchange for not smashing them to bits.

But when the Logans are short on a payment and his family is threatened, Logan is pulled back into the hero game by an old friend, Clint Barton. Hawkeye is imagined here as a blind old mercenary/smuggler who’s still as deadly as ever despite his lack of sight. Various other villains and heroes pop up at time, but Clint’s wit and awesome fight scenes kind of made him a scene stealer throughout most of the book.

Greg: If that all sounds over the top and crazy, that’s because it is. And nobody writes over-the-top crazy quite like Mark Millar. Love him or hate him, he definitely believes in “go big or go home,” and rarely has that been on display as rampantly as it is here, in a Marvel Dystopia where the U.S. has been divided into quarters, each run by a different supervillain. Basically, a big war happened and the heroes lost.

Sometimes Millar goes too far with his stories, but here it works. It’s hard to explain exactly why, but there’s just something right about seeing Old Man Logan and Hawkeye running for their lives from a Venom-infected Tyrannosaurus. And Clint’s blindness serves both the banter between old friends and the inventive fight scenes rendered by McNiven.

“Unforgiven”-meets-supervillains-and-dinosaurs sounds like it shouldn’t work. But it does. Nick, you’ve always been a Millar supporter. How does the content here compare with his catalog?

Nick: I think it just kind of comes with the territory of a Millar story. This is the same guy who created Hit Girl and wrote the (in)famous “This A doesn’t stand for France” line to come out of Captain America’s mouth. So, you kind of have to decide if Millar’s style appeals to you or not. It certainly appeals to me, and this is perhaps the most “Millary” story I’ve read. A post-apocalyptic alternate future Marvel U with a western bend just kind of works for his style, and it gives us some really great moments with concepts that sound idiotic on paper. Symbiote dinosaurs, inbred Hulks … all of it hits for some reason.

But as much as he undoubtedly turns his hat around backwards and takes it Over The Top, there are also some great moments of restraint here. Millar takes a less is more approach to Wolverine himself, showing a man who has left behind all of his former self despite living in a world that seems to need that kind of antihero more than ever. Consider the fact that Logan goes a full seven issues before we ever see him pop his claws, and it’s clear this is a different approach than the somewhat overexposed all-powerful Wolverine that has run roughshod over the Marvel U for what seems like more than two decades now. We’ve seen Wolverine do every badass thing imaginable in modern comics, so to have him do something as simple as popping the claws and it actually land as an extremely important moment is impressive.

Greg: Wonderful point! Less is truly more with overexposed characters (and, really, with most characters, period), and of all creators, Millar may be the least likely to get that. Yet here, it’s on full display, and like he did with some of the classic Avengers characters in his Ultimates books, he strips Wolverine down to his bare adamantium bones and illuminates the things that made the world fall in love with the character in the first place.

Due to events that transpired during the aforementioned Heroes vs. Villains war, Wolverine was effectively killed, with Logan leaving everything about his old life behind. The reveal of exactly what pushed him to that breaking point is the most powerful moment in the entire story, so we shan’t be spoiling it here, but I think it’s my favorite Millar twist and restores the pathos that has always been at the heart of any great Wolverine story. I’ve long said that when Marvel revealed Wolverine’s true origin, the company eliminated much of what made the character tick. Here, Millar finds a way to recapture the magic and give us a grounded character surrounded by unfathomable oddities.

The twists and turns along the way serve both to deconstruct the man Logan has become and reconstruct the myth of Wolverine, serving as an emotional reminder to me why this character was so important to me as a child.

Nick: Well said , sir. And by the time that myth has been completely reconstructed and the claws are popped, I don’t know that I’ve read a more “earned moment” in a comic. It’s a fist pumping, “oh shit” moment in every sense of the word and the inevitable bloodbath that follows delivers in every sense of the word. Wolverine is fully unleashed, and as much as we’ve talked about Millar, a lot of the credit for the final act of the story being as impactful as it is needs to be given to artist Steve McNiven. His art is detailed throughout, but when it’s time for some gore and bloodletting, he kicks it into another gear. I love Sorrentino’s take on the universe in the current series, but I’m afraid McNiven will always be the standard bearer for this version of the character.

Greg: Oh, McNiven is incredible here. From the time-forged wrinkles on Logan and Clint to the irrepressible smirk on Red Skull to the crazed dementia of Old Man Banner, McNiven makes these fantastical figures seem like real people. I could easily buy Eastwood and Michael Douglas stepping into these roles, because they’re drawn that believably. And the violence is exactly what is needed from an iconic Wolverine story. McNiven does a great job channeling the raw fury of Frank Miller’s Wolverine, showing an unbridled rage when the time is appropriate.

But it’s not just the action or the facial features that shine, it’s the general mood. Logan’s family time is drawn with a tenderness rare for these types of story, and it only makes the eventual bloodletting that much more effective. As we said earlier, less is more. Although in the case of the action scenes here, more is definitely more.

Nick: Couldn’t agree more. You’ll notice we haven’t discussed the plot much, and I’d like to keep it that way. Logan’s backstory and the journey he takes over the course of the story is something you really should experience as fresh as possible, even if it has been more than seven years since the story began.

However, one thing I’d like to revisit is its place among the great Wolverine stories of all time. Does it have a place there, Greg?

Greg: I’d say so, without hesitation. Its ranking in the pantheon is up for debate, and there are several critical favorites I’ve yet to read (chief among them Millar’s other significant Wolverine story, “Enemy of the State”), but this undoubtedly belongs in rarefied air. If you exclude X-Men stories, its position can only grow. For me, I still rank this behind the Claremont/Miller “Wolverine” mini-series from 1982, but it’s sitting pretty right in my top three. It checks off all the major marks of a great Wolverine story: pathos, killer action, and the battle between man and beast.

And I dare say the image of Wolverine’s face when he returns home after his journey will last with me just as long as the iconic Frank Miller cover to Wolverine #1 and the John Byrne “Now it’s MY turn!” from Uncanny X-Men #132.

Nick: I can’t comment with any real authority on the matter given my lack of reading experience in the X-Men and Wolverine catalogues, but its certainly the best Wolverine story I’ve ever read, and perhaps the best of Millar’s career. It really is that damn good, so to even ask this question seems a bit pointless, but here we go anyway: Is this a buy, read or skip for you? It’s a must-own if you ask me. It’s not just one of the best Wolverine stories — it’s one of the best comics of the last decade period. If you’ve somehow missed it the way we did, rectify that NOW.

Greg: Of course I concur this is a buy. Wolverine will never be the preferred character for some people, but I’d imagine fans of the X-Men, Marvel or Westerns will dig the heck out of this. Buy it at your local bookstore, comic book shop or through the Amazon link on this page.

Nick: Well, I suppose that about does it for this week’s Longbook Hunt. Be sure to check back next week when we Countdown a topical list that we planned out months ago and will in no way be just pulling out of our collective asses at the last minute.