Greg: Indeed, the Hard-Traveling Fanboys have returned to scour the trade paperback bin once again. This month, we will take a look at the first volume of one of the most critically acclaimed series of the mid-2000s, Gotham Central. Written by crime specialists Ed Brubaker and Greg Rucka, drawn by Michael Lark and published by DC Comics, Gotham Central was, to my knowledge, the first major series to focus exclusively on the Gotham Police Department rather than Batman and his allies. Each issue reads a bit like a police procedural, but mixed with the politics and supernatural happenings of the DC Universe. 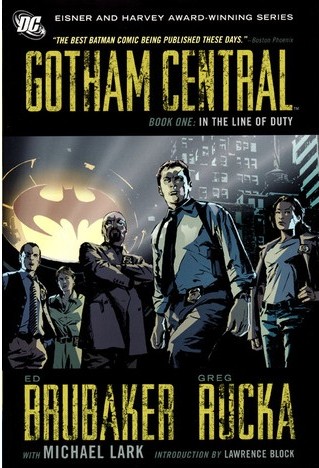 In this edition of The Longbook Hunters, we’ll eschew our typical conversational format in favor of a more traditional roundtable style due to the busy schedules we’re both enduring. In the interest of full disclosure, this is a book (and series) Nick has already read, while this was my first read-through.

1. When did you first become aware of Gotham Central, and what were your initial thoughts upon hearing the concept?

Greg: I heard about the series when it was being published, as I was a regular reader of Batman and Detective Comics trades. To be completely honest, and to show you where I was with my comic book reading habits at the time, I thought it sounded dreadfully boring. I mean, a Batman book without Batman? I was somewhat familiar with Rucka and Brubaker through their Batman story “Fugitive/Murderer,” which I found merely decent at the time. But the other thing keeping me away from the book was the fact that it focused on mostly new characters rather than old favorites like Jim Gordon and Harvey Bullock.

Nick: I kind of gradually became aware of it as I began to get more and more into DC Comics in the summer of 2007. I eventually found my way to No Man’s Land, a story I enjoyed very much and that Greg Rucka had a major hand in it. Wikipedia kind of filled me in about Gotham Central and, like Greg, I didn’t think I’d be overly interested. However, as time went on, I heard more and more rave reviews. I also read a bit of Ed Brubaker’s Captain America run and thoroughly enjoyed it, so that increased my desire to check out Gotham Central, which I finally did in the summer of 2012.

2. The book starts with a rather grizzly murder involving Mr. Freeze. How would you grade this as an introductory arc, and what did you think of the usage of Freeze?

Greg: Freeze is a difficult character to handle. There’s a reason the Animated Series interpretation of Victor is so well regarded: it’s one of the only compelling takes he’s ever had. That being said, I thought Brubaker and Rucka did a marvelous job capturing what makes Freeze a scary figure. We’ve gotten so many stories focused on the tragedy of the character that sometimes we forget that he’s a villain. Brubaker and Rucka present him as a villain first and a tragic figure second, which goes a long way to remedying that. As an introduction, it was mostly effective. It drops the reader right into an investigation, but the story reveals itself mostly through dialogue pretty quickly. The writers have a good handle on how to write everyday conversational dialogue, and it shines back at the precinct.

Nick: Freeze, despite his wonderful characterization on the animated series, hasn’t really been featured in the comics as much as one might expect given his stature as a recognizable villain. Brubaker and Rucka do a great job, however, of making their Freeze similar enough to the character from the animated series without him seeming to be a direct copy of that character. It’s a line writers have to write with many characters that were redefined in BTAS, and Brubaker/Rucka do a great job here. More important than Freeze, however, is the job they do in setting a tone for the series early. Readers are immediately conditioned to expect more mystery and procedural plots instead of rooftop-jumping superheroics.

3. As the story develops, we see two different shifts of the P.D. tackling cases that seem unrelated but occasionally tie together. Which case was your favorite in these early issues, and what made it stand out?

Greg: Mine was the story “Motive,” in which night shift detectives Marcus Driver and Romy Chandler investigate a kidnapping case that Driver’s recently murdered partner had taken on. In the quest of finding who killed the little girl, Driver and Chandler find their case intertwining with the hunt for the villain Firebug, which is led by Jackson “Sarge” Davies. The emotion was palpable throughout this story, and I found myself drawn into the burgeoning partnership between Driver and Chandler, and guessing right alongside them. The ultimate reveal managed to shock me while still making sense.

Nick: Much like Greg, I very much enjoyed the Firebug tie-in story, as it did a good job of establishing that these different teams of detectives were often going to find themselves working on the same case without even knowing it. It also showed how elements of Bat-villains could be used without having the threat seem so dire that Batman himself would need to intervene. And, the twist was shocking, yet logical.

4. Along the same lines, which shift was your favorite?

Greg: I slightly preferred the night shift. Driver, Chandler, Patton and Sarge had a great repartee throughout the book, and their cases caught my eye a tad more than the day shift’s. I also liked the feel of Gotham at night, perhaps because it’s more familiar.

Nick: Gotta go with the day shift, if only for Renee Montoya and Crispus Allen. I was familiar with both characters before ever reading the book, so perhaps I had a pre-existing attachment.

5. What are your thoughts on writers Brubaker and Rucka? What about Lark’s art?

Greg: Brubaker and Rucka are masters of the craft. I regret to say I haven’t read as much of Brubaker’s catalog as I’d like, but his work on Batman, Gotham Central and Daredevil was stellar. Rucka has been a marvelous comic book scribe for years, writing everything from No Man’s Land to Action Comics to Wonder Woman. He always finds a way to tap into what makes a character tick. In particular, I loved his work with Wonder Woman around the time of Infinite Crisis. This was actually my first big exposure to Lark’s work, and I was impressed. The book has a similar feel to David Lloyd’s distinctive art in V for Vendetta. Because of that, it’s different than you’ll find in almost any other DC or Marvel book. It focuses much more on establishing atmosphere and emotion than crafting an “iconic” look, yet I have to admit I found myself hoping for more Batman appearances, just because Lark had this awesome combination of Bob Kane and David Mazzucchelli in his drawings of the Dark Knight.

Nick: Oh man, it’s hard to think of a two-man writing team that was able to complement each other so well as Rucka and Brubaker. They have similar styles, but just enough differences for you to be able to notice the slight shift in tone from day shift to night shift. They’ve also both proven to be great Batman writers own their own, and Brubaker might be one of the best writers going today after his work on Captain America and Daredevil. Lark’s art was also impressive, rendering a Gotham that felt familiar, yet distinctly gritty enough to remind you that this wasn’t a traditional superhero tale with capes and tights.

6. Were there any areas where you felt the book didn’t succeed?

Greg: I’m not sure the book did enough, in its earliest issues, to establish the current situation in Gotham City for new readers. This took place during a period in the Batman books where Gordon was retired, Bullock was forced off the force (which isn’t delved into much here) and a lot of newcomers are passing through. While this made tons of sense in the timeframe of the early 2000s, it took me a while to remember some of the details. While I remembered Gordon’s retirement, I wanted to know exactly why Bullock had been kicked off the force, as I couldn’t remember for the life of me.

Nick: On a similar note to Greg’s comment, I don’t know that the book did enough to establish the GCPD’s current working relationship with Batman, and where each character stood on that ground. With Gordon off the table for the time being, the link between the Bat and the force was different than it had been for much of the character’s history. That particular aspect could have been assessed a bit more, though I understand that the point was to keep Batman in the background rather than the forefront.

7. Which cop was your favorite in this volume?

Greg: My favorite was probably Sarge, just for the obvious Roger Murtaugh parallels. He had several of my favorite lines in the book, and his dogged pursuit of Firebug may have been the most thrilling action scene of the lot. A close second would be Renee Montoya, who nearly stole the book. Her encounter with Two-Face was both thrilling and heroic, and Montoya certainly stands out as the bravest of a brave bunch.

Nick: Montoya, easily. There’s a reason why this version of Montoya moved the character into a bigger role in the DCU and why so many people were moved or inspired by her story over the course of the series. Plus, Two-Face and all.

8. Grade the volume as a whole, and would you recommend this to those unfamiliar with the concept?

Greg: I would recommend this book to nearly anyone interested in comics. I guess if you are only interested in capes-and-tights or lighter fare, or if you’re a child under the age of 13, avoid this one. But for the bulk of our reading audience, this will be a delightful read. Think of it as “Law & Order: SVU” if that show didn’t suck.

Nick: I’d recommend it to nearly anyone, but with the disclaimer about the slower pace and more mature tone. If you’re from the Silver Age school of “comics should always be fun and light-hearted,” then this book probably isn’t for you. But, if you view the Batman through the Frank Miller/Killing Joke spectrum, then this is right up your alley and can’t be recommended highly enough. The great thing, though, is that this volume is just the beginning. If you haven’t, read the entire series as soon as you can.

Greg: And with that, we leave you for another week. Next week, Nick and I return with a column examining some of the latest news stories in the world of comics. And in one month, be sure to check out The Longbook Hunters as we analyze one of the most controversial and acclaimed DC stories, Identity Crisis. In the meantime, leave us your feedback either through email, Facebook or Twitter (@gphillips8652 and @nickduke87).