Nick: After another weeklong break that we’ll use the 4th of July holiday as an excuse for even though it was due to sheer laziness, we are back for our initial column of the month of July. This time out, we’re going Off the Page to take a look at the big screen adaptation of one of Image Comics’ flagship properties — Spawn. 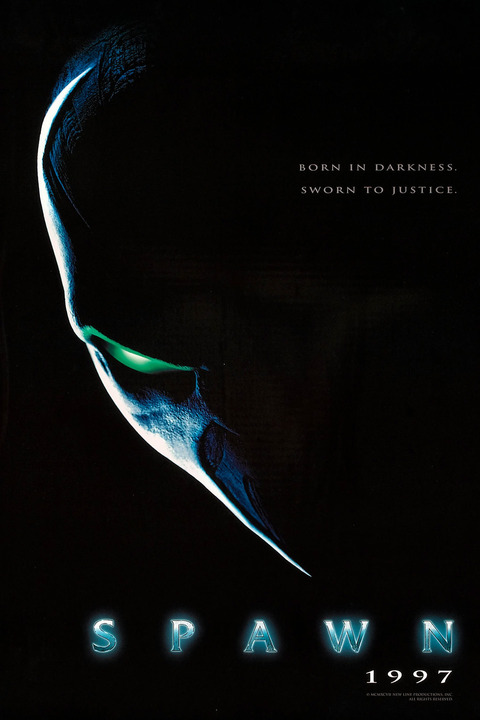 Greg: For those who don’t know, Spawn is/was the defining character for independent-turned-major publisher Image Comics. Artist/writer Todd McFarlane, fresh off an amazingly successful run on Spider-Man, launched the book alongside the works of his fellow Image founders in 1992, and it was an instant smash hit, becoming one of the top-selling comics on the market for years.

Such was the superstar status of McFarlane and his character that movie offers piled in quickly. Just five years after the first issue of Spawn hit comic book shelves, this movie hit the big screen.

Nick: The path it traveled to get there was a bit strange. McFarlane eventually opted to make a deal with New Line Cinemas for just $1….American, provided he received creative input and a cut of the various licensing deals.

The task of actually making the film fell to the cleverly named Pull Down Your Pants Pictures, a company formed by three visual effects artists who met and formerly worked at the iconic Industrial Light & Magic. However, the aforementioned PDYP was largely just those three men, meaning that three visual effects artists would wind up not only overseeing effects, but also directing the primary and second units and also producing the film. And that lack of attention to story, dialogue and characters certainly showed.

Greg: Indeed, which is unfortunate given some of the talent in the movie. The legendary Martin Sheen portrays villainous Jason Wynn, versatile John Leguizamo (though not a favorite of mine) plays The Violator/Clown (more on that later), and martial arts expert and personal favorite Michael Jai White plays the titular character and his alter-ego Al Simmons.

That’s a pretty good collection of talent for what ultimately became a dull, lifeless movie. Of course, there is also plenty of bad acting to go around, not the least of which comes from Nicol Williamson’s portrayal of Cogliostro, the narrator who kicks off the film with what can only be described as one of the corniest opening monologues ever recorded.

Nick: Ah yes, the opening monologue which then transitions into a seemingly neverending credits sequence that features the names of the cast and crew against a backdrop of flames that appear as if they were rendered on a Nintendo 64.

And, make no mistake, despite the talent of some of the actors involved, these performances are BAD. God awfully bad. And not even the good kind of cheesy, over-the-top bad that could have actually made the film somewhat enjoyable. Because, honestly, the film’s biggest sin isn’t that it’s bad — I’ve seen lots of bad movies I love to watch and am always entertained by. No, the biggest issue is that Spawn is flat-out boring. Not even the action scenes ever induce anything more than a “meh” feeling. Rewatching recently felt like torture, whereas we’ve had a decent amount of fun mocking some of our other Off the Page candidates.

Greg: Yeah, our cohort Tim Capel has often referred to movies, comics or wrestling matches that are somehow more offensive than objectively worse projects. These are pieces of art that are just boring.

Honestly, Spawn isn’t *that* bad a movie. It’s bad, but it’s not, you know, Pryde of the X-Men or Spider-Man Unlimited.

And as for the opening credits, well, they set a tone for the N64-generated effects seen throughout the movie. Picture the long opening credits for Richard Donner’s first Superman movie, but without anything interesting happening and very little in the way of motion. Alternatively, picture looking at the background of Kane’s entrance videos for five straight minutes.

Nick: But the difference is Kane’s entrance videos often actually look like flames. These just look like a collection of pixels intended to represent flames.

But I must pause here and actually give praise to one actor — John Leguizamo. Unlike his peers, Leguizamo actually seemed to understand what kind of movie he was in, and he hams it up accordingly. His Clown/Violator is EASILY the most entertaining aspect of the movie, even if it is absolutely absurd.

Greg: Oh, no question. I’ve long criticized Leguizamo for some of his roles, but he’s pretty darn good here. He has a number of genuinely funny one-liners and treats this project like the joke that it is. I found myself chuckling at more than a few points during his scenes, as he reminded me of a cross between Beetlejuice and Arnold Schwarzenegger’s Mr. Freeze.

Unfortunately, nobody else got the memo. Martin Sheen chews scenery, but not in an entertaining way. Rather, he seems to be going for a 1940s mobster-like supervillain, and in the process he just induces groans. Ditto for Williamson, whose Cogliostro sounds like he’s reciting lines from a Donald Pleasance fan fiction.

Nick: I’m largely unfamiliar with Williamson, so I can give him a bit of a pass even though his performance was by far the worst in the movie. His “emoting” consists entirely of a blank stare that never changes no matter the situation. I think he read “wise old man” in a character description and thought a blank stare would best capture that. Who knows? 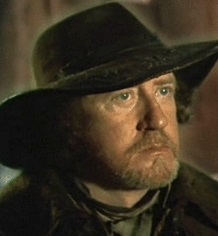 But Martin Sheen gets no pass here. He’s better than this, quite frankly. He’s at least talented enough and smart enough to know when he’s in a B-movie, and should have adjusted his performance accordingly. Unfortunately, he tries to play it straight for the most part and fails miserably. Every scene he is in is groan inducing, even when he’s paired on screen with Leguizamo.

Greg: Speaking of Leguizamo, even he doesn’t get through unscathed, as he’s part of what I consider the worst scene in the movie: a bizarre sequence in which the Clown turns himself into a cheerleader and begins a rather unimaginative cheer for Spawn, complete with horrible late ’90s techno music blaring in the background. I just … I’m not even sure how else to describe it. At least it’s laughably bad, I guess.

Nick: And it occurs with no other character around, so the only people who are seeing the Clown’s insanity are the audience members, meaning the scene doesn’t even serve the story in any meaningful way. It’s beyond bizarre.

Greg: And while we’re on the topic of annoying ’90s things, there is, of course, an Annoying ’90s Movie Kid. This kid befriends Spawn (who helpfully calls him just “Kid” throughout the movie) and charms him through the wearing of a backwards baseball cap and the usage of “Hey, mister!” over and over again. They probably wanted Jonathan Taylor Thomas, but he was too busy or something.

Nick: Perhaps the real accomplishment of this movie is that it feels like one of the most terribly 90s things ever made, which SOME might say is appropriate for the character of Spawn … in their opinion.

Greg: Having never read a Spawn comic in my life, I feel strongly neither way, so I’ll fly the Beige Flag of Neutrality.

This whole thing feels like a waste. A waste of a potentially scary and/or funny concept. A waste of the martial arts skills of Michael Jai White (who gets all of one impressive hand-to-hand fight scene). A waste of graphics that could have been used on a Star Fox sequel.

Even sadder is the fact that the practical effects, when used, were pretty good. Spawn’s costume, in particular, is excellent, and maybe even one of the most accurate superhero costumes ever assembled. The mask looks great too. Unfortunately it’s counteracted by the GODAWFUL cape effects. Anyone with even a passing knowledge of Spawn knows how vital the cape is to his abilities, and the effects here look so horrible that it distracts from the otherwise great costume.

Nick: I’ll again turn to the Nintendo 64 analogy, as the early days of console gaming rendered in three dimensions often featured objects that didn’t quite know how to interact with one another. Characters and vehicles phasing through walls or buildings or even the ground was common, and it always had a bizarre look to it. The cape here is much the same, as edges of it just randomly pass through whole sections, making it look more like a jumble of spaghetti than a flowing, impressive sight that it should have been,.

Greg: We haven’t even touched on the structure of the plot, and that’s because it balances being generic with not making sense. It’s a rather paint-by-the-numbers story of revenge and demonic manipulation (common themes in both comics and movies), yet unlike good movies that tell those stories, it struggles with the actual details.

The most prominent example I can think of is a pretty major plot point — how Spawn discovers he’s been manipulated by the Clown. You see, Clown basically molds Al Simmons into Spawn in order to spark a war between heaven and hell. Luckily, Spawn figures things out before it’s too late. He does this by … just kind of blurting it out.

“You did this,” he says, for no adequately explained reason. And then Clown is just like, “… Yep.”

Nick: Yeah, the less said about the plot, the better. Like everything else in the movie, it takes itself far too seriously and isn’t at all fun, even to mock.

Greg: Despite what I’ve been told was an excellent animated series on HBO back in the day, this movie remains Spawn’s most well-known iteration, which is unfortunate for fans and creator Todd McFarlane. While those making it likely had good intentions, the quality of both CGI and writing for comic book properties at the time weren’t yet at the level they needed to be to make this character work on the big screen.

In the process of trying to make a generic action movie with video game-like effects, director Mark A.Z. Dippe succeeded only in crafting a subpar comic adaptation that will end up forgotten.

Nick: There have been rumors of a second attempt at bringing Spawn to the big screen for years, with McFarlane himself fanning the flames of the rumor mill. Apparently his desire is to do more of a horror take on the character, with Spawn as a rarely seen thing that goes bump in the night rather than a more traditional antihero. Whether that comes to pass or not, only time will tell. But here’s hoping if it does, it will at least be memorable, even if atrociously so.

Greg: In order to wash this taste out of our mouths, we’ll be back next week with a Countdown of our favorite movies from the Marvel Cinematic Universe, even the worst of which is immeasurably better than Spawn.

Nick: Indeed. Until next time, let us know your thoughts on Spawn! Hit us up on Twitter (@gphillips8652 and @nickduke87), email (GregP@placetobenation.com and NickD@placetobenation.com) or through the Place to Be Nation Comics Facebook page.