Mild-mannered reporters by day, Greg Phillips and Nick Duke share an intense love of comic books that has made them the Hard-Traveling Fanboys. During their time at placetobenation.com, the Fanboys have shared numerous opinions and have found some common ground and some areas of discord both among themselves and with the rest of the P2B Comics Staff. However, perhaps no topic has unified the Fanboys and the rest of the staff quite the way the television show “Gotham” has. With that in mind, we proudly present #gothamsucks.

Greg: What, you thought this was just a one and done? We hate ourselves too much for that to be the case.

Nick: No, we figured if we’re going to take numerous publishing breaks, most of which can be chalked up to sheer laziness and apathy, then we need to suffer for our transgressions. That is why we, the Hard-Traveling Fanboys are here — to hate watch Gotham so YOU don’t have to. Don’t worry, you can thank us later.

Greg: And while the first two episodes were only mildly irritating, we’re back this week with the first shining example of the show that Gotham would become. We’re watching episode 3: “The Balloonman.” Yes, the freaking Balloon Man. 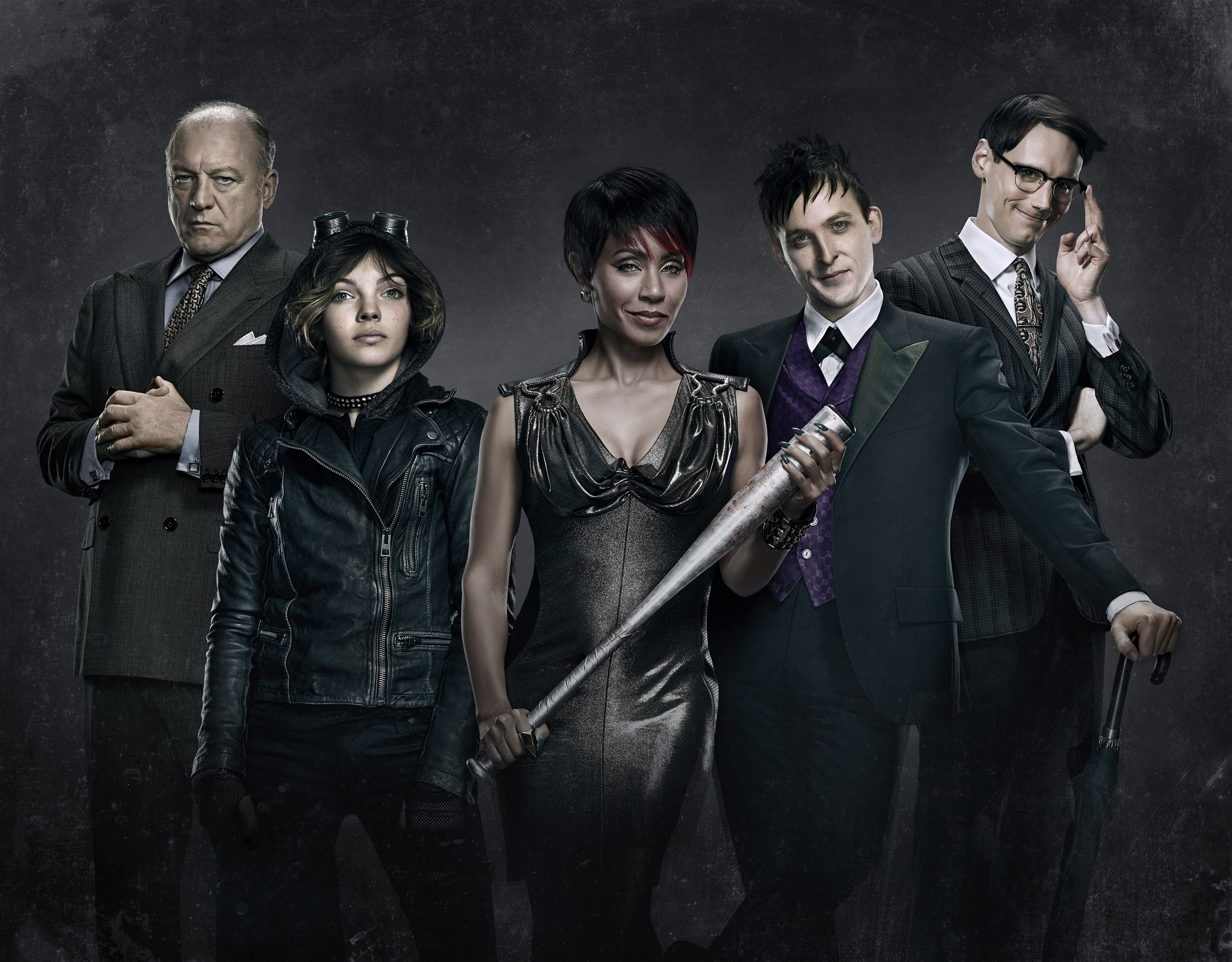 Nick: What is the Balloon Man, you may ask. Well, pull up Gotham on your favorite streaming device, click on Episode 3, and hit play with us right…about….NOW.

Nick: Ok, yet another example of Gotham’s bizarre aesthetics — a bus with a 1970s style mechanical arm that opens the door.

Greg: And a scrambled 1970s TV set on a street corner.

Nick: And freaking clothes hanger rabbit ears on a box TV. What era is this? Does it even know? The characters have cell phones in what appears to be 1973.

This is the stupidest, lamest way to kill someone.

Nick: Aaaaand he just handcuffed a guy to a weather balloon that is apparently capable of holding a man that weighs at least 200 pounds. And he conveniently did so right next to a press gathering, with no reporters seeing the guy.

Oh, Bullock, you old minx! You like food and booze and have no respect for the law.

Nick: HE SHOULD TURN HIMSELF IN

The door actually says “No Admittance” on it. Wow.

Nick: Hey, a stretch of kind of not terrible going on here.

Greg: This guy who brought in Cat looks like Arnold Wesker but isn’t.

It only lasts for a few minutes, but still.

Greg: It has its moments.

Nick: Oh, good lord. She can see in the dark.

Greg: SHE CAN SEE IN THE DARK!

Nick: Because she’s like a certain feline animal, you see. 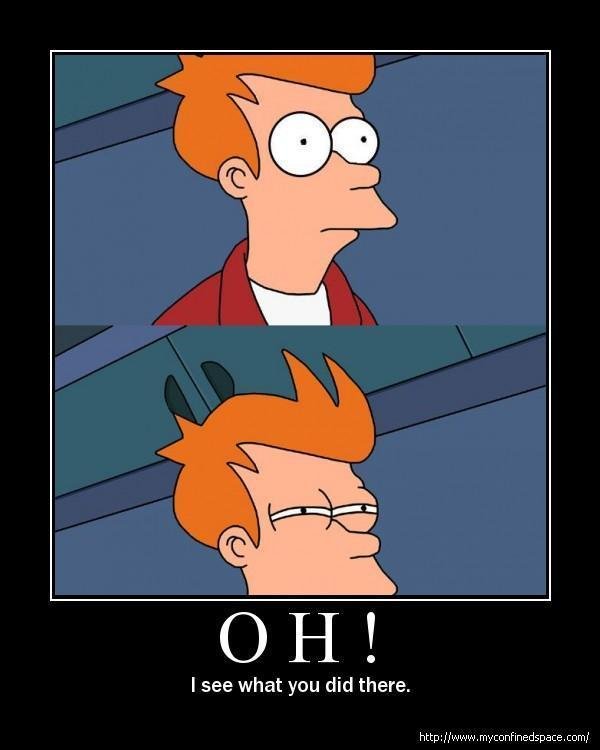 So this version of Selina has cat powers? Is that the implication?

Greg: Or she’s a lying liar. Like Lying Cat. Hmm…

Nick: So Gordon leaves a young girl handcuffed to a stairwell in a place called “Crime Alley?” Smart.

Greg: The scenery, it’s being gnawed.

Nick: And what the hell is that metal thing she’s wearing? 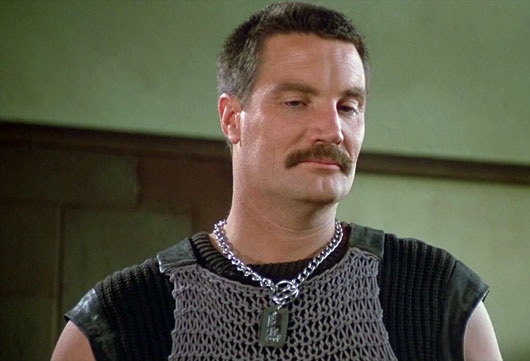 Greg: This is … not the Crispus Allen I was hoping for.

Nick: And again, we said this last time, but I really hate that pronunciation of Falcone.

We interrupt our hate here to bring you the one thing we’ll always praise — Alfred.

Greg: Were those clouds above Wayne Manor or just a whole bunch of concentrated smog?

Nick: This Wayne Manor is actually located in the middle of Gotham’s industrial district.

Nick: Weird accent there from Montoya. Like a Northeastern thing she just only used for that line.

Greg: Oh God, that sewer line was atrocious from Allen.

Oh snap. Gordon with the mic drop on Harv.

Nick: Oh that face from Gordon is ATROCIOUS acting. Trying to be intimidating and just coming off goofy as hell.

Greg: No Batman voice yet though.

Nick: What in the world is a ’40s gangster doing in charge of a weather balloon factory?

Greg: Capone’ll have somethin’ ta say about this!

The Balloon Man looks like Darkman with that getup.

Nick: I was just thinking that!

Like a terrible, not in any way good or redeemable version of Darkman!

Greg: Why was the guy laughing while being lifted to his doom?

That’s approximately a 125-point font on that headline.

Greg: Alfred and Bruce hanging out is among the best things on this show.

Bad layout on that one.

Nick: What a random dramatic shot of Gordon suiting up. Which transitions into a scene with him and Barbara in the apartment. Just a weird transition there.

Oh, we might get vigilantes? You don’t say, Gordon.

Greg: Barbara’s only role thus far is “look really hot.” Which she does well, but …

Nick: Sorry, that’s what that news made me think of.

Nick: Back to old as hell Sarah Essen.

By Bullock’s logic, anyone with a weather balloon is automatically the Balloon Man.

Greg: This silly conversation about balloons, and all I can hear is Jack Nicholson. “My balloons!”

Nick: Bullock’s got an eye for Trebek’s mom, it would seem.

Greg: Time for another Gotham montage.

“Deaf AND dumb.” He sure plays a mean pinball though.

Note to self: LEARN TO FIGHT.

A tender love scene between Fish and her manwhore.

Nick: Who was that random guy? Have we ever even seen him before?

Nick: Yes, look into her eyes.

Greg: Barbara is addicted to what, exactly? Pot? Coke?

Nick: Worse than any of those. She’s addicted to DRUGS.

Greg: Montoya is kind of a jerk.

Nick: Ooooh, what a sick burn from Bullock.

Greg: Bullock is the master of those.

Nick: No, the police wouldn’t have researched how a murder weapon works. Of course they wouldn’t.

What a cartoonish splat.

Greg: They make the inept FBI agents from The Following look like Sherlock Holmes.

Nick: Gotta love it when a crime lord discusses secret plans out loud in the middle of a public place.

“Say hey to us mudda fun me.” They must be eating Wahlburgers.

This is actually reaching an entertaining level of badness.

Nick: I don’t understand how that is a lead.

Greg: The cops alternate between morons and psychics.

Nick: IT’S A NEW DAWN RESTAURANT, YES IT IS.

Greg: And by the cops I mean Gordon and Bullock. None of the other cops do anything.

Nick: This guy is kind of making a lot of good points. Gordon has no response.

Greg: Yeah, it’s like Jesse Ventura at the end of WrestleMania 3 when Gorilla Monsoon argues worth him about the Savage-Steamboat match.

Nick: And now Bullock is attempting to blatantly kill a man. That’s the Harvey I know and love.

Greg: Imagine that — popping a balloon makes it fall.

Nick: More scenery chewing from Fish and not so subtle intimidation from Falcone.

Greg: This subplot is vintage Days of Our Lives.

Nick: There will be more like him. You mean vigilantes?

Greg: This news reporter is doing a lot of editorializing.

Nick: The Nancy Grace of Gotham.

Greg: “This journalist is left to wonder…” Good grief.

“I fell.” Jim, are your parents hurting you?

Nick: Why is she ever surprised he’s home? From what I understand, she just stays at the apartment every minute of every day. Shouldn’t she hear him come in?

Or is she too strung out on DRUGS?

Greg: The DRUGS have made her a lazy millennial who just sits at home in an obscenely expensive loft apartment all day and night.

Nick: No brass ring for her.

Just a bunch of gold and diamond ones.

Nick: So Penguin bought a new three-piece suit with what, that $100 Maroni gave him?

Greg: Remember, in 1980 you could buy suits for that much.

Nick: Oh God no, no autoplay! Make it stop! For the love of God, stop the damn match!

Greg: I think that’s enough for one month.

And curse Netflix for that new auto play function.

Nick: It’s really enough for a great many months, but we are men of our word, after all. So, we’ll be back next month with another trip into this world of suck.

Greg: Or more likely, we’ll chicken out and push it off to another month.

Nick: Either way, be sure to check back with us! In the meantime, give us your thoughts on Gotham at GregP@placetobenation.com or NickD@placetobenation.com, head on over to the Place To Be Nation Comics page on Facebook, or hit us up on Twitter (@gphillips8652 and @nickduke87)!