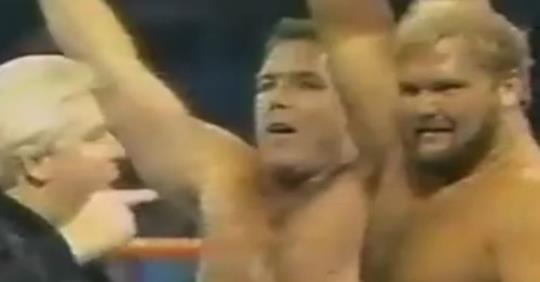 This week we go back three decades for a look at the WWF Superstars of Wrestling from October 22, 1988!

– An examination of the attack on Hulk Hogan by the Big Bossman on the Brother Love Show
– The WWF in the fall of 1988: out with the old and in with the new
– Reasons why Haku was a logical choice for “King”
– What kind of wrestler would you want to be: one known for matches or one who is known for everything but the matches?
– The simple argument for why the Brain Busters WERE a good fit in the WWF
– Comparing two Akeems head to head for 1988-89
– Tito Santana runs into a string of bad luck
– Explaining the difference between the Warlord and the Barbarian
– A revelation by Bad News Brown

Plus:
– Running around downtown Nashville like Henry Hill at the end of Goodfellas
– A true tale of hustling drunk guys for money on the golf course at age 7 that ends with a life lesson
– Dan Quayle walks into a trap
– Singing the Hulkamania Prison Blues
– Famous men named Pork Chop
– Vince McMahon and Jesse Ventura banter galore!

NWA Saturday Special: Thunder Rosa gets her due, and Nick Aldis back in the ring