Another packed week on the GrappleTalk podcast as the MMA world shows no signs of slowing! 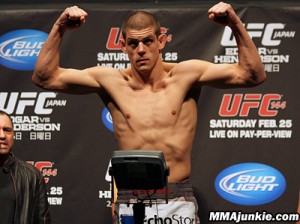 Callum is joined by none other than JOE LAUZON to discuss how the pressure of fighting in his home town got to him in August, his plan to overtake Anderson Silva and what makes him one of the most popular fighters in the UFC.

Also in the show, COLIN ‘FREAKSHOW’ FLETCHER is by to talk about his spell on the the TUF Smashes series, his two fights in the UFC and how he felt that the UFC didn’t appreciate what he brought to the table. Colin is fighting this weekend at BAMMA 14, and is looking to bring home a belt.

Finally, Callum is joined by FoxSports.com’s MIKE CHIAPPETTA for an extended chat about Mike’s trip down under and the FOTY candidate he witnessed while there. They also look ahead to this weekend’s huge FOX card, and try to figure out what the hell the UFC Digital Network is…

The GrappleTalk podcast is brought to you by PlaceToBeNation.com – the only place to be in your pop culture world.