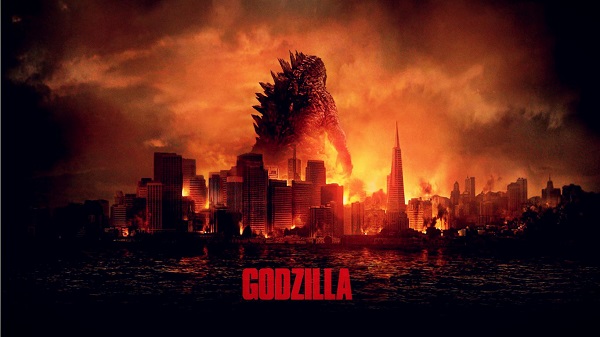 Why did Godzilla suck? Oh, don’t worry. I’m talking about the 1998 abomination from Roland Emmerich. And the reasons for it’s overall mediocre quality revolve around phoned in performances, a weak story, complete departure from the source, the cheesy redesign of the title monster (which I believe to resemble some sort of lizard/potato/porcupine mixture) and the fact the entire film was little more than just an excuse for Emmerich to create more of the destruction porn he demonstrated in Independence Day. It took 16 years, but America has once again attempted to put their own stamp on the world’s most famous monster. Did we learn our lesson?

In 1999, a scientific anomaly occurs in Janjira, Japan which causes major destruction, and the death of Sandra Brody. 15 years later, her widowed husband Joe discovers that the same warning signs are occurring once more and decides to investigate with his son Ford. They find out that the Janjira nuclear plant is harboring a monster which soon breaks loose, and attracts the attention of the mysterious Gojira (Godzilla).

Like I said, the monster in the 90’s movie looked like a number of things, but it wasn’t Godzilla. Here we get an updated version of the behemoth that looks stunningly powerful, bulky, effective, and also harkens back to the original 1954 Toho films from Japan. To sum this portion up, Godzilla actually looks like Godzilla, and he acts like it too.

What we find in the plot is a deeply tense and high-stakes human story. Emotion runs high, and for that we find something halfway decent to wrap around the carnage that the monsters cause. There are real people on the ground, with their lives on the line. It reminds one of the realism you find surrounding the disaster in Cloverfield. This adds little more dimension to it rather than the arbitrary situation room of scientists and generals looking to stop it.

But in balancing terms, it can feel a little too focused on the humans. It certainly lingered a bit on showing us some whole action, and at one point someone in my theater yelled “Get to the fighting.” As much as I hate people blurting out in movies, he had a point. It could have benefitted from more action. There is certainly enough to justify calling it a Godzilla movie, and it’s great to finally seeing an American take on the monster take full advantage of his abilities, but it could have used a little more Godzilla.

He doesn’t factor into a major portion of the film, but there’s still a lot to be said about Bryan Cranston. He is one of the greatest actors alive, and that is not hyperbole. What worked about his performance as Walter White in Breaking Bad is that he was completely invested creating an electrically real persona that you could feel for until the end, even when it’s clear that you should hate the man. In Godzilla, the circumstances surrounding his character justify his descent into a slightly unhinged, but still fantastically emotional character. He showcases a broad range in his screen time with a beautiful family man basis and shattered facade.

Aaron Taylor-Johnson, who put the kick in Kick-Ass, is a wonderful presence in his role of Lt. Ford Brody. He somewhat fills the role that Matthew Broderick did in 1998, but character wise, he fulfills more duties as a father, a son, and a soldier. He’s our link into the story. He’s definitely not the strongest performer in the film, and he still feels a little young in the part, but otherwise he serves his purpose without coming across unbelievably.

Godzilla is certainly one to see, featuring wonderful storytelling, a great creature design, true emotion, and another great turn by Bryan Cranston. If anything, you’ll just want more Godzilla.