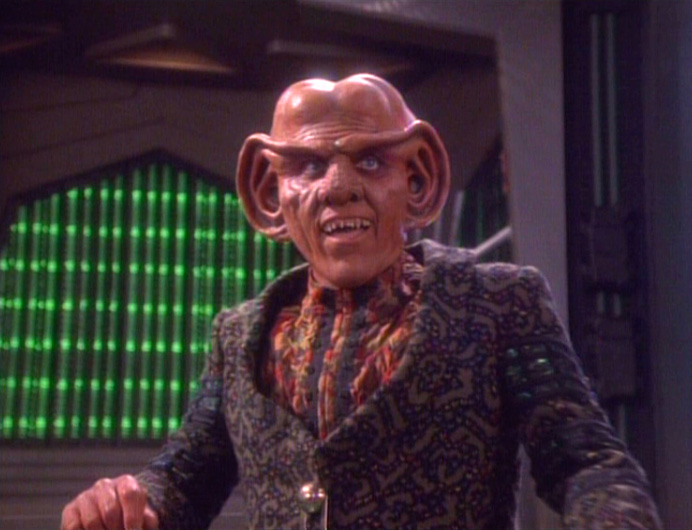 Four episodes into its existence, it’s time for Star Trek: Deep Space Nine to relax a little. “Babel” isn’t the sort of episode that’s going to provide deep insights into DS9’s metaplot. It’s something DS9 can do this early in its run since its renewal is assured, and particularly something it can do this week, as the week this aired was the same week The Next Generation was coming back from the miniature break it took in January 1993 while DS9 found its legs.

The episode doesn’t focus on developing one main character the way the previous three have; it shifts its focus around most of the ensemble instead, using the plot device of a virus that disrupts people’s language comprehension (before becoming more life-threatening in its later stages) to slowly remove each cast member and thus move the focus to those who remain. Chief O’Brien is featured heavily at first, in a way that leverages his role as the working-class crew member whose job is perhaps most relatable: all over the station there are stuck doors, malfunctioning computers, intolerable noises…and the boss’ coffee isn’t good enough. That O’Brien is patient zero for the aphasia virus is an obvious choice — not only to those who have seen the rest of the series, in which the trials and tribulations of Miles O’Brien are many and varied, but even to someone looking only at the episode in question. O’Brien is overworked and understaffed, and Colm Meaney does a great job portraying his good-natured exhaustion.

With O’Brien reduced to spouting the episode’s delightful gibberish (“Way link complete. Way link!”), the action moves to the rest of the ensemble: Bashir gets some meaty medical scenes as he discovers the nature of the virus and tries to create an antidote (showing a small bit of his character’s arrogance by wishing he could meet the genius who devised the virus even as the clock is ticking down to the virus’ terminal phase), Kira finds the device O’Brien accidentally triggered that inserted the virus into replicated food, Sisko manages the crisis as best he can, and Odo, of course, investigates Quark. (The only main character who doesn’t get much to do here is Dax, which continues to be a bit of a problem for the show, as the most development she’s gotten so far has come in discussing her friendship with Sisko and not wanting to date Bashir.) As the virus spreads to more of the station’s crew we see one more purpose for doing this particular episode: with so many of the station’s residents being placed in quarantine and only a couple of short scenes actually showing them quarantined, the production gets to save on extras, costuming, and makeup. “Babel” is a true bottle show, with virtually all of the action taking place on the standing station and runabout sets (the only exceptions to this are two guest stars who appear on viewscreens with one wall behind them) and in many of those scenes the sets are all but empty. Two brief glimpses of Quark’s bar packed with customers are contrasted with much longer scenes featuring two or three actors. There’s a long shot of the promenade, which we’re already used to seeing humming with activity, instead still and silent until the camera finds a lonely Jake Sisko. These views of the station are a bit unsettling even this early, in addition to being a solid way to make up some of the sprawling costs of “Emissary.”

As O’Brien’s story in “Babel” serves to exhibit some of the qualities of his character without necessarily developing in a meaningful way, so does Kira’s. When she finds the device planted in the station’s replicator system, she of course assumes that it’s the work of the Cardassians, only to be shown momentarily that it was a bit of sabotage by the Bajoran resistance, hoping to poison their Cardassian overlords. When Kira then finds that the person who created the virus is dead but his assistant is still alive, albeit unwilling to answer any questions, she once again shows her preference for efficiency over niceties and action over cajoling by kidnapping the assistant from his workplace on Bajor (the first time the show has returned to the planet, if only barely, since Sisko saw Kai Opaka in “Emissary”), exposing him to the virus, and taking him back to the station so he’ll have to work to save his own life as well. Kira is the blunt instrument who knows what she does and does not have time for, which still distinguishes her from the Starfleet characters. Her main role in the plot thus accomplished, Kira is free to succumb to aphasia as well.

Sisko’s character is still operating at a bit of a remove, as an administrator and a mediator for the other characters — questioning Kira’s initial assumption that the Cardassians must be responsible, for instance — except for some effective scenes with Jake after the boy is infected. Avery Brooks has always been clear about how important the relationship between Sisko and Jake was to him, not only as a parent himself but as someone deeply invested in undoing stereotypes about black fathers. The chemistry between Brooks and Cirroc Lofton seems to have come easily despite some flat line readings by Lofton (between the aphasia-borne gobbledygook in this episode and the Prophet scenes in “Emissary,” he’s had a tough road for a child actor), and the pair’s physical acting shows the warm, loving relationship between their characters. 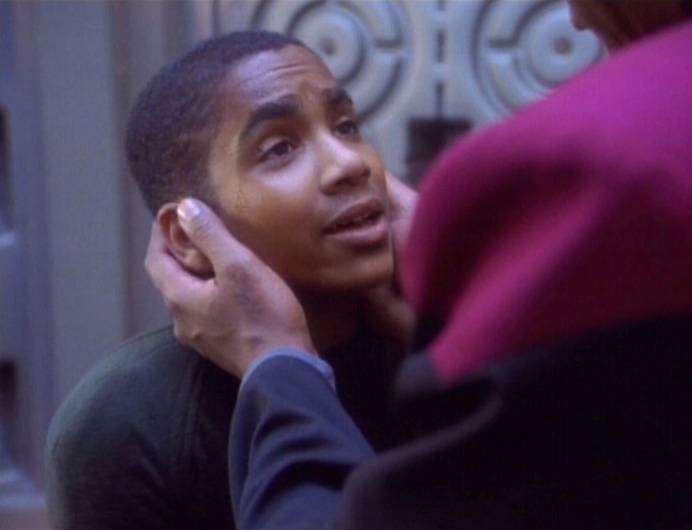 Odo and Quark are still joined at the hip in “Babel,” and still exploring their characters. When forced to work together in the station’s control center because they’re the only two people on the station who seem to be immune to the virus, Odo is unsettled and frantic at having to take control of a situation he’s not prepared for in a place he usually doesn’t work in, while Quark blithely waltzes in and does an admirable job pretending like he knows exactly what he’s doing. There’s a moment when Odo needs Quark to use the transporter to send him to the site of the obligatory “we’re getting toward the end of the episode, so there’s going to be an explosion soon” scenario; Quark confidently assures Odo that he served on a Ferengi ship for years before adding “I must have witnessed the procedure hundreds of times,” to complete the pair’s shift into a straight-up sitcom dynamic. Earlier, after a bit of gloating from Odo about a dip in Quark’s business, Quark gains access to secure files on the station computer by simply pulling out a drawer of isolinear rods, presumably with different illegitimately-gained security clearances, and selecting the proper one; it works fantastically as a small moment that shows just how much Quark is able to play the system when he wants to, and the casual way that he pulls out the drawer and selects the rod emphasizes the extent to which he’s operating under sitcom logic.

The premise of “Babel,” the virus that endangers the station’s denizens, had been kicking around the writers’ room on TNG for several years before being picked up for DS9, with the resulting teleplay being co-written by TNG staff writer Naren Shankar. While it’s easy to imagine a version of this episode on the older series, though, with Data being the most obvious choice for the last unaffected crew member, the added character quirks of the DS9 cast are what make the episode work, and what make it remain charming even in retrospect. Parts of DS9’s premise also provide the two main antagonists of the episode, such as they are, in ways that would not have worked on TNG. DS9 is nominally based on the political position of Bajor, coming out of a generation of occupation at the hands of the Cardassians, yet in two out of four episodes so far Bajoran terrorists have been the instigators of the risk to the main characters. While neither episode implies a collective critique of the Bajorans — “Past Prologue” indicted radicals who are useful for a time but don’t know when their fight is over, and “Babel” is a more direct allegory for land mines and other weapons of war that may be buried and forgotten — it’s nonetheless interesting that after establishing the Cardassians as the closest and most significant threat on the level of interstellar politics, Deep Space Nine not only holds off for quite some time before doing another Cardassian-heavy episode but proceeds to do two episodes in which Bajorans are the proximal threat. (Also, for a struggling guerrilla movement, the Bajorans had access to some advanced medical techniques and expertise: in “A Man Alone” Ibudan got access to advanced cloning technology fairly soon after being released from prison into a world still reeling from decades of atrocities, and in “Babel” we are told that a device made to insert a custom-made virus into replicated food was planted eighteen years earlier, in the midst of Cardassian rule.)

The other main cause of the danger in “Babel,” of course, is greed. While the device left by the Bajoran resistance releases the virus, it is Quark who uses a replicator he doesn’t legally have access to and recklessly spreads contaminated food to anyone willing to buy something from him, all because he’s experienced a business slump. While the true enemy here is the lack of proper regulation preventing capitalists from inflicting such abuses, the show doesn’t actually make this critique: Quark is a main cast member, and we can’t condemn those very vociferously; additionally, as one of the outside voices providing different perspectives on the human condition of the 24th century (and on us, since science fiction is always really about the present day), the show can’t dismiss his perspective so easily. Even when he appears in the makeshift sick ward, haranguing people who owe him money just in case they’re faking their illness to get out of paying their bar tabs, his behavior is treated as part of his shift into sitcom logic rather than as any serious form of harassment. It’s a fine line the show will walk with Quark for a long time. 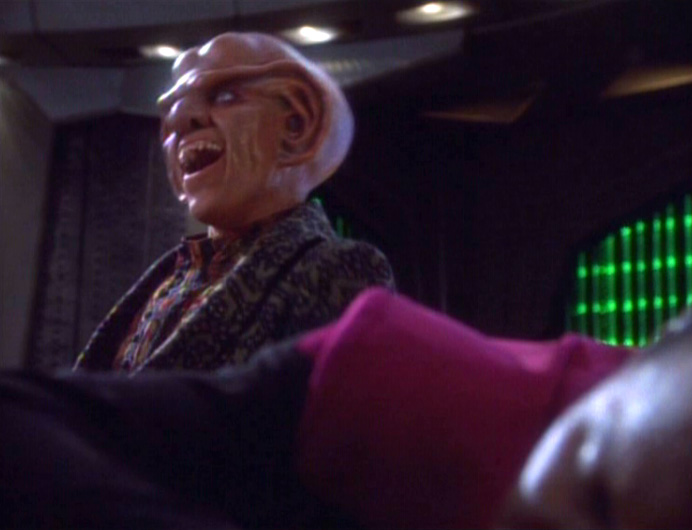