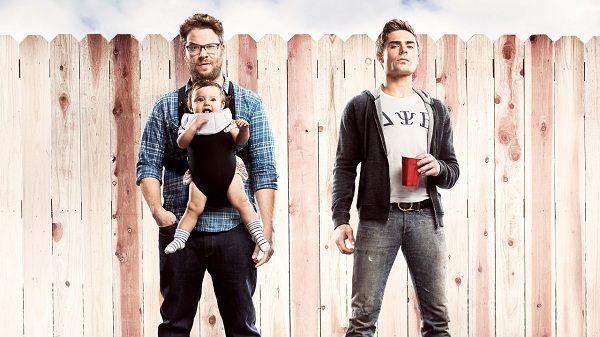 It’s undeniable that Seth Rogen has done exceptionally well for himself in Hollywood. I think it’s equally undeniable that, for all the guy’s comedic talents, his range as an actor is limited. How much you enjoy this movie may depend on what you think of Seth Rogen and his schtick. He hits all the usual Seth Rogen notes – frequent marijuana references, un-ironically quoting hip hop songs from the late 90’s/early 00’s, providing narration while making love to a woman far more attractive than him – but after seven years on the big stage, fatigue has set in (Yes, Knocked Up was that long ago).

The result for me was more of a pleasant diversion than anything hilarious. The notes are safe and predictable, and make for a fun afternoon watch. The surprise for me was that the movie strived to reach a higher level, which it occasionally achieved but ultimately failed to sustain.

The premise of Neighbors is simple. Joe Eighth Ounce, his beautiful Australian wife and their adorable baby girl move into their first home, situated in an idyllic neighborhood. Seth Rogen (it seems disingenuous to refer to him as anything else) and his wife Kelly, played by a fully game Rose Byrne, are former party kids adjusting to parenthood. They love their baby (and why wouldn’t they – the little princess doesn’t cry once over the course of the entire movie) but feel stifled by the burdens and responsibilities of their new roles. Kelly in particular sweats a subtle desperation urging her to get out of the house and LIVE a little.

This was a refreshing change-up to the usual comedic formula. Kelly isn’t reigning in her buffoonish husband’s bad tendencies. If anything, she’s less equipped for parenthood than he is. She’s a reformed party girl whose life changed so incrementally that she woke up one day not sure who she was or what to do with a baby. She loves the crap out of her kid, but that doesn’t make being a parent any less claustrophobic.

Oh yeah, and if that wasn’t enough for Seth Rogen and Kelly to deal with, they’re living next door to a frathouse.

The frat is headed by Teddy (Zac Efron , having a blast subverting his clean-cut image) and Pete (Dave Franco slaying everything he touches, going back to the hilarious 21 Jump Street). And these guys take their fraternizing seriously. In one of the film’s funniest scenes, Teddy – with the aid of some inspired cameos – gives his brothers a history lesson on how college staples like beer pong and toga parties originated with their fraternity.

Seth Rogen and Kelly are torn between their desire to appear cool and the need for a stable environment for their baby. After a promising start, propelled by a night of drug-fueled bonding, the neighbors run afoul of each other and spend the next hour doing horrible, mean-spirited things to each other.

I wanted to root for Seth Rogen and Kelly – because I’m at a point in life closer to a mortgage than a mid-term, because I hate loud neighbors and because the movie is telling me to – but here’s the thing. They’re as bad as the frat kids. And it doesn’t take much prodding to get them there. Hi-jinks ensue, but they’re less “over the top zany pranks” and more “wow that was discourteous and really dangerous.” If Seth Rogen and Kelly had been pushed until they snapped, I might have accepted it more easily. If the movie had gone full bore with their depravity – sort of a Bad Santa route – that might have worked too. As it is, they’re neither justified in their actions nor absurdly excessive in them. That made their schemes, which were supposed to be the film’s high points, fall a bit flat for me.

One area where the movie does excel is in depicting the true affection and loyalty these fraternity brothers have for one another.   It understands that being friends sometimes means testing the limits of acceptable behavior not in spite of your bond, but because of it. Over the course of the movie Teddy, Pete and co. throw fists, hook up with each other’s girlfriends and casually dunk their jewels in each other’s sleeping mouths. They also share difficult truths, take the fall for crimes and offer each other their secret stashes of Girls, season two.  The movie gets that you don’t rip out your brother’s pubes (just) because you’re a sociopath. You do it because there’s no other way to release him from the plaster cast covering his penis and testicles. And that’s family.

The film’s conflicts resolve themselves in the manner you’d expect. Final shots are fired, smoke clears and the characters have grown in certain ways. That’s not bad. That’s how it should be. The problem is that no force in the movie compels Seth Rogen and Kelly to reach the understanding they’ve achieved by the end. Their relationship was not threatened. Their baby, ostensibly the catalyst behind their transition to this next stage of life, was reduced to an adorable accessory. Never endangered or even involved, she’s an astonishingly silent symbol.

A movie is like high school algebra. It’s not enough to get the correct answer – you have to show your work so we can see the route you took to get there. Neighbors is a fun diversion with a few good ideas that don’t entirely come together, not unlike how I picture a smoke session with Seth Rogen. That doesn’t make it a bad movie. But it doesn’t make it a good one, either.