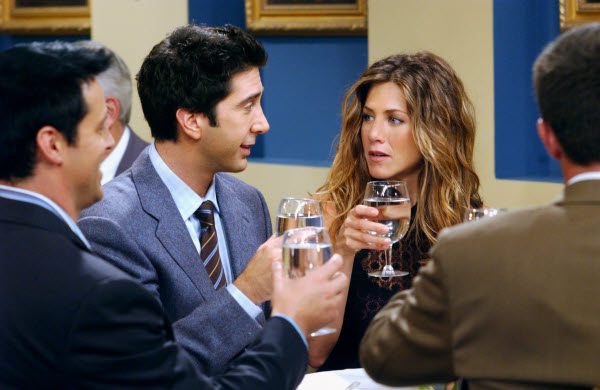 I stick by seasons 2 – 4 being my absolute faves of the series, but I do have a special place in my heart for the latter seasons – I think because of the point I was at in my life, just out of high school through early college years, and through all that change, Friends was something familiar and comfortable. I loved those characters like I loved my favorite pair of grey sweatpants. Yes, I had more than one pair.

In a nutshell, this episode is about Phoebe trying to celebrate her birthday by having a nice dinner with her dearest friends, but everybody is late to the dinner because they are too caught up in their own lives – well, everybody but Joey, because come on? Like Joey would ever be late too something revolving around food.

The storylines are split pretty evenly amongst each pairing dealing with their own set of problems.

Chandler comes back into town from Tulsa, wreaking of cigarettes, because he couldn’t resist the temptation in his new smoke friendly work environment. Monica notices the stench immediately, and an argument ensues. Though Monica is furious with Chandler, they are trying to get pregnant and it is the last day she is ovulating, so she pretends to forgive him and tricks him into sleeping with her. After the deed is done and the truth is revealed, Chandler is hurt and angry, and feels so used!

Across the street, Rachel is freaking out about leaving baby Emma alone for the very first time. Ross does his best to convince her things will be OK, but when he manages to lock them both out of the apartment before Judy gets there to babysit, literally leaving Emma all alone, Rachel’s fear and paranoia get the best of her.

Meanwhile, all Phoebe wanted was a dinner with her besties, and instead she and the starving Joey are having to fight to hold a table for six. With increasing pressure to move to a smaller table from an unpleasant waitstaff on a busy night, Phoebe finally caves, and she and Joey are moved to a table for two.

When Joey is just about ready to start nawing on the tablecloth for sustenance, Phoebe decides no one else is coming and she and Joey should just order. Before the waiter can get the order, however, that is when Ross and Rachel show up, shortly followed by Monica and Chandler. When all of her friends finally arrive, grumpy and/or distracted, and all the orders are placed, Phoebe is kind of over the whole birthday dinner thing. She vents her frustrations, gets a call from Mike, and decides to ditch the dinner to see him. The rest of the friends follow suit, except for Joey, who gets to finally eat…six entrees.

My favorite exchange in the episode happens between Ross and Rachel when they lock themselves out of the apartment and Emma is locked inside.

Ross: A pigeon, a pigeon. No, no wait, no, no, an eagle flew in. Landed on the stove and caught fire. The baby, seeing this, jumps across the apartment to the mighty bird’s aid. The eagle, however, misconstrues it as an act of aggression and grabs the baby in its talons. Meanwhile the faucet fills the apartment with water. Baby and bird still ablaze are locked in a death grip, swirling around in the whirlpool that fills the apartment.

Rachel: If that happens now, you’re going to feel SO bad.