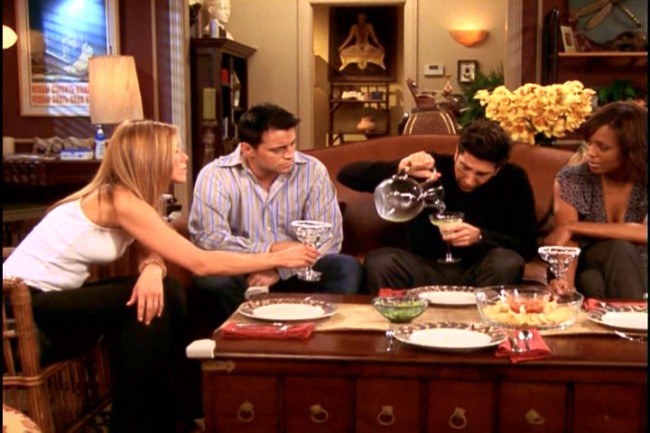 I never wanted Friends to end. I knew it had to. It was time. But it still sucked when it was over. It’s like when you read a really great book, and then you get to the end, and it’s satisfying that you finished it, and there is usually at least some sense of closure, but you’re still wondering what your favorite characters would be doing today, and you miss them. So, there may never again be a new episode of Friends, but there will be easier ways to watch the old ones. Starting January 1, all 236 episodes of the series will be available on Netflix, and to me, that is just great. I mean, isn’t it just kick-you-in-the-crotch, spit-on-your-neck fantastic?

So, here we are in season 10, at the very beginning, when the writers were still playing around with that mostly confusing (even though I did sometimes actually kind of love it – Ross can be really whiny!) Joey and Rachel coupling thing. This episode opens where the last episode left off. Ross witnesses Rachel and Joey kissing in their apartment. Ross’s reaction to the idea of Joey and Rachel is probably very similar to that of many loyal fans: Shock, mixed with disbelief, peppered with disgust, and slathered in more shock.

Obviously, storyline A focuses on Ross being ‘fine’ with Rachel and Joey dating. He is so fine with it in fact, that he suggests a super awkward double date with the couple and his new girlfriend (Joey’s ex-girlfriend), Charlie. Ross plans on making fajitas and margaritas for the evening. He gets sloppy drunk and borderline psychotic whilst still trying to convince Joey, Rachel, and his girlfriend Charlie, that he is totally fine. Charlie bails early on the uncomfortable evening, with Rachel following not far behind, while Joey decides to stay the night with Ross. The next morning, Joey tells a hungover Ross that he intends to call things off with Rachel, because he realizes now, the relationship would be too painful for Ross. Ross feels terrible for his childish reaction, and just wants his friends to be happy, so though it will take some getting used to, he genuinely gives Joey his blessing to date Rachel.

Here are my favorite crazy Ross lines from this episode:

Ross: “Absolutely. (Very Squeaky.) I’m fine! Totally fine. I don’t know why it’s coming out all loud and squeaky, ’cause really, (deep voice) I’m fine. I’m not saying I wasn’t a little surprised to see you guys kissing. I mean, at first I was like.. (Screams.) But now that I’ve had time to absorb it; Lovin’ this.”

Storyline B deals with Monica and Chandler feeling a little overwhelmed by the whole adoption process, so Phoebe refers them to a couple of her friends who adopted a son and may be able to help them sort things out. Unfortunately, before they learn any helpful info, Chandler pulls a Chandler and accidentally tells the unassuming boy that he was adopted.

Storyline C involves Frank Jr. confiding in Phoebe that he needs a break from the triplets.

The best part of B and C are probably when they join together and Chandler unintentionally reveals to the triplets that Phoebe is the one who birthed them. He then says he is going to go find Emma and tell her she was an accident. Oh Chandler.