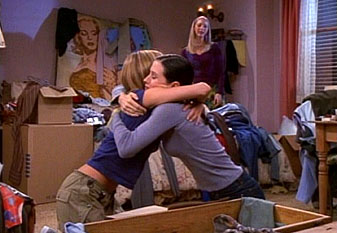 Season 6 is actually much better than I remembered, and it was quite difficult to pick a favorite episode. For most seasons, I have a clear favorite, but it seems I have a top five for this season, with alternating favorites depending on my mood. I’m currently feeling “The One on the Last Night”, but “The One Where Ross Got High”, “The One with the Routine”, “The One That Could Have Been” and “The One with the Ring” are all pretty terrific.

During season 6, Ross endures his third divorce, Chandler moves into Monica’s apartment, which leads to Rachel moving in with Phoebe, and Joey falls for his new Australian dancer roommate. By season’s end, Rachel and Joey are roommates and Chandler and Monica get engaged.

“The One on the Last Night” is the episode where it is Rachel’s last night living with Monica and Chandler’s last night living with Joey. Rachel’s procrastination in packing decides how the girls will be spending their last night together, and Chandler spends the evening trying to give Joey $1500 because he is concerned that Joey will not be able to take care of himself financially once Chandler moves out, but he also knows Joey is too proud to just take the money, so the night is spent gambling/making up games in which Chandler can essentially ‘lose’ his money to Joey. Phoebe is roped into helping Rachel and Monica pack, but Ross uses Ben as an excuse to not be involved with the packing. Monica makes it clear that she can see into Ross’s apartment, so she’ll know if he’s lying, and Ross acts insulted by what Monica is insinuating, and then utters under his breath to Chandler and Joey as he exits Monica’s apartment, “I gotta go make a fake Ben” – which is probably my favorite stand alone line of the episode.

The absolute best part of this episode though, and what really makes it shine, is Monica and Rachel coming to grips with ending a really big chapter in their lives. The packing party starts out all sappy and sentimental, with Monica and Rachel crying over each item they wrap up, and then Phoebe tries to lighten the mood, and balance out all the sadness by getting Monica and Rachel to confess one thing they won’t miss about being roommates, which quickly escalates into an all out brawl about every flaw each girl has, which is both hilarious and heart-wrenching, because you know they are just acting out, and they really are crushed to not be living together anymore. Phoebe eventually and slyly gets the girls to calm down, break down, and move on.

This is one of those episodes that doesn’t necessarily have a superstar one-liner, but definitely has an epic dialogue battle between Rachel and Monica.