Skip to content
Nostalgia The Best of PTBN Wrestling
Staff

WWF Superstars. October 30, 1993. Over twenty years ago now, but that date sticks out in the mind of this wrestling nerd. And like so many of my most vivid wrestling memories, this particular incident occurred inside the Worcester Centrum.

Since arriving on World Wrestling Federation television in early 1992, Tatanka had remained undefeated to viewers at home. By late 1993, that streak remained in tact and just simply became part of his character: this Native American warrior with a heart of steel never lost a match. Hell, most of the time he was referred to as “The undefeated Native American Tatanka” by announcers. Oddly, he never advanced much past a handful of Intercontinental title shots that had come about a year into his run. For a competitor that could boast zero blemishes on his record, he was devoid of World title matches, but here he stood, undefeated for 21 months and naked around the waist. Inside the Centrum, Tatanka was looking to pick up one more big win in preparation for the next WWF pay-per-view offering, Survivor Series. He was all set to defend America by teaming with Lex Luger and the Steiner Brothers against a team of Foreign Fanatics led by WWF Champion Yokozuna in a traditional elimination match. It was a Thanksgiving tradition: America, turkey and Survivor Series. Looking through Tatanka’s PPV catalog, you could argue this was his biggest bout to date as the match was the nominal main event and expected to close out the show. 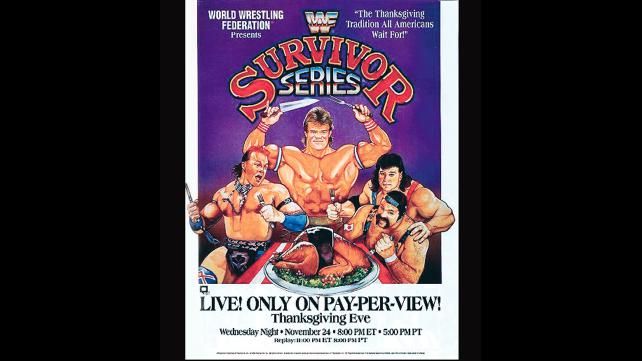 The man who stood across from Tatanka on this particular episode of Superstars was newly minted heel and hater of all things American, Ludvig Borga. Hailing from Finland, Borga burst onto the scene in late July, smashing jobbers and ranting about what a garbage pit the United States had become. He mocked the pollution of the Land of Milk & Honey (“It just smells funny”) and bragged about how splendid his home country was. Borga made it quite clear: the Finns were a proud people, and they felt they were clearly superior to us filthy Americans, the scum that wrecked nature’s beauty out of the selfish need to clean our homes. He also made sure we knew that this country was being signed away welfare check by welfare check thanks to the increasing number of high school dropouts.

Maybe this dude was way ahead of his time?

Regardless, his words hung heavy like the thick smog he despised as Borga immediately made it known that he had one target in the WWF: Lex Luger.

After spending his first six months in the promotion as the arrogant heel Narcissist, Lex Luger eschewed that image in one fell swoop on the Fourth of July. On that day, the evil Yokozuna and Mr. Fuji were trying to besmirch America on its birthday, issuing an open bodyslam challenge aboard the USS Intrepid, a retired warship that called the shores of New York City its permanent home. After nearly a dozen wrestlers and athletes (Scott Burrell FTW!) failed in their attempts to slam the massive champion, a helicopter cut through the thick, humid air and landed on the ship’s runway. As many expected a returning Hulk Hogan looking for revenge from his King of the Ring loss, Luger defiantly hopped out, clad in an American flag shirt that would even make Ron Swanson blush. He stomped to the ring and slammed Yoko to the mat, putting his name into the record books alongside George Washington, Teddy Roosevelt and Norman Schwarzkopf as true defenders of American freedom. With that slam heard around the world, Luger became the top face in the company and demanded a World Title match for SummerSlam but was denied by Yoko’s American Spokesperson Jim Cornette. In an effort to obtain his match, Luger boarded the infamous Lex Express bus and navigated around the country, drumming up support. The campaign worked and President Jack Tunney granted Lex his SummerSlam shot.

SummerSlam came and went and not much changed with the WWF landscape. Luger won the match by count-out, meaning the title remained with Yoko. Despite Luger celebrating like just knocked out Ivan Drago and ended Communism, the evil foreign kingpin still reigned atop the WWF. Tensions rose higher as Borga debuted and looked unbeatable, running through Marty Jannetty like a knife through coked-out butter on the same night Luger had failed to eradicate the threat to Homeland Security. Things got even bleaker when the Canadian born Quebecers outsmarted the apple pie-eating, varsity jacket-wearing Steiner Brothers for the WWF Tag Team championship on the September 13 episode of Raw. Tunney saw where things were headed, so he set up a big time showdown to pit the warring sides against each other at Survivor Series. What better forum was there for the Americans to spread jingoism and beat back the foreign fanatics than the annual Thanksgiving tradition? Luger and the Steiners were no brainers for the squad and Tatanka was added to round out the team. A Native American defending the country on the anniversary of his people first making peace with the pilgrims? It made all the sense in the world (wrestling federation).

However, while the All Americans were prepping, the Foreign Fanatics were plotting. And that plot came to fruition in Worcester. To help set up the PPV, Tatanka and Borga would battle. Both men were undefeated, so the stakes were high, rare for a Superstars match. The match was a war, as expected, with ten minutes of brawling in and out of the ring and the fans were anxious to see if Team America could gain any sort of momentum ahead of Survivor Series. They would be disappointed. Playing off the unity of the Fanatics, Mr. Fuji had accompanied Borga to ringside and he played a major role during the home stretch. As Fuji distracted the referee, Borga dumped Tatanka to the floor and flattened him with a steel chair. Borga then rolled the limp Buffalo into the ring, knelt down and arrogantly pinned him with his pinky. He may as well have pulled down his black unitard and pissed on a turkey draped in an American flag. The fans were crushed. After 21 months of invincibility, Tatanka had fallen to this maniacal Finnish environmentalist. Adding insult to injury, Yokozuna ambled to ringside and assisted Borga in brutalizing the unconscious Native American. As Yoko dropped Banzai Splash after Banzai Splash, the perplexed group of Luger and the Steiners were trying to bust through a chained door backstage. They finally figured out the riddle and charged to ringside to make the save, but the damage had been done. Tatanka had not only lost, he was hurt. Seriously hurt. And Survivor Series now looked bleak.

Borga and the Fanatics bragged and strutted, proud of the damage they had unleashed and assumed they would now have a man advantage come the PPV. Their confidence took a hit when Luger and the Steiners were shockingly approached by the Undertaker, who wanted in on the action. While the Deadman wanted to defend the country that allowed him to freely reap souls and lock wrestlers in caskets, he also had his zombified eyes zeroed in on the World Title carried by Yokozuna. In a moment that truly defined the unity and pride of the United States, Taker opened his robe to reveal a gorgeous American flag emblazoned on the inside. The All Americans were again whole and were now focused on revenge. 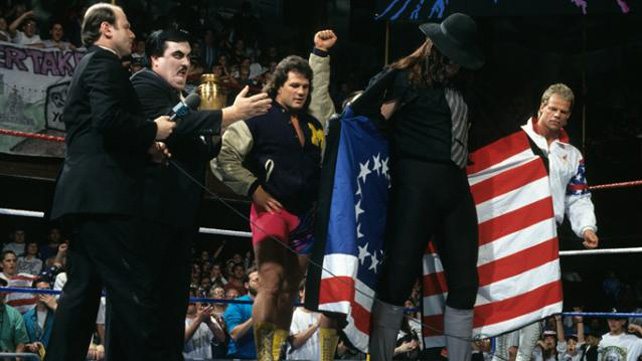 A taste of that revenge came on the 11/15 Raw when Luger used the steel plate in his arm to cold-cock Quebecer Pierre, leaving him in a dizzy heap on the mat. Proving he was ahead of the Roger Goodell curve by a good 20 years, Jack Tunney ruled that Pierre would not be healthy enough to compete at the PPV and allowed the Fanatics to choose a replacement. They would select Mr. Fuji’s newest charge, Crush, a man so disenfranchised with Randy Savage and America that he had defected to the dark side, denouncing his country along the way.

Finally, after weeks and weeks of build and angst, the big night in Boston had arrived. With eight brawlers in the mix, the heavy bombs were tossed early and often. Five minutes in, Rick Steiner was eliminated at the hands of Borga but the All Americans got an assist from Savage to eliminate Crush and even the odds back up. At the fourteen minute mark, the All Americans gained the advantage for the first time since this whole feud kicked off when Luger pinned Quebecer Jacques. The match was again evened up just two minutes later when Yoko wiped out Scott Steiner. At 22 minutes, Yokozuna and Undertaker tumbled to the floor and battled to a double count-out, officially pushing their burgeoning World Title feud into overdrive. And thus, as we all expected, the match, and the fate of America, rested on the bulging shoulders of Lex Luger as he would be forced to run through the man who had been calling him out at every turn: The undefeated Finnish wrecking ball, Borga. After six minutes of hate-fueled passionate tussling, Luger was able to catch Borga with his loaded forearm, temporarily knocking him silly and allowing Luger to get the win. America had been saved. The Fanatics had fallen. And Borga was indeed mortal. With Thanksgiving officially in the books (kind of), the true embodiment of gluttony, freedom, milk and honey appeared to celebrate with Luger – Santa Claus. 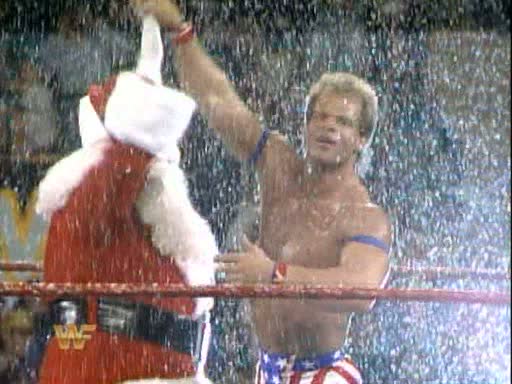 Luger and Borga would continue to battle all around the country, but once Borga was cut, the luster begin to fade through. There were clear chinks in the armor that Luger was able to expose, ensuring the safety of Americans and protecting the WWF from the green menace as 1993 came to a close. As January dawned and Luger looked to set his sights back on Yoko’s title, the reeling Borga now had another issue to deal with: Tatanka was back. And pissed off.

The two were set to square off at January’s Royal Rumble in Providence, RI, a fitting setting for what should be a heated affair. Both men now had blemishes on their records, but after the brutal assault in October, this match still carried a lot of weight. Sadly, it was never meant to be. On January 17, just days before the Rumble, Borga hurt his ankle. The injury was serious enough to take Borga off the card and out of the match. Karma had come full circle. As the weeks went on, the news wire was silent. In late February, it was announced that Borga was finally on his way back and would battle Earthquake at WrestleMania, but it was a false alarm. The ankle was still busted and Borga wouldn’t make it back in time. In fact, he was never seen on WWF TV again. At the end of the day, Tatanka and the USA had prevailed. Borga had been vanquished once and for all. The polluted rivers of Everytown, USA could continue to flow without fear of ridicule from judgmental immigrants. Love it or leave it, hater. 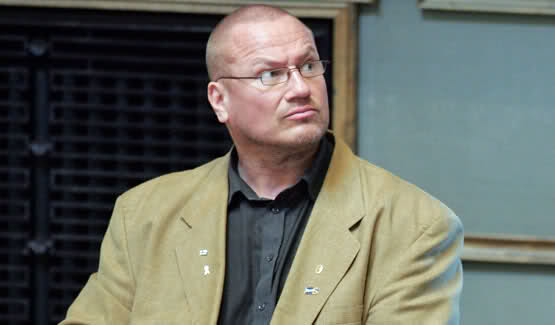 It has been twenty years now, but the epic showdown between Borga and Tatanka is one that won’t soon be forgotten. It symbolized the battle we face every day as Americans and the importance of standing strong in the face of those that want to deride the freedom heroes like Lex Luger and Tatanka battled for night after night, town after town, arena after arena. Somewhere in Finland, Borga drives around in his Prius, plotting his return and sorting recyclables. Until then, we must promise to stay vigilant. It’s the least we can do.