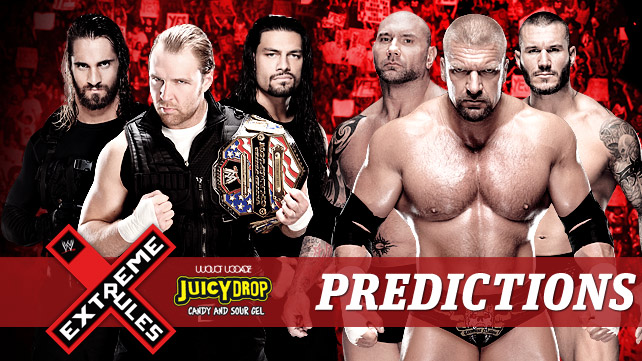 Extreme Rules is upon us, the epilogue to the WrestleMania storylines. We have one rematch and we have one match that continues another storyline and some other fresh match-ups. Yours truly will be live at the IZOD Center for the show. I am most certainly looking forward to hearing Evolution’s theme for the first time in over ten years. Well enough of my hopes and dreams. Let’s get into the card. We begin with one pre-show match that I’m NOT looking forward to but may end up looking like an entertaining enough match.

This is exactly where this match belongs and that’s not an insult. The feud has been brewing on Raw over the past few weeks and heck why not entertain the crowd before the show with some comedy. Sure El Torito has a great background in Mexico and will probably make this a fun match. Hornswoggle was always serviceable and he probably will be here. There’s really not much more to say here. SCOTT’S PICK: El Torito

Now time for the show itself:

A lot of people I know were stunned that Cesaro didn’t win that #1 contenders tournament (he will be on the card though). Barrett is just as good a choice as he is a former 3-time IC Champ. Big E has been horribly misused since he won the title. He had some fairly solid title defenses but since then hasn’t really been on camera that much. I don’t like that he was just tossed into the battle royal at WrestleMania instead of actually defending the title, but I would be naïve to think the IC title actually means something to the bookers. In any event Big E has lost a lot of his mojo because of the lack of use and because to be honest he doesn’t cut a great babyface promo. He needs to show some more of his comedy and less of the serious stuff. It doesn’t work. I’m going to go with the minority of people and think that Big E will get some mojo back and retain his championship. Barrett is in good shape right now, he can absorb a loss here. Big E actually needs it more. SCOTT’S PICK: Big E

I really don’t understand the booking here. Rob Van Dam is a decorated champion and a fun guy to watch in the ring, but why shoehorn him into this match? This can be the final blow-off for the former Real Americans and then Cesaro can move on from this and reach some greener pasture. Instead because of the shenanigans pertaining to the #1 contenders tournament, RVD gets put in here as well. If it’s to make sure that there’s a babyface in the match that’s a terrible reason. Cesaro will get face pops because he’s popular regardless of what side he’s on. The match will be fun even though I don’t really know what the match is for other than to showcase Cesaro. Cesaro finishes both guys off and moves on to something better. SCOTT’S PICK: Cesaro

This is a great opportunity to see the massive Bulgarian take out a couple of guys who used to have some sizzle but no longer. I love Rusev (and I definitely love his valet Lana). Rusev is one of those guys that you know Vince loves and will push to the moon if the opportunity was there. This one could last a few minutes but there is only one choice here. SCOTT’S PICK: Alexander Rusev

Paige is the (now former) NXT Divas Champion and does have the goods to be a great champion, but her early TV matches have been ok, but not stellar. This is a great opportunity against someone with a little bit of ability (unlike talent-less ones like Aksana) to give Paige some experience. I don’t see this match being longer than five or six minutes but Paige needs to shine on this stage or else she won’t be around, or sent back to NXT. She was very good on NXT against opponents better than who she’s faced so far in WWE (except AJ) and it seems she has struggled at times. She’s going to win here, but the real issue is whether the match will be watchable or will Paige have another strike against her. SCOTT’S PICK: Paige

Well, where is this really going to go? After Cena’s somewhat shocking win at WrestleMania, we get the expected rematch. It would seem like Bray would get the win back and continue this very intriguing feud, but then again when it comes to John Cena can we ever really predict anything? Nobody thought he was going to beat Brock Lesnar two years ago at this PPV. Besides, if they decide to end this feud Sunday night then its clear Cena wins. However for a guy with such staying power and heel heat like Bray Wyatt, why throw four months of good promos away so that Cena can win both matches and end it? Cena’s not involved in the title storylines, nor is he involved in anything with the Authority, so why have him end this feud and be in limbo? I can see Cena taking a pretty big beating and leaving for a while, maybe setting up a third match at SummerSlam. Cena took that quickie break in the fall to sell that elbow surgery. To make a long story short, I have no idea what to expect here. I will go with the equalizing win for the Wyatt Family and maybe we see a tiebreaker at either Payback or SummerSlam if Cena gets taken out. SCOTT’S PICK: Bray Wyatt

EVOLUTION vs. THE SHIELD

I honestly don’t understand how this match has no stipulation or gimmick attached to it. Not that it really needs it per se, but some weapons wouldn’t hurt. I was very excited to see the 2000’s best faction back together, if only for a brief period. Honestly Randy Orton and Batista aren’t doing anything at the moment. You aren’t going to waste either Orton’s title rematch or a Batista solo title match on an “in-between” PPV. This is a huge match for the Shield as it’s their second as clear babyfaces. I know people want to see them in a long term program as a unit, but I honestly don’t see them staying together past July. Whether they just split or someone turns on them and leaves will depend on the writers. I do think Roman Reigns still needs some time with them to really grow in the fans’ eyes before he goes solo. Ambrose is probably the one who can go solo now, but that’s because he’s an awesome heel and he’s still US Champion. The match may end the show but I’m not sure on that either. It probably will, either that or the cage match. Evolution isn’t going to lose just three weeks after reforming. It will be a fun match that could be the longest of the night, and Orton RKO’s Rollins for the win. SCOTT’S PICK: Evolution

I put this match last on the list because I’m old school and the title match should always be last. I don’t think that will be the case here. Clearly with everything that’s gone on with Daniel Bryan since his epic night in New Orleans (got married, death of his father), so restarting a new title feud would have been a waste of time since Bryan wasn’t around much. So keeping the Authority storyline going was the safest thing to do. Kane is a safe opponent and with the gimmick attached that will bring some violence and entertainment to what seems to be a tired out feud. These two have battled at least seven times since the turn of the year and I know that’s a bone of contention with some. It’s just “good for business” right now. Then with Payback not till June 1, that gives plenty of time to ignite something different. Bryan will get a chance to maybe face different opponents since both Orton and Batista are locked into other business. Bryan retains the title here, its just a question of whether it ends the show. SCOTT’S PICK: Daniel Bryan