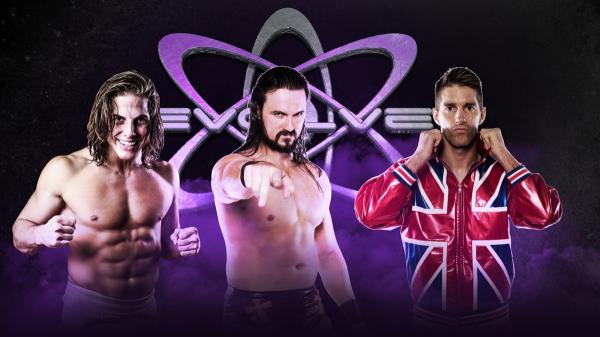 It is announced at the beginning of the show that the main event I Quit match between Matt Riddle and Drew Galloway will now be for Riddle’s WWN Title. It is noted that it is Galloway’s last match before going to NXT.

It is noted on commentary that after last night’s match with Page vs Darby Allin that Allin is now on the injured reserve list. It is also noted that Theory came out to help Allin last night. Page comes out with his Gatekeeper (Blaster McMassive). Page kicks Theory in the face to start. Page runs him into the corner and hits him with a chop and an elbow. Page whips Theory across the ring but Theory jumps to the apron and kicks Blaster. Page charges and spills to the floor where Theory hits he and Blaster with a quebrada. Theory beats Page around the ring but Page boots him in the face on the apron. Page gives Theory a draping backbreaker. Priscilla Kelly comes to ringside. Page hits Theory with a back elbow and a kneedrop. Theory fights back with punches but Page rams his shoulder into Theory’s gut in the corner. Theory hits a forearm smash and a dropkick. Theory throws a knee-strike and an enzuiguri. Theory runs Page’s head into the corner. Page charges Theory and takes a boot to the face. Page strikes back and gives Theory an iconoclasm. Page works over Theory and chokes him on the ropes. Page applies a chinlock but Theory fights out with elbows. Page goes for a uranage but Theory escapes and hits clotheslines and a standing moonsault. Page hits several elbows on Theory who fights back with a discus elbow. Theory does a running shooting star press. Theory does a forward roll in an attempt at offence but Page catches him and gives him a Spinning Dwayne for the pinfall. Priscilla Kelly attends to Theory after the match.

Jaka takes the mic and says he likes money and competition and asks ACH to come to the ring for their match now.

They tie up and Jaka takes ACH down in a hammerlock. They trade wristlocks and roll-up attempts. Jaka slaps ACH in the back and misses a kick. ACH continues with roll-ups. They trade strikes in the corner. ACH gives Jaka an inverted atomic drop. ACH sweeps the leg and double stomps Jaka’s back. ACH snapmares Jaka and gives him fistdrops. They trade elbows and ACH gives Jaka a rolling neckbreaker. Jaka chops and headbutts ACH. Jaka elbows ACH in the head and they trade more chops. Jaka goes for a suplex but ACH elbows him in the head. ACH gives him a low blow. ACH does a hurracanrana. ACH charges Jaka who gets a boot up and hits a cannonball in the corner. Jaka gives ACH an exploder suplex. Jaka drops an elbow and puts ACH in a surfboard. ACH flips backward with a dropkick and they trade chops in the corner. ACH heel-kicks Jaka in the gut and does more chops. Jaka kicks ACH and suplexes him. Jaka gives ACH a German Suplex. Jaka keeps on ACH with chops and punches in the corner. Jaka goes for another cannonball but ACH backdrops him to the apron. ACH kicks him to the floor but Jaka gets back up. ACH kicks him to the floor again and hits a springboard dropkick on the apron. ACH goes to the apron and hits a soccer kick. ACH rolls Jaka inside and gives him a springboard uranage. ACH comes off the top with a codebreaker. ACH goes to the top again but misses a double stomp. Jaka headbutts ACH in the chest but ACH dropkicks him. Jaka hits a spinning forearm, a wheel-kick and a tiger bomb for the pinfall. Hathaway comes out and celebrates with Jaka, Dickinson and Williams.

Starr pesters Lee with chops to start. Lee catches his hand on another attempt. Starr hits the rope and gives Lee a back elbow. Starr superkicks Lee out of the ring. Starr goes for a dive but Lee gets out of the way and super-bombs Starr on the apron. Lee follows Starr inside and beats him down with punches. Starr fires back with chops but Lee gives him a bigger chop. Lee forearms Starr in the back and whips him into the corner. Lee misses a charge and Starr continues with chops and forearms. Lee goes for a pop-up powerbomb but Starr floats over and then backdrops Lee into the corner. Starr goes for a suplex and headbutts Lee in the back. Lee blocks the suplex attempt and headbutts Starr in the chest. Starr throws elbows but Lee gives him a flapjack. Lee picks up Starr and taunts him but Starr slaps him in the face. Lee throws punches but Starr avoids it and works his way around Lee until giving him a DDT on the apron. Starr gives Lee a lariat. Lee grabs Starr in a super-bomb attempt but Starr counters into a sunset flip. Starr attempts a German Suplex but Lee powers out. Lee criss-crosses and gives Starr a flying headscissors. Lee slaps Starr in the corner. Lee gives Starr a jackhammer and gets the pin.

They shake hands to start. Rush goes for Sabre’s leg but Sabre controls him. Rush goes for a wristlock but Sabre controls him with headlocks. Sabre ties up Rush’s leg and Rush grabs the wristlock. Sabre grabs a cravate but Rush moves into an armbar. Sabre continues with head control and they break. They circle each other and Rush tries for a legsweep. Sabre grabs a wristlock but Rush grabs a takedown. Sabre hits an uppercut. Sabre misses a clothesline and Rush hits an enzuiguri. Sabre attempts a suplex but ends up bodyslamming Rush. Sabre grabs an ankle lock but Rush gets the ropes. Sabre hits an uppercut and kicks Rush in the head. Sabre twists Rush’s ankle and applies a chinlock. Sabre kicks him in the leg. Sabre hits uppercuts against the ropes and kicks Rush in the thigh. Sabre goes after the ankle and gets rush in a leglock and twists his arm into a hammerlock. Sabre applies a crossface and Rush rolls him into the ropes. Rush throws a forearm and kicks Sabre in the leg. They trade strikes and Sabre kicks Rush on the mat. Sabre grabs ankle lock again. Rush grabs a headlock and punches his way out. Sabre kicks him in the chest but Rush throws forearm. Sabre hits an uppercut and they criss-cross with Sabre getting him in an octopus. Sabre applies a full nelson but Rush elbows out. Rush goes for a Pele kick but Sabre catches him and gets him in an ankle lock. Sabre steps on Rush’s ankles. Rush throws forearms but Sabre hits an uppercut. Rush hits another forearm but Sabre hits more uppercuts. Rush knocks Sabre out of the ring with a koppu kick. Rush hits a dropkick to Sabre on the floor and gives him a tope suicida. Rush goes for a frog splash in the ring and Sabre hits an uppercut. Sabre misses a punt and rush gives him a reverse hurracanrana and a tilt-a-whirl DDT. Rush goes to the top but Sabre knocks him down with a leg-kick. Sabre goes after the wrist but Rush headbutts him. Rush hits a head-kick and goes for a frog splash again but Sabre catches him in a triangle. Rush rolls him up but Sabre gets out and gives him a dragon suplex. Rush misses a moonsault and Sabre punts him three times. Sabre hits an uppercut in the corner but Rush gives him a standing Spanish Fly. Rush hits a frog splash for a near-fall. Rush kicks Sabre in the chest twice. He tries a third time but Sabre catches his leg. They trade slaps, forearms and uppercuts. Sabre misses a legsweep and Rush slaps him and hits a back-kick. Rush misses another kick and Sabre rolls him up for the pinfall. This was another great match that was probably the second best match of the weekend, either this or Lee vs O’Reilly.

Ethan Page comes out and talks about Sabre taking out his other Gatekeeper (Flex Rumblecrunch) last night. Page says he can find another Gatekeeper like that. And with that another large man hits the ring and attacks Sabre. Page grabs the Evolve title and taunts Sabre with it. I found out from Twitter that the new Gatekeeper is Nick Comoroto who comes out of The Monster Factory.

They trade punches to start and Galloway rolls out of the ring. Riddle follows and takes a boot to the gut. They trade chops on the floor and Galloway rams his head into the apron. Riddle chops Galloway against the guardrail. Riddle tries to pick Galloway up on his shoulders but gets shoved head-first into the ringpost. They’re back inside and Galloway stomps on Riddle. Galloway sets up a chair and gives Galloway a tilt-a-whirl onto the chair. Galloway grabs a chair but Riddle hits him with forearms and kicks. Riddle gives Galloway an exploder suplex. Riddle lays a chair on Galloway and gives him a senton on the chair followed by a chair-free senton. Riddle kicks Galloway in the chest. Riddle goes for an up-kick but takes a boot to the face. Galloway tangles Riddle in the turnbuckle and applies a chinlock. Galloway chops Riddle on the floor and slingshots him into the metal bottom of the ring apron. Galloway lifts up the ringside mat and goes for a suplex but Riddle reverses into a vertical suplex. The commentators note that Stokely Hathaway are at ringside. Galloway gives Riddle a death valley driver on the apron. They return to the ring and Galloway gives Riddle two release belly-to-belly suplexes. They trade chops and forearms. Galloway gives Riddle a snap piledriver. Galloway sits Riddle on the top rope and chops him. Galloway goes for a superplex but Riddle stops him with forearms and hangs him in the tree of woe. Galloway sits up and gives Riddle an overhead release belly-to-belly suplex. Galloway charges Riddle but Riddle gives him the Bro 2 Sleep. Riddle applies the Bromission and the referee asks Galloway if he quits. Galloway grabs the microphone and hits riddle in the head with it. Galloway gives Riddle three Future Shock DDT’s. Galloway lays a chair in the ring and gives Riddle a Future Shock DDT on the chair. Galloway rolls outside. Riddle goes after him but gets punched. Galloway grabs a rope from under the ring and ties up Riddles arms behind his back in the ropes. Galloway punches away at Riddle and tells the referee to ask Riddle if he quits which he does not. Galloway yells at the referee then returns to Riddle who kicks him in the head. The referee then unties Riddle who hits flying kicks to Galloway’s head. Riddle gives him a fisherman bomb and then stomps his chest. Riddle grabs Galloway in a triangle choke but Galloway picks up Riddle and gives him a sit-out bomb. Galloway grabs a sledgehammer from under the ring. Galloway returns to the ring, headbutts Riddle and gives him a low-blow with the handle of the sledgehammer. The referee berates the official to ask Riddle if he quits. Riddle grabs Galloway in the Bromission and ties up his arms. Galloway says “I Quit” and Riddle wins the match. Yet another great match.

This was a great show that was much better than Evolve 83 which was a good show. The last three matches totally delivered and even though it was not as big of a match we also got to see another great Keith Lee performance. Evolve continues to be my favorite promotion right now. I really look forward to a potential Lee vs Riddle match as it could be the new CM Punk vs Samoa Joe.