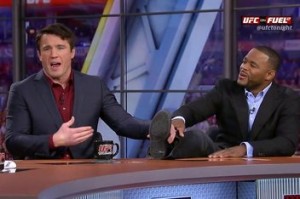 Former Light Heavyweight champion Rashad Evans has only lost one fight that wasn’t a title fight in the UFC, and just a few months ago was being talked about as the next challenger for Anderson Silva before Chris Weidman. However, ‘Suga’ Rashad is not interested in obsessing over how to get another shot at UFC gold.

“This is the question I hate the most.” Rashad told the GrappleTalk podcast, “It’s one of those questions that paints you in…I just want to go out there and be competing and putting on some great fights. Everything’s all about the title chase…yes I am competing to be number one, but too much b*llshit is about the f*cking title…It doesn’t matter where you rank me. You put me in a cage someplace and I’m going to beat that ass.”

Evans, who also won the second season of the Ultimate Fighter as a heavyweight, fights Chael Sonnen in Saturday’s UFC 167 co-main event, and Evans is loathe to speak ill of his friend.

However, Evans does think that Chael Sonnen is somewhat distracted and ignoring their fight on Saturday: “Chael is doing what Chael does, and Chael always looks for the perfect opportunity to look where he can sell a fight. He’s not really paying attention to [our fight]. Your attention gets distracted and you get pulled in different directions, it can affect you. It would appear to be [an advantage], but you never know what somebody’s mindset is.”

Evans does not have a plan in mind for who he wants to fight next, not one that he would share anyway. While Sonnen has successfully maneuvered himself into a fight with Wanderlei Silva, Evans is far more laid back about his future. “Whatever happens you gotta be able to do what you need to do,” Evans says, and he believes that people who demand particular opponents rarely get them – although he concedes that that might not be the case if your name is Chael P. Speaking of a potential fight with another fellow UFC on Fox pundit Daniel Cormier, Evans was sanguine: “It’s not personal, it’s just what needs to happen.” 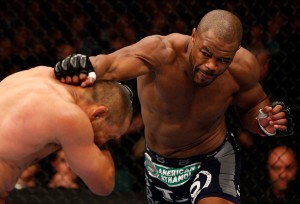 Whatever his future holds, one thing Evans is sure about is that it isn’t at middleweight. “I was thinking about it for a while, going down to 185, but it was something that once I really thought about it, a serious talk with myself, I thought “what would I really be achieving if I dropped down? Now I have to drop 20 pounds extra?” It gets kinda difficult for me to make 205 at times.”

So is a weight drop completely off the table? Rashad says yes: “I don’t wanna do it. I’ve been a 205 pounder for a while, I know I can compete with those guys and beat those guys.”

Hear the full interview, including Evans’ experiences of The Ultimate Fighter as a fighter and as a coach, on this week’s GrappleTalk podcast.