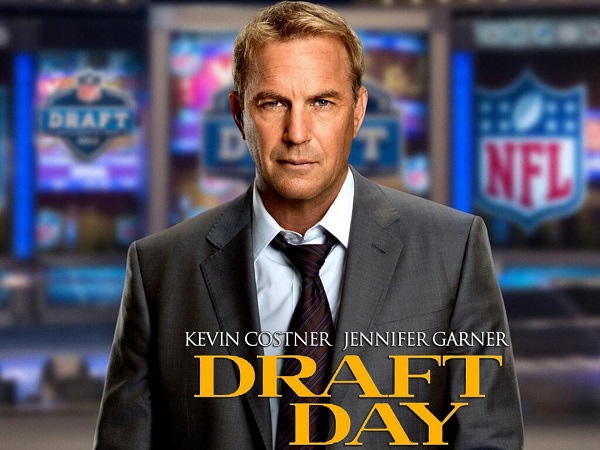 The Tale of Two Trades

Perhaps it was the excitement of the real 2014 NFL draft that led me to the movie theater to watch the latest Kevin Costner flick – Draft Day. I was excited the first time I saw the trailer and with the added emotion of this weekend’s real life festivities, I found myself entrenched in a very entertaining film about one of the most interesting aspects to the most popular sport in America. The film’s ensemble cast comes together very well on screen but Kevin Costner (rightfully) sets the pace for the film as the Cleveland Browns’ ambitious general manager Sonny Weaver Jr. Jennifer Garner plays Sonny’s love interest along with financial guru Ali. The stars continue to shine as Frank Langella plays Browns’ owner Anthony Molina and Dennis Leary as Coach Penn. Roger Goodell, Rich Eisen, Chris Berman, Mel Kiper and Jon Gruden are among the other NFL personalities that gives Draft Day that special Rocky Balboa realistic feeling that many movies strive to achieve.

The opening scenes of the film show that ever-important ticker, with twelve hours to go, Sonny (Costner) has the 7th pick in the 2014 NFL Draft and three big names are on his board. The unanimous number 1 – quarterback from Wisconsin Bo Callahan (Josh Pence). From Florida State, Ray Jennings (Arian Foster of the Houston Texans), a flashy running back with off-field trouble who also owns a legacy with the Browns as his father Earl Jennings (Terry Crews) is a team legend. The final name on the big board is the middle linebacker from Ohio State, Vontae Mack (Chadwick Boseman), who has the intensity but maybe too much emotion to play the game that Sonny wants. The sense of urgency created by the ticker along with the dialogue moves the film in the right direction and keeps a sometimes frantic pace to see how the next 12 hours will play out.

Keeping in line with a film like Moneyball, the story of a general manager’s drive to change an organization is a highly captivating story. The professional struggles he runs into over this 12-hour span include making the most important decisions in the franchise’s history in order to reestablish its future. Additionally, Sonny and Coach Penn have a constant battle much like Brad Pitt and Phillip Seymour Hoffman did in Moneyball about the future of the franchise. The constant argument of who has control of the team is up for grabs as the GM and Coach go head-to-head in some very heated scenes. That intensity is taken to all-new heights when Sonny agrees to trade away his No. 7 pick for the No. 1 overall pick along with two future No. 1 selections with Seattle’s GM Tom Michaels (Patrick St. Esprit). This new situation changes the scope of the draft for the Browns and now Sonny has the chance to take the overall #1 player in the draft, or does he have to find that hidden gem who will change the destiny of this franchise?

The draft preparation scenes are some of the best you will see when it comes to movies about professional football. The cinematography by Eric Steelberg along with Ivan Reitman’s direction creates a fast paced series of important events. Sonny’s search after getting the first round pick is the major intrigue of the story. Sonny and his crew are looking for any kind of information they can on these top three players to figure out who they will pick number one overall. Every aspect of the player’s lives are taken into account in order for the big decision to be made, but that is simply one of the decisions that Sonny has to make on this day.

As the title states, this is a tale of two trades as the professional decisions that Sonny makes end up being trades of one thing for another. The second tale is that of a middle-aged man past his prime, without a big W in his life. A man who just lost his father a week prior to the draft, and has just found out he will be a father in the future. Sonny’s personal complications add depth to the story and provide the most important character with the depth needed to have an emotional investment in his future.

Sonny’s relationship with Ali on a personal and professional standpoint is focused on throughout the film. While I feel as though it is helpful to the overall tale, I am not a huge Jennifer Garner fan. She did well throughout the film portraying a woman who grew up with football in her blood. The other woman in Sonny’s life is his mother Barb Weaver (Ellen Burstyn). With the death of his father on his mind, Sonny Jr. has to find a way to cope with the loss of a Cleveland Brown legend. One of the most important moments of the film comes just minutes before the draft begins where Sonny is faced with the professional and personal trades he has to make in his life.

Overall the film was very enjoyable to watch and something I look forward to watching again in the future. The real life presentation is great and it really feels as though this is being filmed during the actual draft that took place this weekend. After first viewing, it is definitely one of the top ten football themed movies I have ever seen. I would highly recommend going to see this movie to keep up with the current excitement following the 2014 NFL Draft.

Please keep coming back for more reviews in the future. Here’s to 2014 and the movies!