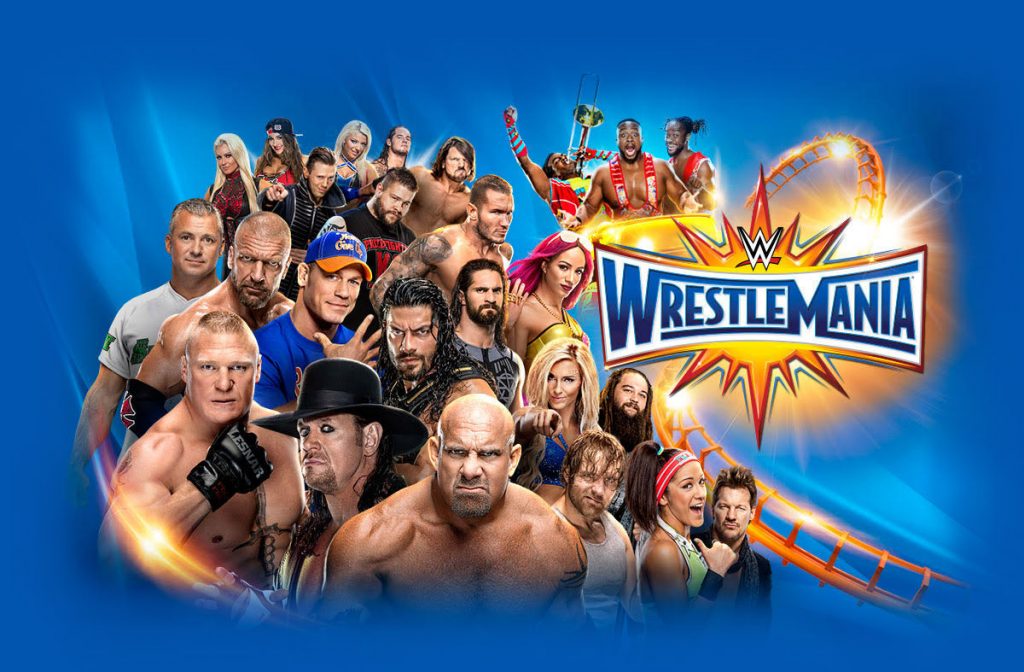 Allow me to be selfish for a minute. Having a newborn can be a blessing or a curse in regards to wrestling consumption. I am currently through one week of a two and a half week break from work and as expected, my new son is keeping some obscure hours. As a result, there has been plenty of 2:00 AM wrestling that has been going on in my house while feeding the little guy. It is better than infomercials right? WrestleMania weekend right in the middle of that break adds a little caveat. On one hand, I again should have time to watch the 10-12 shows that will probably make tape over the weekend. On the other hand, I can’t exactly tell my crying son that Roman vs Taker is on and I will give him his bottle in a second. As a result, I think it would be fun to have a running diary of all my graps watching from here until Raw on Monday night. This will almost certainly be scatterbrained and half baked since I haven’t seen 6 hours of sleep in a 24 hour period in nine days now but away we go.

3/30/17 20:32 EST- We start with the first bit of reality hitting my plans. My two and half year old son has an 20:00 bedtime. Between books and singing songs, that usually gets stretched out as you can see here. I turned on the FloSlam stream right as the Kincaid/Rush/Jaka match was starting. Twitter tells me I missed the Dickinson vs Thatcher opener which I can catch later. First off the aesthetics for WWN look really good here. The lighting and signage is professional. EVOLVE is normally a promotion that is embarrassing to watch in outside company due to how shoddy the arena look so props to Gabe here. I grabbed my sweet red pepper hummus (hey regular scheduled meals go out the window with a newborn FYI) and settled in. This as an opener for my weekend viewing was perfect. A match with not a lot of substance but some innovative moves which is the norm for a Kincaid match. I am not a huge defender of the guy just to his limitations but you can’t deny that his offense is dynamic. Lio fit right in and looked good and Jaka was able to provide a base for both of them. Lio gets the win as expected in his debut. Can’t knock a *** match to start us off.

3/30/17 20:54 EST – Never will complain about a squash and the Gate Keepers looked strong. Complicating everything, it is currently storming like crazy.

3/30/17 21:15 EST – A really weird angle occurs with Darby Allin coming out of a body bag and attacking Page and the cronies. Allin is someone that got over organically with his insane bumps but this side of his character was a bridge too far.

3/30/17 21:39 EST – Keith Lee vs Ricochet is your first great match of the weekend. Keith Lee looked like a star and a beast and has a great chance to be the breakout worker of the whole weekend. Ricochet bumped nicely off him and was able to use his flash to work to his advantage in trying to win the match. This was a great bounce back on the show after the lackluster Allin angle. Kudos to both.

3/30/17 22:07 EST – The tag title match between Catch Point and Elgin/Dijak disappointed me. I think all four guys had an off night execution wise but the bigger issue was that the story really dictated the crowd getting behind Catch Point as the defacto faces and I didn’t think Dijak and Elgin was cohesive enough as a unit to really put that over. The match did get better in the closing stretch and Fred Yehi hits a Canadian Destroyer in a legit great spot, but I had really high expectations here and they weren’t met at all.

I am on duty late night tonight so I need to catch some sleep so I am stopping here for EVOLVE but will back for Janela Spring Break later.

3/31/17 1:45 EST – In a minor miracle, my son slept for 3.5 hours allowing me to miss a chunk of the undercard. I awake in time to see Jimmy Lloyd win the “clusterfuck” in tremendous booking fashion by taking out Ethan Page and his Gate Keepers. Keith Lee and Lio Rush then went out and had a ***1/2 very good big vs little style match. Lio winning is an annoying booking choice but on a show like this that doesn’t matter in the grand scheme of things, I am more forgiving. Then we get Joey Janela vs Marty Janetty in what could be the most fun match of the entire year. This featured a Virgil run in and Earl Hebner coming in to officiate after four previous refs were taken out. A billion stars. That is then followed by Dan Severn vs Matt Riddle in a fun shoot style match. Wrestling is awesome. The marketing for Janela Spring Break was brilliant and from what I saw it delivered. I look forward to watching the remainder of the show tomorrow.

3/31/17 2:43 EST – With Janela’s live stream done, I am going back and watching the stuff from EVOLVE that I missed earlier. Props to FloSlam for having the replay up already.

3/31/17 2:54 EST – MY GOD AT THE PILEDRIVER THROUGH THE TABLE GALLOWAY GIVES RIDDLE. Does Riddle have a death wish? Good opener.

3/31/17 3:13 EST – I really liked Dickinson vs Thatcher. Really nice mat work and a match that didn’t overstay its welcome. Thatcher being champion for so long hasn’t had many of these compact and showcase matches in a while in EVOLVE so it was pleasant to see this match as a throwback to his style.

3/31/17 3:33 EST – The main event of EVOLVE 80 between Sabre Jr. and ACH took a little bit to get going but culminated in an exciting finish even though psychology in some ways went out the window. I thought this was definitely good but never reached the great level and again kind of ranked below my expectations. That ends EVOLVE 80 for me and it was a decent to good show but certainly probably won’t be on any Show of the Weekend lists when Monday rolls around.

3/31/17 12:12 EST – Watching PROGRESS or not with a doctors appointment at 14:00 was an easy decision given the IPPV troubles. Instead this morning I watched a good bit of 2000 stuff including an early CM Punk match and Adam Pearce when he had long hair.  Next showing is EVOLVE at 16:00.

3/31/17 16:35 EST – Opener of ZSJ and Elgin was the second best match I have seen so far. Physical and told a really strong story of Elgin being the powerhouse but Sabre really reaching deep into his bag of tricks and showing his resourcefulness. The finish of the pinning combination played off this and the cut above Sabre’s eye is gnarly and will be a factor for the remaining of his matches. I am probably at around ***3/4 or so on a star rating.

3/31/17 17:15 EST – We have a new match of the weekend. Two grown ass men in Donovan Dijak and Keith Lee went out there and had a huge hoss fight with bombs and some of the best high flying you will ever seen from guys this size. Keith Lee is positioning himself to be the performer of the weekend with nothing less than ***1/2 so far. Just an amazing big lads match.

3/31/17 17:56 EST – A really fun spotfest with the Catch Point crew and Kincaid/Theory/Sammy Guevara. Lots of dives and action. EVOLVE 81 is turning out to be a great show so far.

3/31/17 18:27 EST – With pasta florentine cooking in the oven, I am trying to digest my thoughts on Yehi vs Riddle. It deserves a rewatch as I thought it was great from a technical standpoint but did suffer from heat which is extremely odd to say when discussing a Matt Riddle match. The escapes and grappling of these two seemed to compliment each other nicely.

3/31/17 19:03 EST – Eating dinner and watching Darby Allin bleed and kill himself is quite the combo. Now that the show is over, EVOLVE 81 was superior to 80 IMO and a really good variety style show with something for everyone.

3/31/17 23:40 EST – Decided not to be such a garbage husband and spent the night playing some board games with my wife with the HOF in the background. Good speeches by all especially Beth Phoenix who blew me away.

4/1/17 13:16 EST – With this being the first Saturday at home with the baby, today was “kiss the ring” day where family came in and out to see the little guy. That made graps watching difficult but I did squeeze in the last two CWF Mid-Atlantic show. The six way scramble match with Trevor Lee, Chip Day, Aric Andrews, Cain Justice, Otto Schwanz and Smith Garrett was fantastic. Would be the 2nd best match I have seen these past couple of days sans Lee vs Dijak.

4/1/17 20:00 EST – PROGRESS vs EVOLVE on the roku stick big screen, NXT on lap top. LETS GO. Going to rewatch NXT in pockets and have my main focus on WWN show since NXT should be archived immediately.

4/1/17 20:25 EST – Opener for NXT was really fun and included Lovelace and Hero getting their first taste of NXT action and performing admirably. Perfect 10 getting pinned was an odd booking choice IMO. Mercury Rising started 15 minutes late and then started with a promo so I was able to devote my attention to NXT for now.

4/1/17 20:40 EST – Pretty brutal start for Mercury Rising. Keith Lee has had an amazing weekend and he wins a makeshift four way that was ok but not too exciting. On the negative side, Lenny Leonard is unhearable on commentary and we are 40 minutes past the start time of the show and have only had one seven minute inconsequential match.

4/1/17 21:14 EST – All Ego and Jimmy Havoc had a fun brawl which was needed badly on the Mercury Rising show. The ending booking was rough though with interference. I also had a half eye on three way tag on NXT which looks incredible.

4/1/17 21:35 EST – South Pacific Power Trip have been one of the breakout acts of Mania weekend. High energy and able to get the crowd invested right away.

4/1/17 22:03 EST – What a weird fn night. Drew McIntyre appears on NXT a mere 90 minutes after he gave a grandstanding speech to start the PROGRESS vs EVOLVE show.

4/1/17 23:13 EST – Riddle is the WWN Champion in a great result. This show overall was strange and bizarre with people made at the changes and the action overall being good but something missing. Maybe a good show to revisit down the road. Amazingly, I do think Mania still has an outside shot of being show of the weekend as only EVOLVE 81 was a blowaway great show so far.

4/2/17 10:18 EST – It is WrestleMania day. A year ago, I was on a cruise ship and cared nothing about watching the card so it is refreshing that I am looking forward to tonight. Watched the rest of NXT this morning. DIY vs Authors of Pain vs Revival was fabulous and its giving me pause whether that match or Lee vs Dijak is match of the weekend so far. I also though Tommy End vs La Sombra was really well done. The NXT card was really rocking but both the women’s title and NXT title matches were disappointing. Especially that main event. Roode went from a neck focus to a leg focus and neither were really compelling. Nakamura needs the call up badly.