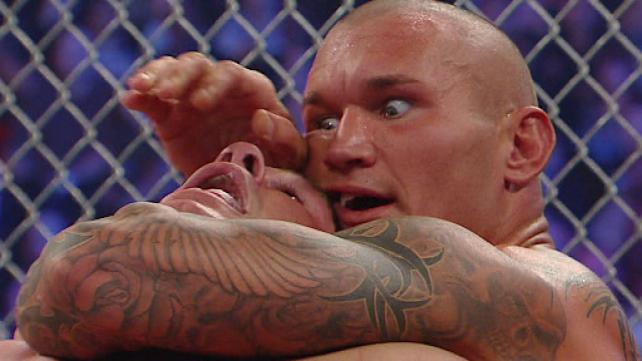 John Cena and Randy Orton have faced each other a lot, and this Sunday when they clash at Hell in a Cell, they’ll have a little history with them. Despite a flood of recent gimmick-PPV enforced Hell in a Cell matches, we’ve never had a 1-on-1 rematch until now. What can we expect from these two within the confines of the cold steel surrounding the devil’s playground? In the vein of Chad’s Vintage Vault Pre-Viewing pieces, let’s take a look back at the first Hell in a Cell match between these two.

In the middle of John Cena and Randy Orton’s long feud in 2009, the WWE had their first Hell in a Cell themed PPV. Now recently we’re more accustomed to matchups being thrown into this stipulation without warrant, but here at least it could be argued as a natural progression of their feud, being the third match-up of theirs in as many months. SummerSlam saw Orton retain after a restart-heavy contest (similar to Shawn and Vader in 1996) and Breaking Point had Cena winning the title from Orton after taking a handcuffed beating for most of the match. Both guys are portrayed as near-equals so far in the feud and a stipulation on this match is that should Orton lose, he gets no more chances at Cena’s title.

This is Cena’s first match in the Cell, with Orton having battled the Undertaker prior, and despite being for the WWE title, this match is smack-dab in the middle of the show – the second of three Cell matches on the card (more on this to come). Lawler notes Orton’s advantage given his experience and that “hell in a cell can be a great ally.” Valid points followed up by Michael Cole boasting that this is “a renewal of one of the greatest rivalries in WWE history!” THEY HAVE BEEN WRESTLING EACH OTHER FOR MONTHS, MICHAEL. 2014 note: expect this line from Cole on Sunday.

Cena is decked out in his John Deere-themed color scheme, and both guys are greeted to a pretty tepid response. Orton’s pre-match message has been “You don’t know what I’m capable of” – which is factually true, as he did try to murder Cena with pyro the following month. Orton’s tough guy talk results in him immediately trying to escape the cage and run away but alas, they have the door chained so no shenanigans outside the Cell in this one. Now, before we go into how the Cell is used here, it is important to reiterate that there are three Cell matches on this show, so who knows what limitations they were given since DX and Legacy were in the main event. A familiar trope nowadays is how little the physical cell is used, and this match pretty much epitomizes that, but they do enough around the rules of the match to make it a little different.

After trying to escape, Orton sneaks back in the ring and takes control on Cena with punches and a belly-to-belly suplex. Cena goes for an early AA that Orton gets out of easily and John sends him off the ropes only for Orton to duck a flying shoulderblock. The crowd chants “RKO” in their approval of this advanced scouting by Randy. We get our first use of the Cell with Orton pushing Cena off the apron into it. Orton grates Cena’s face into the fencing with his knee for Cell move #2 before Cena gets control and picks Orton up to thrust him into the wall a couple times (Cell move #3). This visually shows off Cena’s strength but the actual action is weak and looks like it took more out of Cena. Orton plays off this by escaping being thrown head first into the Cell as he knocks Cena into it (Cell move #4). We get a desperate “We want blood!” chant from the crowd but that’s it for interactions with the actual gimmick. So much for the Cell being a great ally. There’s better stuff to come though.

Orton eventually succeeds getting the steel steps into the ring, missing the first time to the crowd’s delight, and he grabs Cena for the rope DDT but Cena wisely blocks by putting his arms down and grabbing onto the steps. This results in Orton being lunged out of the ring using physics and Cena preps throwing the steps. Orton kind of lures him into this as when Cena does throw them, he quickly darts out of the way and immediately goes into the ring and TRADEMARK RANDY ORTON’S him with his backbreaker.

Cena gets on a brief roll after this, hitting the five knuckle shuffle as King exclaims that there has been a huge momentum shift. There most definitely has not been momentum for either guy thus far, and on cue, Orton backdrops Cena to the apron and hits the rope DDT for real. Orton pumps himself up for the RKO but Cena pushes him off the ropes and hits the AA, a spot seen in most of their matches. With this not being enough for a three count, Cena, who has really not done a ton of damage to even warrant a finisher, brings Orton to the top of the turnbuckle and sets him up for a super AA – potentially to the floor as Lawler notes, which would have been something. Orton gets out of this with a correctly-called ELECTRIC CHAIR by Lawler, with Michael Cole following that up with “IN A HELL IN A CELL”, which has to be a callback to the Chamber of Horror’s match from WCW in 1991. I mean, when else has a physical electric chair been in a Cell-like structure?

Orton goes up with Cena for a superplex but Cena punches him down and then misses the leg drop in another well-scouted spot by Orton. Orton grabs a chair now and rather than telegraphed swings to the back, Orton measures up the crown of the chair with Cena’s neck and smashes him, with the crowd oohing and Cole correctly pointing out Cena’s past neck issues. This is a fantastic part of the match to build on the psychology that Orton will use the rest of the way. Orton assaults Cena in the ribs for good measure, but Cena kicks out, despite him presumably having lost his wind there. Orton now places the chair under Cena’s head and goes for a flying knee drop but Cena is able to escape, crunching Randy’s knee into the steel in the process.

With Orton’s knee now impacted, Cena quickly latches on the STF but Orton drags him to the ropes. There’s no rope break though as we’re enforcing the rules of a Hell in a Cell match correctly tonight, so Orton just crawls further until Cena has to release because the bottom rope prevents him from keeping the hold latched on. Really good stuff there. Cena wisely gets up and just drags Orton back to the middle to re-apply the hold but Orton kicks him off and we get a ref bump. Cena grabs the STF again and this time Orton turns around to make sure the ref is out of the ring and taps, giving John the visual win. That was the not-so-good stuff. Cena thinks he’s won and then goes to drag the ref back in, allowing Orton to rip off a RKO but Cena kicks out in a great false finish that had the crowd excited.

Orton is very much selling the knee here and the announcers, who all-in-all were good, put over the leg damage that has been done. Orton channels the “you don’t know what I’m capable of” story and ties Cena in the ropes (again a nod to no rope breaks within the Cell) and then wrenches on a tremendous headlock, playing off the earlier neck work. Cena is passed out now and the ref untangles his lifeless body from the ropes as Orton sets up in the corner. Thinking on what he should do, Orton has an epiphany as Cena staggers to the middle of the ring, winding up and going for the PUNT but Cena moves out of the way. Oh wait, Orton PINS Cena off this and wins the title. Good grief, what a terrible head-on camera angle for that finish as Orton missed by a good 4-6 inches. This was even worse than the whiff shown at WrestleMania 25. The replays are at least from the side and things look more convincing. Orton continues to sell the knee post-match, completely what was a really good performance by him. The King notes this could keep Cena out for a while except they show Cena with complete consciousness sitting in the ring after the match. The punt is one of the more protected finishers in WWE but maybe Cena was just playing off how lightly Orton hit it or something. In a way, enough to get the win but not cripple him for the following RAW and next month’s PPV. At least that’s how I’ve retconned the finish.

I don’t think we can expect much more from the Cell standpoint in 2014, but I did like how they worked around the rules and had some unique sequences that were fairly logical and played out well. These guys always seem to clock in around the **-*** range, even in hostile environments like the 2014 Royal Rumble. I enjoyed the hardcore aspects they brought into their TLC match so who knows, maybe we’ll be pleasantly surprised at the latest incarnation of “one of the greatest rivalries in WWE history.”