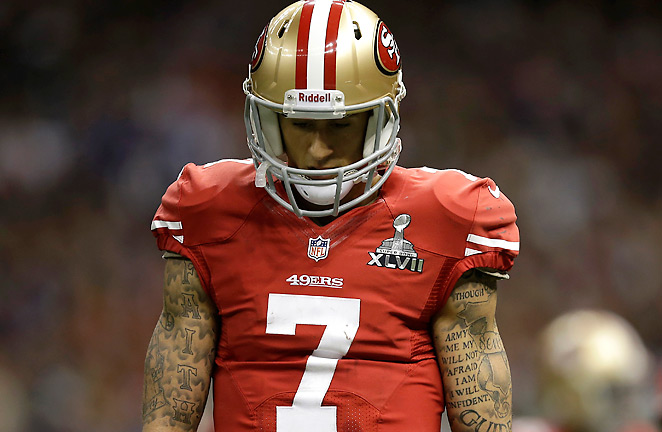 We’re through three weeks of the NFL season and there have already, predictably, been a number of surprises: The Chiefs have already won one more game than they did all of last season, RGIII and the Redskins are still looking for their first win, and Mike Glennon is a starting QB. The most unexpected development, in my opinion, is that the powerhouse, Super Bowl runner-up, San Francisco 49ers are 1-2 and appear to be on the ropes. On the heels of a 27-7 thrashing at the hands of the upstart Indianapolis Colts, the boys from San Fran are playing in what appears to be an early must-win game tonight in St. Louis against Sam Bradford and the Rams. Already two games back in the hotly contested NFC West to juggernaut Seattle, a loss tonight would leave the Niners in complete disarray. Can they right the ship? The Cowboy is on the case for you with a full breakdown!

Things started smoothly enough for the Niners in Week 1 with a big win against playoff rival Green Bay. Hot shot QB Colin Kaepernick looked every bit the future MVP that many have called him, throwing for over 400 yards, with over 200 of those going to new weapon Anquan Boldin. After that win, nobody foresaw what was coming in the next two weeks. A soul sucking loss on the road to bitter rival Seattle in which the Niners were utterly dominated on both sides of the ball was not totally unexpected. Seattle, after all, has the most significant home field advantage in all of sports. There was some concern with how stagnant the Kaepernick led offense looked in that game, but most of that was chalked up to Seattle’s dominating defense coming through on their home field. Certainly the Niners would bounce back in a big way at home against the not-so-dominating Colts defense. The oddsmakers agreed as San Fran was a solid double digit favorite for their Week 2 tilt with the Colts.

As they say, “That’s why they play the games”. The Colts took it to the Niners on their home turf from the opening kickoff to the final whistle. The Indianapolis offensive line, widely considered one of the worst in the league, consistently got the better of the vaunted San Francisco defense front seven on their way to a whopping 184 yards rushing. The Indianapolis defense, considered below average, held the usually high flying Niners attack to a measly seven points. Kaepernick, a career 60% passer, was held to a paltry 13-27 for 150 yards and no TDs. Overall, it was a concerning performance, quite frankly one bordering on embarrassment. Was this a harbinger of things to come or simply a bump in the road for a team widely considered at worst the second best team in football a mere two weeks prior? As with most things in life and football, the answer lies somewhere in the middle.

One major concern for the Niners coming into the season was the injury to Crabtree. From the time Kaepernick took over in Week 10 of 2012, Crabtree was clearly his preferred target and emerged as one of the top receivers in the NFL. When he went down with an Achilles injury at the beginning of the preseason, it thrust the veteran Boldin into the role of the team’s top target. No one will question Boldin’s toughness or ability to haul passes in with defenders draped all over him, but a number one receiver he is not. At this point in his career, Boldin is mainly a possession receiver who no longer possesses the ability to create separation. While this was masked with his huge Week 1 performance against the comically inept Packers secondary, it became abundantly clear in the following two contests. The effect was exacerbated with big play TE Vernon Davis having to sit last week against the Colts. With raw and unproven Kyle Williams as the starter opposite Boldin and no threat from the TE position, Kaepernick had very limited options in the passing game. As any Patriots fan will tell you, it doesn’t matter how good your QB is if he doesn’t have anybody to throw the ball to. The Niners hope to have Davis back tonight against the Rams. If he plays, it could give the passing game the shot in the arm it needs to be productive.

Even with the offense floundering, no one could have predicted what happened to the Niners defense last week against the Colts. The defense, led by Patrick Willis, was universally considered a top two or three unit coming into the season. It should be truly disturbing to Jim Harbaugh and the San Francisco coaching staff how badly they were manhandled against Indianapolis. With the very public Aldon Smith situation and the injury to Willis weighing them down, I am very skeptical that the Niners are capable of performing at an elite level on this side of the ball.   Nnamdi Asomugha has been an unmitigated disaster as the nickel back and he is also nursing a knee injury. Navarro Bowman, Justin Smith, solid coaching, and a lot of pride will keep this unit competitive but the Niners cannot count on them to be the dominating force of last year. With Smith most likely out for at least a month and Willis unlikely to suit up this week, the rest of the defense needs to step up so San Francisco can tread water until they are back to full strength.

With all that said, this is not a team devoid of talent. They have one of the deepest, most talent laden rosters in the league. If any team is equipped to weather this storm it is the Niners. Kaepernick is truly a dynamic threat with both his arm and legs and the running game, led by stud Frank Gore and young fireplug Kendall Hunter, is one of the best in the NFL. The Rams gave up a ridiculous 175 yards rushing to pedestrian DeMarco Murray last week so they can definitely be gashed on the ground. The read option, which was so successful for Kaepernick last year, has been basically invisible the first three weeks of the season. Harbaugh is too good of a coach to not make the obvious adjustment and incorporate the read option back into the offense. Getting Kaepernick and the running backs going on the ground will force defenses to move another defender into the box and will open up things for Boldin and Davis. As a young QB, Kaepernick’s confidence and mental state are a huge factor in his performance on the field. He looked utterly befuddled and frustrated last week. I expect Harbaugh to push the right buttons to get his young signal caller going again.

While it will be tough sledding, the Cowboy is calling for a Niners victory tonight in hostile territory. I believe they are too talented and too well coached to fall to 1-3. The injuries and Seattle’s current dominance will make winning the West exceedingly difficult, but I can’t imagine this team not earning a Wild Card berth and being extremely dangerous in the playoffs (although I don’t think they can win in Seattle, which may prove problematic). Look for Gore and Hunter to come up big and Kaepernick to be his normally efficient self as the Niners right the ship and get back to .500.

In this theater of the unexpected we call today’s NFL, nothing is certain. However things play out, rest assured the Cowboy will be here providing in depth analysis at PTBN!