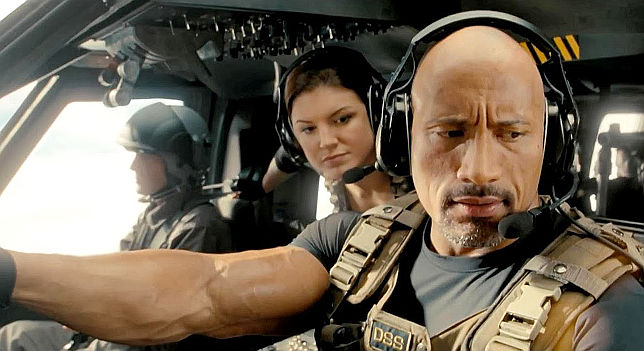 In San Andreas, the mother of all earthquakes goes one on one…with the great one! The most powerful earthquake the world has ever seen destroys everything California has to offer, but it can’t stop the Rock! The Jabroni beating, pie eating, trail blazing, eyebrow raising, son of a gun, taking over Hollywood, THE ROCK!

The Rock plays rescue chopper pilot Chief Ray Gaines, who with over 600 saves under his belt, is a true American hero. With that established, throughout the film, he will forget about all those dying around him to save his daughter and ex-wife, taking the quality over quantity approach. Being one of the millions…AND MILLIONS! of the Rock’s fans, I can say the Great One overachieves in this movie. He acts with a level of subtly and gives the simple character he plays layers of emotion that most actors are incapable of achieving. Those layers may be covered under pounds and pounds of muscle, but he takes a standard disaster action flick and gives it the heart and soul it needs to stand out.

Brad Peyton’s San Andreas takes the Roland Emmerich model, adds the Rock and several large scale action set pieces, to equal what actually ends up being a great action movie. Some of the action borderlines ridiculous and at times is even silly, but in a summer popcorn blockbuster like this, who cares. This isn’t a movie where I brought in pen and paper to take detailed notes, in an attempt to discover if the earthquake was really a metaphor for society destroying itself. All I wanted was for the Rock to risk life and limb, complete impossible tasks only the Great One could achieve, and save the day. And to be honest, I got more than I bargained for. Not only was I fully entertained from beginning to end, I was blown away by a film that never pulled any punches. I felt like I checked directly into the SmackDown hotel, and had the smack layeth down upon me.

The synopsis of San Andreas is kept quite simple. The Rock’s ex-wife, played by the lovely Carla Gugino, is moving on to start a new life with a new man, building developer Daniel, played by Ioan Gruffudd who even with not much to do finds a way to be prodigious. Daniel is taking their daughter to college, but first is taking a trip to his new office building in San Francisco on his private jet for some bonding. While at his new building, the earthquake hits, Mister Fantastic runs away, so Rock’s daughter teams up with two adorable Brits as they wait for him to save her. Now the Rock can begin his heroes’ journey.

It was then I realized I was watching 2012. Or was I? A divorced husband returns to his wife’s new life, with her new man who is trying to take his place (even though they swear they can’t). Once there, we discover their divorce is for reasons other than love, just so we know they will be able to fall back in love by the end, and once again be a family. I know I’ve seen this exactly plotline in other films, but 2012 is nearly exactly the same. Except instead of John Cusack in a limo, it’s the Rock in a helicopter, or truck, or speedboat, or plane, or parachuting into AT&T park. This can attest for how cool the Rock is. I have never wanted to parachute, but after how smooth the Rock looked landing on second base, I would consider it. True action heroes can do it on land, in the water, or in the sky. If only this movie had invading aliens, the Rock could have conquered space too.

But, there is one difference, one element that raises this movie up like the left side of the fault line, and her name is Alexandra Daddario. I’ve seen her before in Percy Jackson, but just like that movie, her performance wasn’t anything special. Alexandra has since grown up into a woman, one that will be in my dreams for a long, long time. With all the special effects and flexing of the Rock’s muscles, she is by far the best thing to look at. With eyes so beautiful, filled with a color that doesn’t even exists on the color spectrum, and long runs in slow motion, she stole my heart. I’m almost starting to wonder if I liked this movie that much, or if I just fell madly in love and watched this movie with Alexandra Daddario blinders strapped to my head.

There is also Paul Giamatti, who plays a CalTech seismologist who should have been named Doctor Exposition. He gives us all we need to know about the earthquake, with typical disaster one liners. But, he does it in his own Giamatti style, which makes it feel fresh and gives him a fatherly tone. And little did we know, but he is owner of the strongest desks on the west coast, that somehow were invulnerable to 9.6 level earthquakes. He watches the Hoover Dam get destroyed, loses a colleague, and returns back to CalTech to let the world know during only a few minutes, he has suddenly discovered a way to predict earthquakes. I didn’t ask questions, I was proud of Rhyno, (Or is it the Lady in the Water), and accepted the way of the story. If they spent time explaining how to predict earthquakes, it would have been Twister with the Rock, instead of the tremendous action movie we were served.

The film covers its massive scale, and delivers the intensity with great performances and overwhelming action sequences to achieve greatness. The Great One himself takes his film and does exactly what he does on screen, rescues it from the tsunami by going full speed ahead. So many times, I found myself short of breath, or crushing the end of the arm rest as the intensity passed from the screen directly to me. I watched this in IMAX 3D, and have to believe there is such a difference with a 2D viewing. This is one movie that needs to be watched on the largest scale possible.

The one part of the film that made me laugh was the Rock’s occupation. His job was to save as many people as possible, a point they make over and over in the beginning. Yet, throughout this film, he couldn’t care less about a single individual, hundreds of people will die because of his choice to only care about saving his family. He sets out to save his wife, and together, they set out to save his daughter, while all around them hundreds and thousands of people are perishing as he barely looks back. But then again, in this same vein, it becomes somewhat realistic. Try imagining yourself lost in this type of tragedy or struggle. If there world was collapsing around me and my family was in trouble, I would have no problem pushing strangers aside to get to them. This is the Rock, and he has family to save. I don’t question the Rock.

Near the end of the film I started to realize how unsettling it was to be watching all these people dying in the massive earthquake. I counted my graces that I don’t live on the west coast, because in all honestly, the events of this film will eventually happen. I’m not saying San Andreas will come true as it unfolds in the film, that would be irrational, or that the Hoover Dam can collapse with such ease, but just that the massive earthquake on the faul, will eventually occur. A tsunami of that size can’t occur because of an earthquake. A little movie called Deep Impact once taught me that only an asteroid can cause such a wave. But it still doesn’t make California’s coast safe. These thoughts stay in the back of your mind, and give it just the smidgen of realism it needs to fully succeed. And it does by leaps and bounds.

It made me understand the lengths I would go to save my family from any peril they encountered. This film made me clap, made me laugh, and even once I found myself shouting out loud. And in the end, there was even a few tears shed, but don’t ask me to confirm because I will never admit it. The movie had plenty of emotion and heart to filter through the special effects and make it the great film it was. It had moments that were so intense I was short of breath and exhaled in the moment of relief. As much as I loved Avengers: Age of Ultron, San Andreas was more enjoyable. And, it made me realize that everyone needs a British sidekick.

In final, I think San Andreas will be lost among the great disaster films. I hope it becomes enough of a success to stand out, because it truly deserves to be ranked above all of the disaster films we have watched in the last decade. But, FINALLY! The Rock has come back to great filmmaking, and the box office proved he has the power to lead all on his own. For me, it is his best film to date, just edging out The Rundown and probably Walking Tall. And, off topic, if you have never heard or seen Southland Tales, it’s well worth a watch.

The Rock genuinely has the power to bring me to the theater, and deserves my hard earned money. If I am willing to fork over a few bills to see the Rock in a tutu playing the tooth fairy, then the Rock will get me to the theater for anything. And, it is well deserved. Mad Max: Fury Road was an excellent action movie, but it had nothing close to a heart and soul. There were no moments of emotion or desire, I never cared what characters lived or died, but in San Andreas, you want the right people to live and the right people to die, and you easily become emotionally entangled in their struggles.

San Andreas will be one of the few surprise hits of the summer. What did I rate this movie? IT DOESN’T MATTER WHAT I RATED THIS MOVIE!

8.5 People’s Elbows out of 10…IF YA SMELLLLLLLLLL…What the Rock…is cooking!

Video Jukebox Song Of The Day #51 – “Sabotage” by Beastie Boys