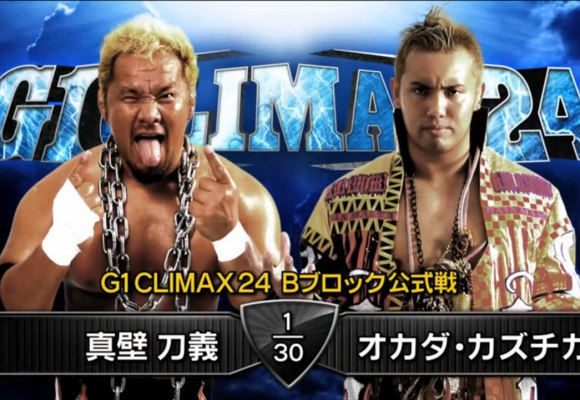 Two shows down and a work at home day tomorrow! We may be caught up by the final night after all. I have done a fairly good job avoiding as many spoilers as I could coming into this shows but I do know that this is generally regarded as one of the weaker nights so far. I will remain cautiously optimistic.

Gallows did a pretty admirable job pounding away on Tanahashi in night 2 and Honma can certainly take a whipping so I entered this match looking forward to it. Crowd chants for Honma as he will be a sentimental favorite throughout this tournament. Honma misses his diving headbutt. One of the drawbacks of watching these shows this quickly is that has happened three times now and is becoming a Flair scaling the top rope type moment. Just as I typed that, we get our first guardrail whip by Gallows. No counter tonight, I’ll just say that tactic is beyond played in New Japan. Gallows work on top wasn’t as interesting as in the Tanahashi match as he resorts to a chinlock for a bit which is ill-advised in an eight minute match. Honma starts to mount a comeback but is stunted with a brainbuster. Honma again is able to muster up a little offense but the headbutt from the top fails him this time. Gallows then absolutely takes his head off with a lariat that I bought as the finish. The Gallows Pole (think full nelson spinebuster) has Honma narrowly escaping. After a roll up by Honma, Gallows hits a big boot and a second Gallows Pole for the win. This was a pretty generic opening and Gallows took a step back here after a good performance vs. Tanahashi on night 2. **

I wasn’t looking forward to this match but it was least an opportunity for Karl to protect his spot. Extremely generic action starts us off here. They meander around the ringside area and I was pegging this as a contender for worst match of the tournament so far. Anderson does start working on the left leg of Archer but doesn’t have an inordinate amount of desperation to what he is doing. We get a chop exchange and a lot of back and forth action of your turn, my turn. It takes all of my physical well-being to not check my phone while this match finishes up. After a few more minutes of generic action, Archer hits his finisher and wins. Anderson really needs a good performance in this G-1 as he is my LVP so far. I thought this match was pretty dreadful and my least favorite so far. *

Much like Anderson, Yujiro is also a guy who has underwhelmed me so far. On the contrary, I have enjoyed what Tenzan has brought to the table even with his limitations. I haven’t really cared or thought much about Tenzan as a main singles player in a while, but that perception may be changing. Yujiro starts this match off slower paced, which I can appreciate. The early portion is worked around a headlock. Tenzan is staying active within the headlock. Yujiro has these, “look at me, I’m a heel” mannerisms that don’t work for me. Tenzan takes the action to the outside and my “favorite” trope ensues. Yujiro hits a sliding knee running down the ramp. The work Yujiro displays in the ring is again unfocused and not inspiring. Tenzan livens things up with his comeback and spurts during this segment. Tenzan misses a diving headbutt to put the end to his flurry. Yujiro again doesn’t do really anything of note. Here comes Tenzan chopping back again and the crowd is super attached to this guy. He mixes in a headbutt with his chops and looks for the tombstone. Yujiro kicks out of this but gets locked in the Anaconda Vice and Yujiro taps. Yay. This was the best match so far but again Yujiro didn’t show me much. **1/2

We will see what Ishii can get out of Shelton here. Big time slugfest starts out. Shelton is again seen as someone that can toe to toe with these power heavy guys which is not a smart narrative to take. Once the strike exchanges are played out they roll through each others anklelock attempts. Shelton has really taken too much of this match as he rolls through multiple German suplexes. Spinebuster by Shelton has Ishii reeling. Ishii recovers slightly by hitting a German of his own. Ishii blocks the spinning kick and hits a headbutt and lariat. Benjamin is able to hit his kick combination and then get the Paydirt for the victory. Shelton is now 3-0 which is the shock of the tourney so far. Match was nothing better than decent. **1/4

Along with Tenzan, Yano has been a pleasant surprise. His match the opening night vs. Suzuki was more of the same but I loved the slimy way he handled the bout vs. AJ Styles. Yano can’t stop laughing at Naito’s antics especially with this eye opening business. Yano yelling “break” as he immediately grabs the ropes is excellent. What a breath of fresh air watching all of these matches in succession. Yano just hurls a chair at Naito and he is busted open, which is a rarity in Japanese wrestling. I am really appreciative of the variety they are trying to convey with this match. Yano whips Naito back first into the exposed turnbuckle. A suplex from Yano keeps the emphasis of damage on Naito’s back. Naito hits a missile dropkick but Yano is able to throw him forehead first into the turnbuckle. Naito comes back but Yano hangs on to the referee to prevent being German suplexed. Eventually, Naito is able to hit it and he follows that up with his twisting dive from the top to pick up the victory. Fun match and I am really digging what Yano is bringing to the table. ***

This start off our second half looks pretty tasty on paper. The first portion of this match is tough to transcribe as it was mostly grappling and all about maintain a dominant advantage, that being said, it was engaging and another welcome change of pace from the stuff we have seen throughout the first three nights. Things open up on the outside and the strikes are fired over fiercely back into the ring. Shibata beating down Smith in the corner and following up with a dropkick is a brutal looking spot. Shibata locks on a choke and Smith does a great job at gradually losing air. A back suplex gives him a temporary reprieve, but Shibata keeps it locked on. DBS reaches the ropes. We get my least favorite spot of the match so far as Shibata hits a back suplex that is no sold by DBS and he then hits one of his own. Shibata locks on a triangle that DBS is again able to escape. Really nice lariat from DBS gives him a near win. He follows up with a big powerbomb and picks up the big victory. A few annoying things keep this match from being great, but we still got a very good affair and a big win for DBS Jr. ***1/4

I didn’t know what to expect coming into this match. It could either be comically bad or surprisingly good. Nagata refuses to follow Fale out to the floor in the early going so that is one advantage already. This is about where the compliments end for this match. Fale does some slow offense that doesn’t lead to anywhere. Nagata takes over and leads Fale through most of his repertoire but again nothing is meaningful. Fale responds back and hits a big splash for a two count. Exploder by Yuji. Yuji finds an arm and goes into his trance to a good reaction from the crowd. Glad they are still in this one, as I have checked out big time. Fale hits one of the worst spears you will see as Yuji is rushing into the corner. The Bad Luck Fall luckily puts this one away. I did like this slightly better than Archer vs. Anderson but not my much. *1/2

I sense this could be pretty fun on paper. Pace is pretty breakneck starting out. Action spills outside where Minoru utilizes a bell and then hits a bone crushing boot that echos throughout the arena. Suzuki striking a pose on the mat inside and doing leg exercises mocking Goto is glorious. Goto tries to fire back with chops but gets laughed at by Suzuki. I started to type Suzuki vs. Yano dick contest would be fun…And then I remembered they are entrenched in a never ending feud that is anything but fun. Goto hits a headbutt to send Minoru down but Suzuki takes out the referee and gets Taka to interfere on his behalf. Goto is able to vanquish Taka but this did allow Suzuki the opening to regain control. Intricate rope running seems to set up Goto’s lariat but instead Suzuki locks on the choke. Goto has one more trick up his sleeve as he ties up Suzuki and cradles him for the win. This is the second time Suzuki has taken most of the match only to get blindsided by a roll up. Match was a fun sprint. **3/4

The 1/4/11 Wrestle Kingdom main event rematch is our semi-main tonight. Opening chain wrestling leads to Tanahashi working over the arm. This sequence was fairly compelling and made even more so by the fact that when Kojima comes back we get two to three minutes of aimless strike exchanges before the next high point of the match is Tanahashi getting hit with a lariat on the top rope and careening to the outside. First High Fly Flow eats knees. Kojima hits some forearms and then an Emerald Flowsion for a nearfall. Kojima goes for the kill but eats a slingblade clothesline. I like how Kojima has kept firing back but a High Fly Flow advances Tanahashi on. Uneven match at times which prevents it from reaching a really good level. ***1/4

Watching this one in bed so the play by play will go out the window as to not piss off the preggo wife. These two had a match at Dominion last year that I liked but didn’t love. This was an improvement to me and one of the better matches of the tournament so far. Okada took most of the match and worked over Makabe well and overwhelmed him. Makabe mounts a comeback and has the crowd really behind him to pull off what would be considered an upset. Okada is too strong though. After Makabe misses the flying knee drop, Okada takes over and hits a German suplex and the Rainmaker to pick up the victory. I appreciated the tonal shifts of this match as there was really only three and each had a sustained feeling to them. ***1/2

Well night three had a bit of bad, with some good mixed in. It felt uneven like night two and didn’t have as many standout matches to make it enjoyable. Nights 4 and 5 have received a ton amount of hype even from New Japan critics so I am eagerly anticipating watching those.