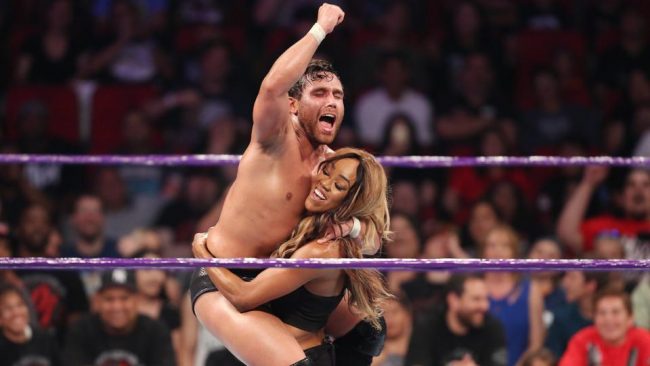 May 2, 2017
From the Save Mart Center in Fresno, CA
Your hosts are Tom Phillips and Corey Graves

The show starts with footage once Smackdown ended as Chris Jericho was helped to the back after being attacked by Kevin Owens.

We get a video package from Monday night where TJP attacked Austin Aries’ knee after their match as Neville was playing some mind games with him before their match by telling him to make the most of their match if he wants to get a title shot.

These two end in a stalemate after a fast-paced reversal sequence. Dorado lands a kick then takes TJP outside with a hurricarana before landing a kick on the apron. Dorado hits a quebrada then takes the action back inside where TJP drops him into the turnbuckle. TJP stomps away then stretches out Dorado between the ropes. He works a chinlock then goes for the mask. Dorado fights back and hits what appeared to have been a moonsault stomp from the rope that really looked ugly. TJP avoids a handspring cutter and hits a back elbow smash but Dorado takes him down with a roundhouse kick for two. He goes up top but TJP cuts him off but is able to get him off and hit a sunset flip. TJP goes after the mask again then puts on the knee bar for the win (7:03) **1/4.

Thoughts: The match started off at a fast pace and it was fun to watch but it sort of fell apart near the end. TJP is better suited as a heel and is starting to get over in that role though so that’s good to see because the heel side of the Cruiserweight Division is rather weak.

Corey Graves does a sitdown interview with The Brian Kendrick. He asks him about his troubles with Akira Tozawa as Kendrick said it started three months ago when he wanted Tozawa to be his protege, as he was a fan of his work in Japan. Kendrick says Tozawa thinks he knows it all and since he has been there before, he decided to teach him a lesson. He talks about Tozawa being in love with the WWE Universe and talks about the crowd mimicking his chant and focusing on that more than winning matches, which he says is the point of being here, but Tozawa kicks him off the chair and gives us lesson #5, which is to always end the interview with an impact as he starts chanting. Weird segment with the babyface sneak attacking the heel during the interview. I know its payback for Kendrick teaching lessons at all but the interview itself was not very good and this feud has pretty much run out of steam. Tozawa would benefit from feuding with someone else.

Gulak has thankfully ditched his goofy robe and comes out with his “No Fly Zone” sign and a megaphone. We are shown Gulak in an insert promo as he talks about wanting 205 Live to reach its full potential but there is too much high-flying showboating like we have seen from Ali. The match starts with Gulak grounding Ali with a side headlock as Phillips says the WWE Universe wants high-flying moves. Gulak stomps the back then tells Ali he better get smart as he whips him hard into the corner. Ali comes back with a pair of armdrags then snaps off a rana. Ali decks Gulak with a forearm and heads up top but Gulak ducks out on the apron and tells the referee to back off Ali. Gulak charges at Ali and knocks him down then turns him inside out with a clothesline. Gulak works another headlock but Ali escapes. Ali hits a dropkick then avoids a boot in the corner and knocks him down. Ali hits his rolling neckbreaker then goes up top but Gulak grabs his foot and holds on until Ali kicks him in the head. Ali climbs back up and goes for a frog splash but Gulak gets his knees up then cradles him for the win (5:03) **1/2.

Thoughts: Good action here and I’d really like to see a longer match between the two. Gulak is embracing this gimmick and its starting to work for him. He also looked good in the ring, as did Ali, as I assume despite Gulak winning clean that this feud will continue.

After the match, Dasha Fuentes asks him about his win. Gulak says this was a vindication of his campaign and proved that high-lying does not work. He then blames the fans for cheering high-flyers as it encourages them to do what does not work before closing by saying what he does is what actually works. I thought this was good stuff from Gulak and he is starting to get some heel heat now.

Swann works a side headlock on the mat to start. He kicks Dar outside then takes Dar down after he charged at him as he goes back to the headlock. Swann gets two with a dropkick after a reversal sequence and goes back to yet another headlock. Dar is able to pick Swann up and crotch him on the top rope then clotheslines him off as Swann rolls outside. Swann is back inside as Dar hammers away. Swann figts back and hits a few chops but Dar takes out his leg and goes to work on that. Dar hits a back suplex but misses a running kick as Swann fights back. Swann hammers away in the corner but Dar is able to kick him off the apron. They fight outside then Dar uses an armbreaker before rolling back inside. Swann is in and tosses Dar out flies out with a somersault plancha. Swann gets some momentum going then tosses Dar inside and heads up top for the Phoenix Splash but that only gets two. Swann hits a roundhouse kick then gets two with a cradle. He heads up to the middle rope but Dar sidesteps the attack and works a Fujiwara armbar. Swann reaches the ropes then is able to kick Dar cuts him off and stomps away then hits a running kick for the win (13:27) **.

Thoughts: This match was too long and slow for the Cruiserweight Division. The WWE has managed to take a naturally charismatic and likable guy in Rich Swann and have him wrestle to practically zero reaction. I don’t get the fascination with Dar. Once you get past the way he pronounces Alicia Fox’s name, what else is there?

After the match, Alicia Fox comes out and starts smiling and skipping to the ring. She tries to get a “yes” chant going then hugs Dar and lifts him up as they are now reunited. Great.

Final Thoughts: This was not the strongest episode in the history of 205 Live. I liked the Gulak/Ali stuff but the main event was dull and the Tozawa/Kendrick feud is played out. Plus, this show does not need any more Alicia Fox storylines as the angles they have with her have all been terrible. And that’s not her fault but rather the poor segments the company produces. Oddly enough, all of the heels won the matches too. There was not a lot worth watching this week.