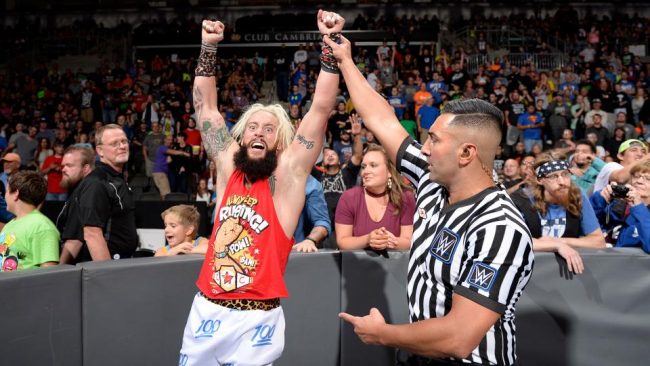 September 5, 2017
From the Denny Sanford PREMIER Center in Sioux Falls, SD
Your hosts are Vic Joseph and Nigel McGuiness

The show starts off with pretaped comments between all five competitors in the #1 Contender Elimination match.

Daivari is shown in an insert promo before the match as he talks about inflicting pain on TJP for what he did to him last week. Rich Swann comes out with popcorn and sits on the announcers table. Daivari beats on TJP to start. TJP comes back and takes Daivari outside in a move that was completely mistimed by Daivari. Back inside, Daivari cuts off a crossbody attempt and hits a draping inverted DDT for a two count. Backbreaker gets two. Daivari uses a surfboard but TJP flips out and kicks Daivari down. TJP hits a springboard forearm then runs wild for a bit. Daivari avoids a Detonation Kick and gets two with a running knee smash. He kicks TJP outside then jaws at Swann before rolling TJP into the ring. Daivari heads up top but misses a frog splash then TJP hits the Detonation Kick for the win (4:02) *1/2. After the match, Swann gets in the ring and has some fun with TJP then says he will see him next week as the announcers wonder whether or not they will have a match.

Thoughts: Not a good showing here, particularly by Daivari. He usually is fine technically but very bland as a performer. Anyway, they are setting up for the 3rd match between Swann and TJP with Daivari just a pawn in their feud.

Clips of last week’s Jack Gallagher vs. Brian Kendrick No Holds Barred match that was won by Kendrick.

Drew Gulak is backstage passing out pamphlets for a better 205 Live before his match against Akira Tozawa.

Next week, we will see TJP vs. Rich Swann

Gulak is now in the ring. He tells us about making a better 205 Live and despite his struggles and sacrifices, he was stifled by the WWE and kept out of tonight’s #1 Contender Match. Gulak says that people fear what they do not understand and excitedly tells us about a Power Point presentation he has made that shows us a better 205 Live. His first proposal is no jumping off of the top rope and the second is no jumping off of the middle rope, which is showboating at his second worst. However, Tozawa interrupts before we can see the third slide. I give Gulak all of the credit in the world for his commitment to this character. He really is making it work.

No Titus O’Neill here. After some back-and-forth action, Tozawa sends Gulak into the corner with a dropkick. Gulak rolls outside to avoid a possible senton but is eventually able to send Tozawa into the barricade from the apron with an Iconoclasm. Gulak rolls Tozawa inside and talks some trash before applying a chinlock. He switches to a surfboard then beats on Tozawa in the corner. Tozawa fights back but Gulak cuts him off and uses a few holds on the mat. Tozawa snaps off a hurricarana then boots Gulak off of the apron before flying out with a tope. Back inside, Tozawa covers for a two count. He gets the crowd chanting with him then hits a Saito suplex that gets two. He climbs up top but Gulak avoids a senton and uses a rollup for two but after that gets caught with a roundhouse kick then Tozawa hits a flying senton for the win (6:39) **1/2.

Thoughts: Good action while it lasted and I wish they had more time in the ring. I really do not know what you do with Tozawa at this point. Maybe turn Gallagher heel and have them feud?

Dasha Fuentes is backstage with Enzo. She asks him about being part of the Cruiserweight Division and working smarter while the rest work harder. Enzo puts over the athleticism of the division but that he has the gift of “gab and jab” and its his destination to become the Cruiserweight Champion. He runs down the other competitors in the Fatal Five Way match but Neville interrupts. Neville says 205 Live is for real competitors and serious athletes, neither of which is Enzo, but Enzo tells Neville this is not “Game of Thrones” and the belt will be around his waist at No Mercy. They are certainly setting up a future match between these two.

Everyone stares at Enzo, who ducks outside, then the others start fighting. Enzo is sitting their talking to fans then we are left with Metalik and Alexander in the ring, who work a fast-paced sequence. Nese pulls Metalik outside as he goes in after Alexander but Enzo also pulls out Kendrick. Nese lands a few kicks but Alexander fights back. Nese catches Alexander on his shoulders and hits a gutbuster. Enzo sneaks inside and almost rolls up Nese while holding the tights. Kendrick catches Enzo with an uppercut from the floor then suplexes him outside. Back in the ring, Nese beats on Enzo. He gets a nearfall with a backbreaker then Kendrick comes in to beat on Enzo too. Enzo starts to fight back and throws some punches that look awful but eats a double super kick. Alexander and Metalik fly in with springboard attacks then Alexander catches Metalik with a Spanish Fly as everyone is down. After that we get a Tower of Doom spot then Nese & Kendrick catch a tope from Enzo and dump him on the announcers table as we see Neville watching backstage. Nese tosses Enzo over the table into the barricade then talks with Kendrick, who is devising a plan. Kendrick then attacks Nese from behind but gets taken out by a dive from Metalik. Nese turns Metalik inside out with a lariat then rolls him inside for his running knee smash but Alexander catches him with the Lumbar Check for the first elimination (11:42). Alexander drags Metalik into the middle of the ring and covers him a few times but cannot put him away. Kendrick runs inside but Alexander takes him out with a handspring enziguiri then catches Metalik with the Lumbar Check after a reversal sequence for the second elimination (12:56). Kendrick sneaks back in and hits Sliced Bred #2 for a nearfall then locks on the Captain’s Hook. Alexander escapes but Kendrick puts the hold on again. He reaches the ropes and takes Kendrick outside then catches and drops him on the apron before heading inside where he puts him away with the Lumbar Check (14:47). Enzo then sneaks back in behind Alexander and rolls him up and grabs the tights for the win (14:52) ***1/2. The announcers are shocked than Enzo won and will be heading to No Mercy against Neville for the Cruiserweight Championship. After the match, Enzo is celebrating with the fans while Alexander is shaking in disbelief.

Thoughts: Enzo winning is not a shock since they’ve been teasing a match with Neville since he arrived in the Division. They put over Alexander strongly in defeat as he eliminated three people with his finishing move and shined in other parts of the match too so I expect that he will also get a title shot down the line and since the company is on a kick of having multi-person matches then it could possibly happen as soon as No Mercy. This match was all action and fun to watch.

Final Thoughts: The main event is worth checking out but there was nothing else you really needed to see on this show. Next week we will see TJP vs. Swann, which should be good based off of their previous matches, and I’m sure we will get more segments with Enzo to hype up the No Mercy Cruiserweight Championship match too.