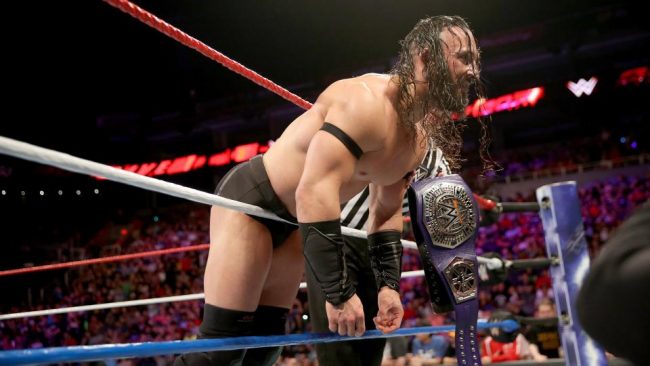 July 4, 2017
From the Talking Stick Resort Arena in Phoenix, AZ
Your hosts are Vic Joseph and Corey Graves

Titus O’Neill is backstage on his phone talking to Akira Tozawa. He does Chris Tucker’s “Do You Understand the Words Coming out of my Mouth” bit and keeps stopping to talk to Ariya Daivari and Mustafa Ali then mocks Tozawa’s chant and does the gator bark to pump everyone up.

The announcers run down the show as we will see Jack Gallagher vs. Tony Nese and Rich Swann vs. TJP.

Titus is now in the ring, which is set up with a “Titus Worldwide” platform and pictures of both competitors in Sunday’s Cruiserweight Championship match. Titus puts over Tozawa but Neville comes out to the stage. He laughs and tells Titus he is a charismatic leader. However, the problem is that all of what he’s doing with Tozawa is nothing more than a fantasy then shows us a clip of last night when another Titus client, Apollo Crews, got destroyed by Braun Strowman. Neville then accuses Titus of feeding his clients to the monster as the crowd chants “You’re not Strowman” to Neville, who tells Titus he only cares about money. Neville says he can either prove him wrong and show compassion by forfeiting the match or he can sit on commentary and watch him destroy Lince Dorado tonight, which will be a preview of what happens to Tozawa this Sunday.

I liked how Titus pumped up the crowd. Neville was excellent here as he accused Titus of purposely giving his clients false hope, which gets them hurt, so he can make money. Neville’s heel work is so, so great.

Titus joins on commentary. Neville works a side headlock on the mat as Titus says he looks out for his clients best interest. Lince gets two with a sunset flip then hits a dropkick. He lands on his feet after a German suplex attempt and uses another pinning combination for a nearfall. Lince takes Neville down with a monkey flip as Titus rags on Joseph. Neville blocks a monkey flip in the corner but Lince takes them both outside then hits a hurricarana off of the apron. Neville sidesteps a charge and sends Lince over the steps the brings in near the table and rams Lince’s head before staring at Titus, who is yelling at Neville that Tozawa will beat him on Sunday. Back inside, Neville points at Titus then hits a powerbomb before putting him away with the Rings of Saturn (3:57) **.

Thoughts: Good action while it lasted. They gave Lince some hope but at the end Neville was put over strong. Neville constantly staring at Titus throughout the match was great.

Swann is backstage and asks TJP why he requested this match as they are friends. TJP says he thought about what Swann said about taking shortcuts and that he will go back to what made him win the CWC and thought some friendly competition would help. They shake hands after that as Swann leaves while TJP finishes taping his wrists.

We are shown a clip of last week when Brian Kendrick dressed up as Gallagher and called him a pathetic joke before attacking him with an umbrella during their match.

Nese got a tan this week. He overpowers Gallagher to start but Gallagher comes back with several rolling pinning combinations. Gallagher works a side headlock but Nese picks him up and hangs him in the ropes. Nese lands some punches then hits a body block for two. He then places Gallagher in the tree-of-woe and hits a dropkick before kicking Gallagher in the face while doing crunches. Nese puts Gallagher in a backbreaker submission then squeezes him together but Gallagher escapes. He hits Nese with a knee smash and a dropkick before getting two with a suplex. Gallagher tries an armbar but Nese locks his hands then lifts up Gallagher but that is turned into a sunset flip for a two count. Nese takes out Galagher’s knee and lands on his feet after a moonsault and clutches his knee in the corner. Nese tries a sneak attack but Gallagher was ready and headbutts Nese before putting him away with a shotgun dropkick (6:02) **3/4.

Thoughts: Good action as Gallagher does not let Nese take advantage of his gentlemanly nature and gets the win as both of these guys have a victory over each other. Nese is an underrated talent who has been delivering in the ring while Gallagher is one of the most over guys in the entire division.

After the match, we hear music and on the screen we get the “History of Great Britain” as Kendrick is dressed up as someone from colonial England then lists off all the times the British lost battles and wars, comparing it to how Gallagher will lose to him as he wants to get Gallagher out of the company. I have no idea what they are going for here with Kendrick dressing up but it did not work at all.

Highlights from last night on RAW with Cedric Alexander beating Noam Dar then telling both Dar & Alicia Fox that he is done dealing with him.

We now see the trainer backstage with Dar, saying his neck is fine and he does not need a neck brace. Fox comes in as Dar tells us how tough it was without her but now that she is back he can win the Cruiserweight Title. Fox asks him about Cedric but Dar says its finished. However, Fox says its not over until Cedric literally quits 205 Live. She smiles on Dar’s shoulder as he can’t believe his woman wants this to continue. This awful feuds needs to end. If I’m Cedric, I am going up to Vince and saying he will bulk up to get out of this division and away from Dar & Fox, the albatross around the neck of 205 Live. Its currently the worst feud in wrestling today.

The match starts off with Swann working the arm. TJP takes Swann down with a headscissors and works that on the mat for a bit. Swann hits a dropkick after a fast-paced Irish whip sequence then teases a dive outside and instead mocks TJP’s dab. Swann takes TJP down with a drop toehold then grabs an armbar. TJP then backdrops Swann to the floor and goes out for the attack but instead rolls back inside to give Swann a chance to get back inside. Swann just beats the ten count then TJP applies an armbar. He pulls back both arms as he yells at Swann to give up. TJP appears hesitant as Swann seems hurt then goes back on the attack after Swann shoved him back. TJP gets two with a slingshot senton then uses a Muta Lock. Swann is able to reach the ropes then TJP stands back before pulling him back into the center of the ring. Swann flips out and hits a pair of clotheslines before taking TJP off of the top with a hurricarana. Swann gets two with a rolling frog splash then comes back with a Falcon Arrow for two. A “this is awesome” chant breaks out as Swann goes to the middle rope. He flips off then TJP hits him with a forearm and starts to show off but is drilled with a roundhouse kick as both men are down. They have a reversal sequence that ends with TJP hitting a chicken wing gutbuster for two. He sets up for the Detonation Kick but Swann rolls off his shoulders so TJP puts on a knee bar. Swann reaches the ropes and lands as few kicks but runs into a spinning heel kick then both men kick each other down. They get up as TJP lands a pair of uppercuts then have a pinfall reversal sequence that ends with Swann getting the win (12:12) ***3/4.

Thoughts: Excellent match. They are doing something interesting with TJP as he is currently a conflicted character as he is fighting the urges to take these shortcuts but wants to win in the worst way while not hurting his friend. Anyway, the action here was tremendous and I did expect a turn by TJP at some point tonight but it did not happen. This is a match to seek out.

After the match, Swann extends his hand then TJP hugs him and walks away, clearly unhappy over losing. Swann celebrates on the ring

Final Thoughts: Overall, a good show tonight. The main event was great and they’ve built up the Cruiserweight Championship match at Great Balls of Fire well too. Sure, the Dar & Fox/Cedric feud is one of the worst in recent memory and I have no clue what they are trying to do with this Kendrick/Gallagher feud but the action on this episode was better than usual.