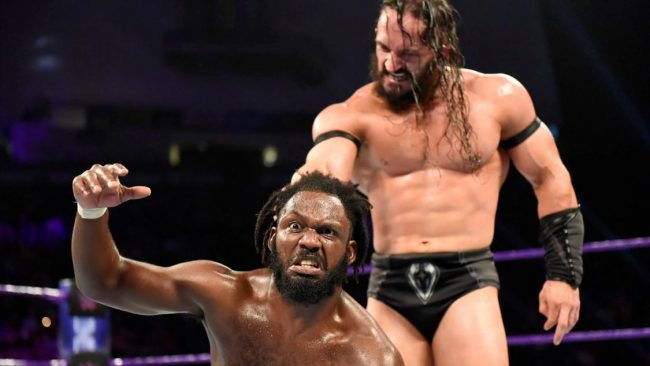 June 20, 2017
From the Nutter Center in Dayton, OH
Your hosts are Vic Joseph and Corey Graves

Akira Tozawa and Rich Swann are in the locker room. Swann says its a big night for him as he has a match against Neville tonight and can get back into the title picture. Titus comes in and tells Swann to do something about his hair so he can talk to Tozawa. Titus puts over his win against TJP on RAW last night and says he will help take the Titus Brand International as long as he signs the contract. Tozawa doesn’t move as Titus tries to sweeten the deal with an extra 5% on merchandise then promises to give him a deal he cannot refuse next Monday night on RAW.

The announcers tell us that tonight is a night of grudges with Neville vs. Swann, Mustafa Ali vs. Drew Gulak, and Jack Gallagher vs. Tony Nese.

We are shown a clip from last week with Austin Aries telling us he is not medically cleared to wrestle, leading to Tony Nese interrupting with Jack Gallagher coming out to Aries’ defense.

Nese flexes his bicep after backing Gallagher against the ropes. Gallagher stands on his head in the corner then kicks down Nese before putting himself into a pretzel as Nese stops in his tracks, allowing Gallagher to take him down. Nese comes back with a clothesline to the back of Gallagher’s neck then takes control of the match. He puts Gallagher in the tree-of-woe then drops down and does some ab crunches while kicking Gallagher in the face. Gallagher fights back and hits a dropkick and a butterfly suplex that gets two as Aries is watching backstage. Both men are down after Gallagher hits a headbutt then Nese misses a charge and rams his shoulder into the post. Gallagher then talks to the ref and expresses concern as Nese appeared injured but Nese attacks Gallagher from behind and puts him away with a running knee strike in the corner (4:59) **.

Thoughts: The action was fine for what it was as the story is Gallagher lost due to the fact he was a gentleman. Nese also gets a much needed win and seemed to actually have a heel act this time with his constant taunting and arrogance. He’s been really good in the ring since the division has started and at least having a feud on 205 Live would help.

Backstage, Noam Dar is face-timing with Alicia Fox. Cedric Alexander interrupts and talks about how he keeps saying he has moved on and its over but Fox tells him its over when she says so then Dar tells him to quit 205 Live or else they’ll make his life a living hell. Dar then smiles and tells Cedric to fetch his bag at the bottom of the lake but Cedric picks up his bag as Dar tells Fox he thought she said the bag was silver. Ariya Daivari then comes in after Cedric leaves and asks Dar if he has seen his $15,000 bag his father gave him. This was not good. The Dar/Fox/Alexander stuff is terrible and the end with Daivari was more lame than amusing. Daivari is just bland in every single way.

We get a video package on the Gulak vs. Ali feud to hype up their match tonight.

Gulak comes out with a mega phone for his entrance as he tells us about wanting ground-based offense and a good wristlock instead of 450 splashes as he wants to work together with Ali to make a better 205 Live as the crowd boos. Ali dropkicks Gulak outside then flies out with a corkscrew splash before they head inside where the ref finally rings the bell after checking on Gulak. Ali hammers away in the corner then gets two with a crossbody. Ali sits on the ropes but Gulak shoves him out to the floor and yells “there’s your high-flying.” Back inside, Gulak works the arm as Corey tells us Gulak fancies himself in the style of George Hackenschmidt and Karl Gotch. Gulak stays in control and gets two with a hammerlock slam. He hits another slam as Ali kicks out of that too then Gulak goes back to working the arm. The crowd rallies behind Ali, who escapes and runs wild. He hits a dropkick then Ali hits a running double knee smash. Ali kicks Gulak down then hits a rolling neckbreaker before heading up top but Gulak catches him and tries to turn him over for a Boston Crab but Ali counters with a rollup and gets the win (4:43) **1/4. After the match, Gulak is seething.

Thoughts: This did a good job at advancing their feud. After losing last time due to high-flying, Ali surprised and beat Gulak on the ground with a counter into a rollup to give Gulak a taste of his own medicine. The way Gulak sold defeat here was really good too.

Gallagher is walking backstage where Aries tosses him a towel. Aries says it was a tough loss as Gallagher appreciates his sincerity but Aries says he also tried being sincere and has watched guys like Neville and TJP cut corners and think they might take a page out of their book. Aries proposes he will have Gallagher’s back then the two shake hands as an alliance has been formed. Seeing how these two are out of the title picture and showed chemistry together, I welcome an alliance between them.

We get a clip from last week on RAW when Neville ambushed before their match began. After that we see Swann walking backstage where he sees TJP, who tells him he did not appreciate what Swann did last week in not liking how he has been carrying himself as it messed with his head before his match. Swann said he was never trying to get into his head then TJP tells Swann to go out and take care of business. I assume this leads to a future feud between the two.

Akira Tozawa comes out to sit ringside, courtesy of the Titus Brand. Luckily he is wearing a suit that is actually tailored to his size this time. There is a purple rope with a small table that has a cup and bag of popcorn.

Before the match, Neville gets in Tozawa’s face and holds up the Cruiserweight Championship. These two slug it out when the bell rings. Neville grounds Swann with a side headlock but Swann escapes and hits a dropkick. Swann now works a side headlock until Neville backs him against the ropes. Swann takes Neville down after a fast-paced sequence then Neville asks for time on the apron but gets dropkicked to the floor. Swann tries a dive but Neville runs and cuts him off. Swann blocks a superplex attempt and ends up kicking Neville off of the top rope before flying out with a somersault plancha. Back inside, Swann has Neville backed against the ropes. Swann hits a kick but Neville got his knees up on a splash then tosses Swann outside. Swann gets rammed into the barricade then Neville roughs him up some more while taunting the fans who are booing him. Back inside, Neville works a chinlock but Swann escapes. Neville rolls out and Swann follows where they brawl until Swann gets pancaked on the announcers table. Back inside, Neville stalks Swann from the top rope but Swann falls down and gets out of striking distance. Neville pulls Swann up by the air but Swann pumps up and hits a super kick as both men are down. Swann is up first and hits a flurry of kicks but Neville is able to kick out. A “this is awesome” chant breaks out as Swann stays in control. He almost puts Neville away with a Michinoku Driver then heads up to the middle rope but Neville cuts him off. Swann kicks him down but misses a Phoenix Splash then Neville locks on the Rings of Saturn and Swann eventually taps out (10:41) ***1/2. After the match, Neville stares down Tozawa from the middle rope and holds up his title.

Thoughts: Very good match. The fans got into this one as Swann had a solid showing with a nice final flurry of moves at the end while Neville kept the fans interested with his heel antics. I also liked the staredowns between Neville and Tozawa, who sat their calmly.

Final Thoughts: Overall, a decent show. The main event was quite good and they seem to be building new storylines and feuds. The only thing bad is the fact we are still getting more of Dar & Fox vs. Cedric but hopefully that ends soon.