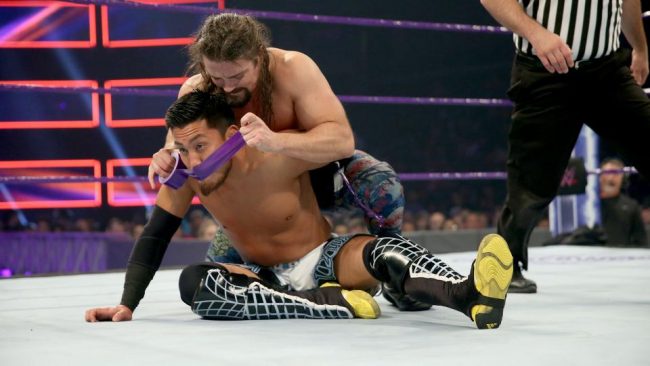 May 23, 2017
From the Huntington Center in Toledo, OH
Your hosts are Tom Phillips and Corey Graves

We start off with a promo from The Brian Kendrick, who essentially narrates his feud with Akira Tozawa but put over their “Street Fight” that will happen on the show.

This match was the result of last week when Swann sent a package that exploded powder to Daivari, who got pissed off as it ruined his shirt. Daivari shoves Swann, who responds with a kick then hammers away. Daivari bails but Swann takes him out with a baseball slide then rolls him inside as Daivari begs for mercy. Swann doesnt fall for his tricks and hits a dropkick as Daivari heads back outside. Swann slingshots out but Daivair dodges the attack and rams Swann into the apron. Back inside, Daivari works the arm. He cuts Swann off with a high knee for a two count then goes back to the arm. Daivari gets two with an armbreaker then applies a cobra clutch. Swann escapes but Daivari catches him with a neckbreaker. He clutches his arm then connects with a roundhouse kick but Daivari is able to kick out. Swann then heads up top and gets the win with a Phoenix Splash (6:30) **. After the match, Noam Dar runs out and attacks Swann from behind as Alicia Fox cheers. Swann is out on the floor as Dar & Fox celebrate in the ring.

Thoughts: Bland match. Daivari just does not bring anything to the table. He’s dull in the ring and has a generic character. Swann is one of the most naturally charismatic and likable guys in the company yet he’s stuck in an awful feud against Dar and Fox, which might feature Sasha Banks after what we saw happen Monday night on RAW.

We get a lengthy video package on the feud between Austin Aries and Neville to hype up their Submission Match at Extreme Rules.

The announcers are now interviewing both Neville and Aries via satellite. Neville puts himself over and believes Aries has had enough chances at his title. Aries reminds Neville how he has cheated in all of their matches to retain the title as Neville decries that as slander. Aries then gives Neville more “truth” and that he is not the first person trying to prevent him from getting what he wants and has been down this road before and will do it now on his hurt leg. He then promises to show Neville his whole catalog of submission holds to use and will make him tap to the Last Chancery. Neville then tells Aries he is the King of the Cruiserweights and for Aries to walk away because he will not be held responsible for what he does at Extreme Rules. I thought this was a strong segment in hyping up the PPV. Both men did a fine job here.

Cedric catches a kick then drills Boone with an elbow smash. Boone rolls outside and refuses to get in so Alexander runs out and chops him down. Back inside, Cedric hits a springboard clothesline and finishes off Boone with the Lumbar Check (1:32).

Thoughts: A good showcase for Cedric, who was excited to be back and also acted a lot more aggressive than usual. His return is a welcome one to the Cruiserweight Division.

We get a replay of last week where Drew Gulak attacked Mustafa Ali before his match against Tony Nese. This leads to a promo from Gulak, which is set up like a mock political ad, where he talks about he does not think of showboats and showoffs, who take risks to get a little bit of applause. He talks about if he wants to see that, he’d just see Cirque de Soleil, and wants us to stand behind him and his cause. Gulak has been entertaining me in this role but this was not his greatest work. Still, they’ve built up his feud against Ali quite well.

Apparently, you have to win this match inside of the ring. These two have a staredown to start. Kendrick bails and heads underneath the ring but Tozawa flies out with a tope then does his chant. Kendrick sends Tozawa into the announcer’s table but ends up getting hip-tossed over the announcers table. They head back inside where Tozawa gets a two count. Senton gets two. Tozawa stays in control but gets low-bridged and spills outside. They both pull out a table from underneath the ring but head inside where Tozawa snaps off a hurricarana. Kendrick is knocked outside then Tozawa tries for a tope but Kendrick tosses his jacket in his face and hammers away. Kendrick suplexes Tozawa onto the floor then grabs some purple tape. They fight in the ring and Kendrick puts the tape over Tozawa’s mouth and puts on the Captain’s Hook. Tozawa reaches the ropes and pulls himself up and is able to dump Kendrick outside when he tried Sliced Bread #2. Tozawa yanks the tape off of his mouth as both men are down. Tozawa kicks Kendrick in the face and they fight up the ramp where Kendrick sends him into the LED board. Kendrick then brings Tozawa back to ringside and sends him into the steps. He grabs the tape and tapes Tozawa’s hands around the post then whips him in the back with his belt. Kendrick slides the table over near Tozawa and sets that up but Tozawa got himself free then starts to beat Kendrick with the belt. Tozawa whips Kendrick in the back while in the ring and heads up top but Kendrick dodges the attack and puts the Captain’s Hook back on as Tozawa gets to his feet and takes Kendrick outside with him. They fight near the steps then on the steps where Tozawa tosses Kendrick off as both men are down. Tozawa ends up hitting Kendrick with a Saito suplex on the floor then after a struggle DDT’s him on the steps. Tozawa starts chanting and the crowd responds then he places Kendrick on the table and climbs up top of the post and puts Kendrick through it with a senton. Tozawa rolls Kendrick back inside and gets the win (14:50) ***3/4.

Thoughts: Really good match where both guys came off as actually hating each other. With the win, I expect Tozawa to move on to bigger things such as the Cruiserweight Title. His chants continue to get over more and more with each passing show too. While I thought this feud ran a bit long, it ended with a bang.

Final Thoughts: Overall, the main event made this a good show. I also liked some of the production changes here such as the opening bit with Kendrick narrating his feud and the satellite interview with both Neville and Aries. Even the Gulak bit was different than the norm. The Dar & Fox pairing is just a drag though and really needs to wrap up soon. Whoever feuds against them ends up getting under as opposed to getting over. For those looking for a breezy show to watch, 205 Live has been solid.