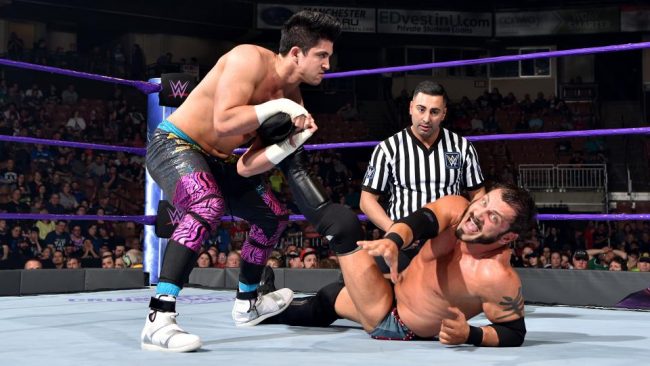 May 16, 2017
From the SNHU Arena in Manchester, New Hampshire
Your hosts are Tom Phillips and Corey Graves

We are shown highlights from RAW last night where Neville tells TJP they will take care of their Austin Aries problem on 205 Live when TJP faces Aries. TJP talks about being one step closer to a Championship match.

Dasha Fuentes is backstage with Aries. He then conducts the interview himself and calls TJP Neville’s “lap dog” and will never get that title shot.

Metalik backs Dar into the corner to start. Dar gets a kiss from Fox then locks up again as Metalik takes him over with an arm drag. Metalik hits another arm drag and follows with a dropkick as Dar rolls outside. Dar uses Metalik as a shield and heads back inside then stomps Metalik and goes to work. Metalik fights back and takes Dar down with a tilt-a-whirl headscissors that Dar messes up. Metalik then takes Dar down on the outside with a quebrada from the top rope but is distracted by Fox on the apron and that allows Dar enough time to kick him off. Back inside, Dar works the arm for a while. Metalik comes back with a suplex as both men are down. Metalik fights back and hits a back elbow smash and tries for the Metalik Driver but Dar hangs on to the ropes and kicks out Metalik’s leg then goes back to attacking the arm. Metalik fights back and hits a ropewalk elbow drop for two. Dar ends up kicking Metalik off of the middle rope then hits the Scottish Supernova for the win (9:12) **1/2.

Thoughts: Solid match. Nice to see that they finally brought Metalik back to 205 Live. He is one of the fastest performers in the ring and the crowd reacted well to his moves. Dar gets the win as he is being pushed but I hope this means Metalik is here to stay instead of languishing on Main Event.

We are shown clips off The Brian Kendrick attacking Akira Tozawa after getting pinned last week to set up next week’s street fight. Dasha then interviews Kendrick as he says the match stipulations suits his plans well as everything is legal and there are no limitations. He then mocks Tozawa’s chants before saying he hopes Tozawa has remembered all of his lessons. This feud needs to be blown off and I’m happy its happening sooner rather than later.

A video to hype Cedric Alexander’s return, which will happen next week.

Tony Nese and Mustafa Ali are supposed to have a match. However, Drew Gulak runs out and attacks Ali from behind on the apron. He kicks the crap out of him and yells that he “knows better” and that Ali will learn one way or another that risks do not pay off as he rolls him inside and holds him by the hair in the corner as Nese hits a running knee smash. We are shown a replay of the attack then Gulak stands in the ring with his “No Fly Zone” sign as he looks at Ali, who is out on the mat. The attacked looked really good as Gulak was aggressive and Ali sold the offense quite well. This feud is heating up and I’ve been enjoying it a lot. Hopefully, both men get over more as a result.

Backstage, Dasha is with Rich Swann. He wants to get as far away from Fox & Dar as he can but someone comes up with a package. Swann says its not for win though and points at Ariya Daivari, who is looking at a mirror. He yells at the guy then says its his $2,500 Persian sunglasses that were manufactured in Abu Dhabi. He takes the box and sets it down and walks away but Jack Gallagher walks over and picks it up. Daivari comes back and yells at the “common street trash” to put it down then opens up the box as powder explodes in his face. Daivari flips out and says it ruined his $1,500 shirt. Looks like they are setting up an eventual feud between Daivari and Swann. Daivari sold the prank well enough but this current character of his isn’t caught on yet. I also do not see any standout quality from Daivari.

Phillips lets us know that Ali has been taken to a local medical facility and we will get an update later on tonight.

Aries tosses TJP’s jacket in his face as TJP bails. Back inside, Aries takes control. He continues to limp a bit to sell the effects from last night. TJP rolls outside to avoid the Last Chancery but Aries flies out with a pescado. Back inside, TJP is able to target the knee then he hangs him up on the top rope as the ref has to take him off. TJP starts stomping the knee then stays on the attack. TJP taunts the crowd and gets booed then dabs and is booed again but Aries fights back. TJP takes Aries back down with a Dragon Screw then hammers away on the mat. Aries catches TJP with a back elbow smash then makes his comeback. He gets two with an elbow smash to the back of the neck but TJP kicks his knee as Aries falls to the floor. TJP hits the wrecking ball dropkick then rolls Aries back inside for a two count. The crowd gets behind Aries as TJP almost puts him away with a reverse rollup while grabbing on to the tights. Aries fights back and takes out TJP with a tope to the floor. Back inside, Aries heads up top as the crowd is behind him but takes too long as TJP cuts him off. TJP tries for a superplex but Aries blocks that with a bell clap then misses a missile dropkick as TJP hits a chop block then puts on the knee bar. Aries desperately tries to get to the ropes but TJP is holding the ropes with his hand until the ref sees him and breaks it up. TJP sets up for the Detonation Kick but Aries holds the ropes and takes TJP down with a sunset flip and turns that into the Last Chancery for the win (12:26) ***1/4. After the match, Neville comes out and attacks Aries then targets the knee. He puts Aries in a leg lock and grapevines the leg until Gallagher runs out and makes the save as he whacks Neville with his umbrella before taking him down with a headbutt. Gallagher checks on Aries as Graves wonders if Aries will be able to face Neville at Extreme Rules.

Thoughts: Good main event. The crowd was into this match a lot and both guys did a fine job. It also continued the storylines going on between all four men involved as I expect another tag match between them in the future.

Final Thoughts: Overall, I thought this was a solid show. It had a quality main event and everything felt focused. This was one of the best crowds for the show too and the main event came off like a big match. I’d definitely seek this show out.