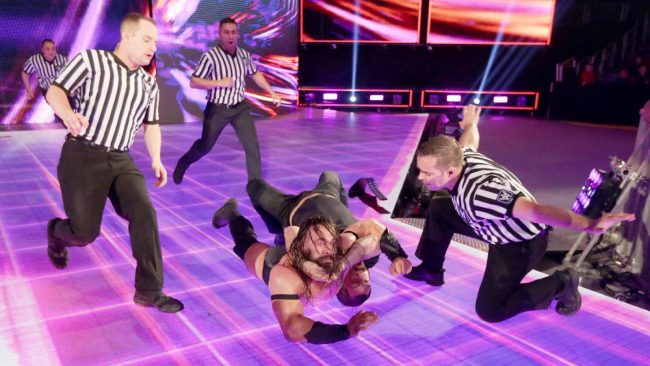 April 25, 2017
From the Wells Fargo Arena in Des Moines, IA
Your hosts are Tom Phillips and Corey Graves

The show starts off with a video package highlighting the past few weeks with TJ Perkins becoming a protege of Neville, who continues to feud with Austin Aries. It also leads to tonight’s non–title main event of Neville vs. Jack Gallagher.

Kendrick & Tozawa get jumped before the bell but end up clearing the ring and take out their opponents with dives. They celebrate then head back inside as the match officially begins. Swann beats on Kendrick and gets a two count with a somersault leg drop to the back of the neck. Dar cuts Swann off of the top rope behind the referee’s back as Kendrick takes control. Dar tags in and works the arm for a bit as the heels cut off the ring. Kendrick hits a suplex for two then works a bearhug for a bit. Swann escapes but Kendrick cuts off a tag attempt. Swann fights Kendrick off but Kendrick gets up first and knocks Tozawa off of the apron. Swann gets whipped into the corner then knocks Tozawa off of the apron. Kendrick prevents another tag then tags in Dar but Swann kicks him and makes the tag. Tozawa goes nuts in a fast-paced sequence then heads up top after a Saito Suplex. He rolls through a dive then Kendrick grabs a hold but Dar accidentally hits Kendrick instead then Tozawa nails Dar with the Shining Wizard for the win (5:24) **1/2. After the match, Tozawa gives Kendrick lesson #4, which is to always choose wisely.

Thoughts: Fun opening match. The Swann & Tozawa pairing could get over if they let their personalities shine as both guys have a lot of charisma. I am enjoying the Kendrick and Tozawa feud too as Kendrick has been getting his comeuppance over the past few weeks. A Dar/Swann feud is not much to get excited about but hopefully it means the end of Alicia Fox on this show. I don’t necessarily hate her character but its better served on RAW in the Women’s Division than with the Cruiserweights. The angles involving here not only failed to get anyone over but you could argue they got everyone involved under.

Dasha Fuentes is backstage with Neville and asks him about his match tonight against Jack Gallagher. Neville said he has beaten Gallagher before and tonight will be no different as he hopes Aries is watching. He then said besides TJ Perkins, there is no one else even close to being on the “Neville Level” then declares himself as the King of the Cruiserweights.

We get a clip from last week where Drew Gulak distracted Mustafa Ali in his match against Ariya Daivari with his “No Fly Zone” sign as he wants all high-flying to be banned from 205 Live.

Gulak comes out before the match wearing a suit and holding up his sign as he speaks through a megaphone and chants “I’m not lying, no high flying” and gets a scattering of boos before joining on commentary. Nese overpowers Ali to start then poses as Gulak is on commentary saying the high-flying style is being abused and encouraged on 205 Live and is looking for out the well being of everyone as its an unnecessary risk. Ali gets the best of Nese and mocks him with a bicep flex. Ali catches Nese with a spin kick then slides out and chases Nese around and back into the ring but Nese runs him over. Nese then turns Ali inside out with a clothesline then holds him up with one arm for a delayed vertical toss on the top rope. Nese stays in control for a bit until Ali comes back with a wheelbarrow bulldog as both men are down. Nese gets up but Ali blocks an attack and fires away. He hits a dropkick then flips out of the corner to avoid a charge and comes back with a crossbody for two as Gulak calls that extremely dangerous. Ali staggers Nese and hits a slingshot neckbreaker then runs across the apron and flips over the post to take Nese out with a senton. Back inside, Ali hits a tornado DDT and heads up top but Gulak pulls Nese outside and the ref rings the bell for the DQ (7:27) **3/4. Nese is pissed as Gulak calms him down. Gulak congratulates Nese as he walks away then claps but Ali is perched on the top rope and waits until he turns around to hit a somersault senton, which looked great. Ali then chases Gulak into the ring but Gulak is able to escape and head up the ramp.

Thoughts: Solid action in this one. The finish was a little bit lame but this was all about putting over the Ali/Gulak feud. I have to admit that Gulak is amusing in this current role and Ali is someone who has looked great in the ring and started getting some cheers towards the end. I think they have something with Ali and I hope this feud gives him some momentum. Nese gets screwed over yet again and I have to think its going to lead to a babyface turn sometime soon. He is another person who looks good in the ring each time out.

We see Aries talking to Gallagher in the locker room as he leaves while Gallagher curls his umbrella like its a dumbell.

The announcers put over how Neville has not lost a match since October and put over the momentum he has right now. Neville bails after Gallagher hits a dropkick then grabs his umbrella and tosses it up the ramp. Gallagher then takes Nevllle out with a tope before sliding Neville back inside. They break against the ropes but Neville kicks Gallagher low to take control of the match. He heads up top after a slam and connects with a missile dropkick for a nearfall. Neville puts on a side headlock then hits a snap suplex as Gallagher gets to his feet as that gets two. He then yells at the crowd as they start a mild chant for Gallagher. Neville continues to rough up Gallagher and gets two with a basement dropkick before going back to another side headlock. Gallagher gets up and manages a quick rollup for two. Neville ducks his head for a backdrop and gets kicked as Gallagher follows with a dropkick. He hits a suplex and follows with some uppercuts before getting a nearfall with a dropkick. Neville cuts Gallagher off and gets in his face but ends up eating a dropkick. Neville starts laughing so Gallagher takes him down with a headbutt as that almost gets the win. Gallagher tries a butterfly suplex but Neville counters. Gallagher finally hits the suplex and tries for a super back suplex but gets hit with a palm strike to the face. Neville then stomps Gallagher in the back of the neck and beats him down in the corner before locking on the Rings of Saturn for the win (10:51) ***1/2.

Thoughts: Really good match. I’d say its just below their match several weeks ago at Fastlane but still worth watching. Neville’s heel work was superb, both in the ring and how he yelled at the fans. His transformation into his current character has been remarkable. Gallagher is a blast to watch each time out as well and was also over with the fans.

After the match, Neville attacks Gallagher on the ramp and drags him halfway up and puts him back in the Rings of Saturn until Aries makes the save and puts Neville in the Last Chancery. A nice way to hype up their title match at Payback.

Final Thoughts: I thought this was a really enjoyable episode. The action was good and the feuds being pushed were all entertaining here. This crowd was at least a bit more lively than what we saw last week but its still an issue and not being helped by the fact its taped after Smackdown. Regardless, this episode breezed by and its worth checking out.