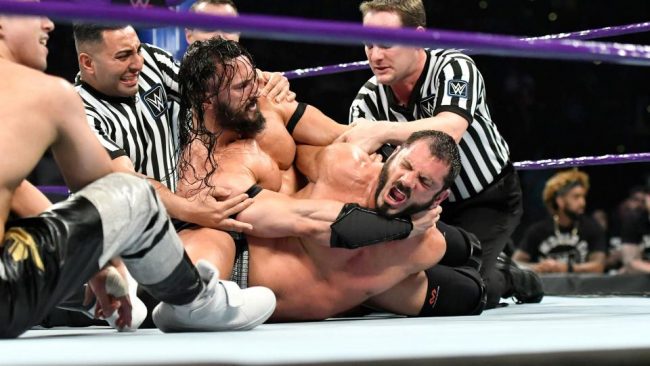 April 18, 2017
From the KFC Yum! Center in Louisville, KY
Your hosts are Tom Phillips and Corey Graves

We are shown a video package showing the events that lead to tonight’s main event between TJ Perkins and Austin Aries.

Nese shoves Tozawa into the corner then gets down on one knee and flexes his bicep. He pie-faces him after a break and sends Tozawa outside but Tozawa comes back in and hits a chop. Nese bails for a breather then Tozawa chases him in and fires away. He gets two with a senton then tries a dive but gets cut off. Nese stomps away before working the neck as we see The Brian Kendrick make his way to the ring. Nese drops Tozawa across the top rope with a delayed suplex then tries a torture rack but Tozawa escapes and snaps off a hurricarana. Tozawa flies out with a tope and stares down Kendrick before going back inside and getting a nearfall with a bicycle knee smash. Nese fights back as Kendrick is up on the apron about to kick Tozawa when the referee intervenes. Nese gets pissed at Kendrick but that allows Tozawa to surprise him with a sunset flip for the win (5:50) **1/4. After the match, Kendrick gets into the ring and tells Nese he was sorry and just wanted to get Tozawa but Nese attacks him and leaves as Tozawa mocks Kendrick with a lesson.

Thoughts: The action was decent here but too short to mean anything. I’m enjoying the Kendrick/Tozawa feud with Tozawa getting revenge and it appears they might be doing something with Nese but it always seem like they have a direction with him only for it to be forgotten about. The crowd got behind Tozawa’s chanting a bit as that can hopefully get over more and more each time he comes out.

Rich Swann heads out to the ring as we see a replay from last week where Alicia Fox got a gift that turned out to be a box of exploding powder. He wants Fox to come out but instead we get a pissed off Noam Dar, who wants to fight Swann but Fox comes out and interrupts. Fox tells Dar she saw the face of 205 Live when first seeing him but since getting to know him he has shown to be immature as Fox says she has been using him and never cared about him after complaining about his cooking. Fox is also annoyed at how Dar pronounces her name and tells him to leave as they are through. Dar is distraught as Fox tells him to go as the crowd sings along mildly for him to leave. He leaves as Fox tells Swann she thanks him for all the gifts as he says they all came from the heart. Swann said Fox deserves those as Fox is about to give him a kiss but Swann stops her and talks about being friends with Cedric Alexander. He says Fox broke Cedric’s heart by leaving him for “Euro Trash” as Swann said the fact Fox was exposed to the whole world was his gift to her then he leaves. Fox says it great to be single anyway and acts crazy as the crowd gives her the “What” treatment.

Just a terrible segment. I do not get why fans would care to see Fox aligned with a babyface wrestler since she’s been portrayed as unstable and jealous or why Swann would get cheered in ruining someone else’s relationship. And the stuff with Cedric seemed awful as Cedric dumped Alicia for her behavior and not due to a “broken heart” as sadly, this romantic storyline will continue and no one involved will benefit in any way.

Daivari is now coming to the ring wearing gold chains and a shirt while we see a clip of him pulling into the arena in a Corvette convertible and yelling at the valet to not scratch his car. Daivari wipes off his boots after getting taken down. Ali comes back with a rollup then a few other cradles until Daivari boots him in the gut. Ali comes back with a dropkick then flies out with a somersault plancha. Daivari blocks a headscissors on the apron then knocks Ali down. He gets two after a back suplex on the apron then hammers away. Ali tries to come off the middle rope but gets caught in midair with a brainbuster as that gets two. Ali fights back and hits a hurricarana then runs wild. He gets two with a rolling neckbreaker then places Daivari up top. Ali flips as he gets shoved off then dropkicks Daivari in midair. He climbs up top but Drew Gulak comes out wearing a suit and holding up a sign saying that its a “No Flying Zone” as that distracts Ali long enough for Daivari to yank him off and hit a hammerlock lariat for the win (6:51) **.

Thoughts: The match was fine, if not forgettable, as they are continuing the Ali/Gulak feud. Also, they gave Daivari a new character but of all the guys in the division to push, there are more talented guys than him.

Backstage, Dasha Fuentes is with Gulak, who says tonight was the first step inThto protecting his future and says there is no place for reckless high-flying style and will stop at nothing to create a better 205 Live. Gulak’s character here is somewhat enjoyable, even if he isnt the most charismatic guy on the roster.

Perkins smirks and extends his hand but Aries slaps it away. Perkins bails as Aries sits cross-legged in the middle of the ring. Perkins returns and hammers away but gets caught with an arm drag. Aries gets two with a dropkick then goes back to working the arm. They go back-and-forth on the mat for a bit until Perkins reaches the ropes. Aries catches Perkins with a slingshot senton then takes him out on the floor with a heat seeking missile. Perkins manages to cut Aries off of top rope then dropkicks the back for two. Perkins stays in control and acts cocky before putting on a butterfly lock. Aries dodges a twisting senton as both men are down. Aries comes back with a back elbow smash. He runs wild and gets two with a side slam then hits a neckbreaker between the middle rope. Aries heads up top and lands on his feet and tweaks his knee as Perkins targets that by applying the knee bar. Aries reaches the ropes then Perkins starts kicking the knee. Aries fights back and they trade strikes until Perkins hits a chicken wing gutbuster in a badly botched spot as that gets two. Man, that looked bad. Aries fights out of a Detonation Kick and hits a back suplex. He knocks Perkins down with a forearm smash then hits the 450 splash but Perkins gets his foot on the ropes. Aries puts on the Last Chancery as Perkins is able to reach the ropes then he rolls outside. Aries hobbles out and brings Perkins back inside but Perkins hits a dropkick and tries for a Detonation Kick but Aries slips out and hits a discus forearm smash for the win (11:41) ***1/4. After the match, Neville comes out on the apron as Aries yells at him to come inside. Neville charges in and they brawl then Aries puts him in the Last Chancery until Perkins makes the save then stomps a mudhole in Aries. Neville takes over after that then looks at Perkins, who hits Aries with a Detonation Kick and Neville puts Aries in the Rings of Saturn while Perkins sits and watches as three referees break Neville away.

Thoughts: Good match despite the badly botched gutbuster spot. TJ is more natural as a heel and despite having a good match the crowd was dead for this. The post match stuff worked and the Neville/Perkins alliance could be a good thing for the division if they continue in that direction.

Final Thoughts: Overall, the show was decent. However, the Fox/Swann/Dar segment was horrible and this crowd was dead for the matches, including the main event. I think the show has some positives to it and are at least trying new characters but watching it and having the fans stay silent is a really bad look.