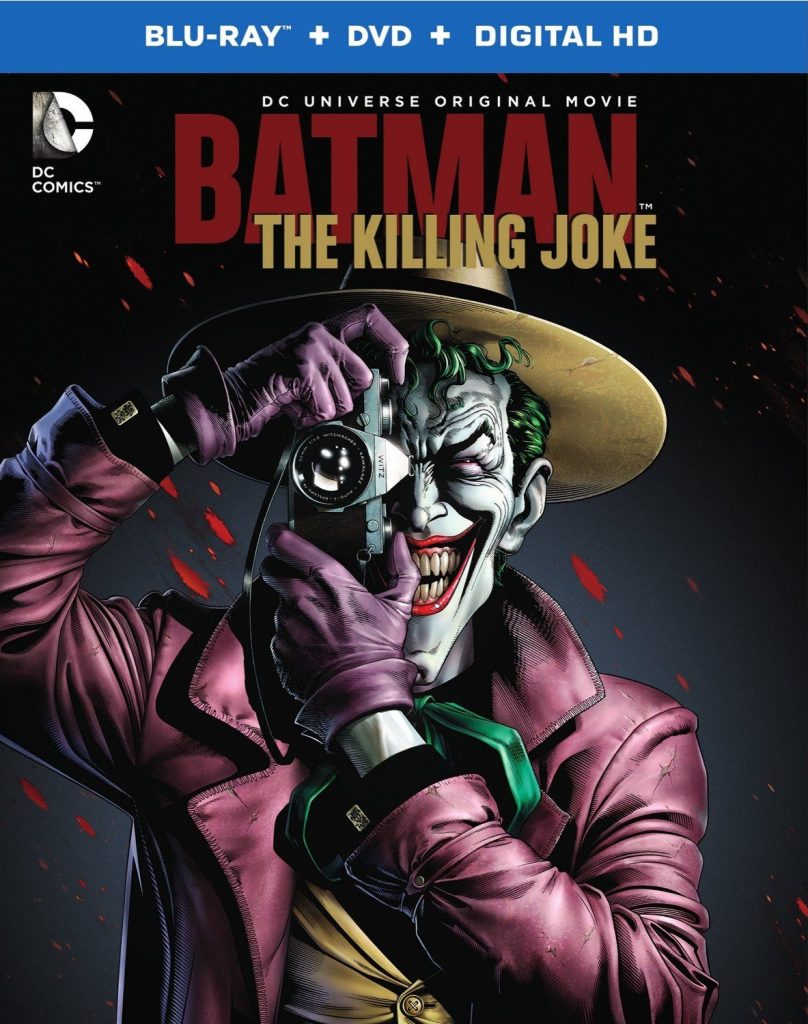 *SPOILER WARNING* This review contains plot details of the film. Proceed at your own risk.

Adapting classic and beloved stories can be tricky. Adapting ones with the level of controversy around them such as Alan Moore’s (in)famous Batman work, The Killing Joke, can be even more so.

So who better to tackle that Herculean task than Batman: The Animated Series co-creator Bruce Timm and popular comics writer, Brian Azzarello with acclaimed DC Animation Director Sam Liu? And while we’re at it, let’s throw in Kevin Conroy and Mark Hamill, too.

So all that credibility with the Alan Moore story should be an easy slam dunk.

The results here, though, are more of a layup.

It scores, but not in as spectacular fashion as might have been expected or deserved.

The high points are almost all in the performances. Kevin Conroy and Mark Hamill shine as they remind us why they’re the definitive voices of these characters for a generation of Batman fans.

Hamill especially turns up the Joker dial to 11 and goes for it like this will be his last time (it won’t be). The level of menace he manages to pull out of the character eclipses any that he ever achieved while working on the original animated Batman or even his time with the Arkham game series. There should be no question now that he IS the definitive Joker.

His delivery of Alan Moore’s words, especially his “One Bad Day” speech, will chill to the bone. In that way, the film is as effective as the material that came before it. Joker’s monologues ARE the show.

Kevin Conroy once again brings his signature style to Batman, but with a bit less gravitas and bit wearier cynicism. This isn’t the Batman: TAS take on the character. This is a man obsessed and driven. His drive often overriding his better judgment and raising the question of if he might actually be as insane as Joker himself. Even Batman appears to question if it’s all for nothing except the inevitable death of he and his nemesis.

Where things get weird is in the “prologue” portion of the film. Supplemental material was added to the first half of the movie to provide better context for Batgirl/Barbara Gordon’s role in the story.

Tara Strong lends an excellent performance as Batgirl, but the part is written oddly, even for this story. While it starts off fine and even a little by-the-numbers, it eventually skews into creepy territory.

She’s written as Bruce’s student and, implied to be, several years his junior. As most would likely expect Batgirl to be written. However, her crush on her mentor seems to run counter to how their relationship has been portrayed across most Batman media. Then it gets worse.

After a blow-up fight between Batgirl and Batman over whether or not she’s his partner in taking down a mentally unstable mob boss, the two wind up having sex on a rooftop.

And then it gets worse.

Batgirl is portrayed at this point as borderline clingy and even has an emotional breakdown at her job over it, taking out her frustrations on someone who might be her only real friend. It’s uncomfortable, poorly conceived and even more poorly executed.

The whole prologue could have worked fine without it and would have shaved about 5-6 minutes out of the runtime. And it would have given Batgirl the background unfamiliar fans needed to understand why Joker might target her.

Now let’s talk about another part the movie missed an opportunity to do something better with.

Blasphemy alert: The Killing Joke, as a story, is overrated and in places, poorly conceived.

As most know, Barbara Gordon is shot and paralyzed by The Joker as part of a plot to drive Commissioner Gordon insane. She’s also stripped naked and photographed by Joker and the photos used to torture Gordon later in the story. This is something the movie shows in the same fashion it was shown in the comic.

Was it necessary to adapt this story as closely to its source material? No. No it wasn’t. And Batgirl certainly gets the worst of it, again. While purists would have decried the omission of the nude photographs, the Arkham video games managed to show this story without them and still be effective. That story also gave us time to connect with Jim Gordon, who is supposed to be a big part of The Killing Joke.

However, Gordon is barely in the movie and thus the attempt to drive him insane comes off as a thin storytelling since we’ve had no time to actually connect with him…at all. He’s a background bit-player at best and yet the central story immediately tries to shift to him once the prologue chapter is over.

If they’d really wanted to make that work, maybe they should have focused on the relationship with Barbara and Jim Gordon rather than having Batman and Barbara hemming and hawing over their uncomfortable romance.

Call it the biggest missed opportunity of the entire film.

The book succeeds in this because it was built on years, decades even, of history between Barbara and Jim Gordon. Adapting it as a film means that some of the audience (a few in attendance with me, even) will never have read the story or much Batman at all, really. They don’t have the deep knowledge of long-time comics readers and thus don’t have the deeper connection to that history.

The film had a chance to build some of that and got it half right and half way wrong. It does manage to connect some dots toward the end and bring a strong conclusion with Hamill delivering a punchline that’s hard not to laugh at and be taken aback by at the same time with its parallels to he and Batman. Or even he and Conroy’s long history together.

To end on a positive note, the animation captures the art style of Killing Joke artist Brian Bolland as well as it should have been. DC Animation has done a mostly-great job of recreating the art styles of the stories they’ve adapted. This one should stand beside its other crowning achievement, Justice League: The New Frontier (adapted from the late great Darwyn Cooke’s masterpiece), as a testament to how translating stories is done visually.

And when the action heats up, it really heats up. The animators bring some of the best fight choreography seen yet in the DC animated films, showing that Batman isn’t just good, he’s a pretty good teacher, too.

While the movie did miss the mark on Barbara in many places, it gets one thing so right at the end it’s hard not to feel at least a little bit better. And for fans of Oracle, it’s a nice note to end on.